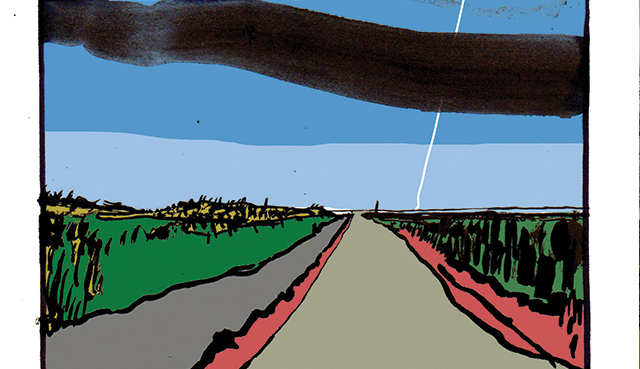 9th June – blue with some grey, then greyer. By Maxim Griffin
East coast – the overwhelming desire to mainline as much of the North Sea as possible, to live in a pillbox, to roll with the adders on the great dune and find a sunrise.

There has been light since half two – midsummer is coming – the wheel of the year has come off the axle – three months of Sundays – how long has it been? The Weirdness has scuppered time. The birds don’t really stop singing. Still, a fellow can rely on the sun – I always see it rising – bursting the ashen and orange clouds like a mace.

Earlier – I’d walked most of the evening.

I saw the colony of rabbits pour from the warrens and a thousand jackdaws out by the derelict church. I don’t know what lives under the sewerage plant but I heard them. Burbling, mewing, croaking things. Mystery pipes that lead out of sight. No sign of life from the caravan park – everything dormant. The caravans are static – no generators hum.

No one is quite sure what will happen to the economy of these summer places. Bookings are not being taken yet. Promises cannot be made. Bingo balls will lay uncalled. The circus won’t come to town. We’ll see.

Down in the creeks, various waders have walked about – stepping in the murk. A boat, Boy Harry, makes tiny sounds in the very low haven. The paint is bright, the vessel well kept – in the half light time it looks like an old photograph, not quite here. A single breath of wind ripples the sword wide blades of the salt marsh grasses. Something low out there, something low under the light – heron motion, egret weight. I never find any heron feathers.

The sea doesn’t sound real – more electronic wash than anything – a tape reel running wild – I can’t see gulls but I can hear them and their sound isn’t real either – more like ten iron gates grinding.

At the footing of the collapsed bunker is a yellow plastic bucket, maybe some seal bones in the scum – the concrete has been slipping into the water since the invasion was no longer feasible.

At the end of the track a gravel spit half hidden in buckthorn – beige campervan with all blinds drawn – the vibration of respiratory structures, male. Perhaps I will enter his dreamtime as I pass and scurry through marram. The strandline is close here – a few weeks without people around does wonders for the debris.

Wood, mainly. Poles and planks – some of great age – knotted things and salt twisted objects – part of a large tree, bark stripped and spidery, a naked tentacle tripod that sits on the sand like a newborn giraffe.

Disposable gloves are common litter everywhere now. Even here. They flutter in the dampness. Up a way – always bricks here – bricks and breeze blocks. Twists of reinforcement and something that looks like a fuel tank.

On. Ah. Good. I see someone has recently set light to a petrol go-kart – a gutted carburettor all black and shiny and chrome. No sun yet. The horizon is bright. Clouds coming black out west. I think I see a distant jogger. Something wobbly towards Mablethorpe. You’d be surprised how many folks get up to witness the sunrise.

Wind blows over the go-kart ruins – a skeletal high sigh, very thin aluminium quivering, burned leaf thin from the fire. A two-note call sign – cuckoo cuckoo. A rumble of hunger – it has been a long night.

With the smallest and most arid driftwood available, I fashion a tiny fire – enough to curl a few rashers of bacon over and boil a little water for tea. The flames burn in many colours as fat drips. I regret not bringing bread and eggs.

A fret of grey under the light – I dare say a dog walker will appear soon. I pull my boots and socks off and gingerly step over thin, greasy creeks – everything grey blue. I nearly trip. A circle of warped oak with two holes cut clean through – it has been subject to the sea for a very long spell. I work it out of the sand and hold it up. Big enough to cover the face of a man – strange things, masks – dead man’s eyes – the empty sockets frame the new world at the edge of things – a dog barks.

The burr of roads and movements of the day becoming clearer – the side door clunk of campervan – a big, unseen yawn. Holding the mask up to my face – it fits very well – a keeper for certain – with it I will startle blackbirds and ramblers alike. Best stow it away for now.

A few fat raindrops, almost autumnal. Cold toes – boots on – back into the dunes. The rabbits have gone to ground in their warren citadel – there are always bits of them lying around – parts of bone, parts of fur – good view from here – acid green flashes inland where a bolt of sun might hit – I count my progress home by the church towers I see from here – seven – two derelict – one turned into a home. I was nearly arrested at that one once.

Behind the dunes are iron red cattle and thin fences of barbed wire – from there the fields follow the ditches to the hills and elsewhere. A badger skull placed nearly on a gate post. A keeper – but I think better of it – best leave it sentinel. The world is stirring.

Back past that campervan again – sausages are being sizzled and kettles boiled. A good dog comes to say good morning. Nods are exchanged between the fellow and I from two metres apart.

Down the track by the pillboxes – a house long empty of people has been slowly exploded by a fist of sycamores.

I pull the mask back on and see the territory with new eyes. It is good to be back – onwards.