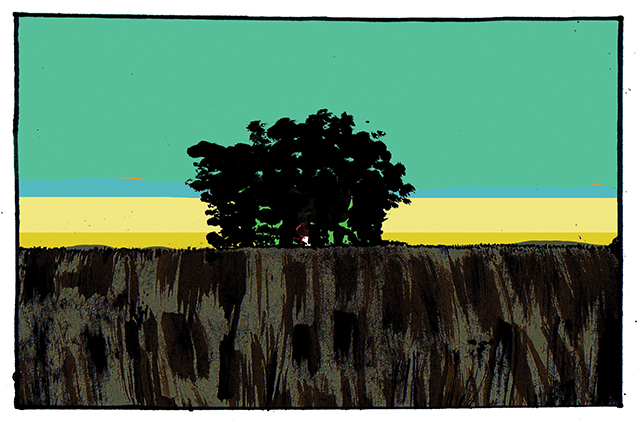 Clearing town with direction in mind – just onwards – west and out of here – out over the back of a filling station under which had been found the cremated remains of Beaker folk and Angles – soon a famous Scottish restaurant will emerge among the roundabouts where already stand sandwich chains, industrial laundries and a hospice – everything on the move – always transience – just passing through – the brevity of meat in bread, of stains, of replenished tanks, of life – I consider this as a roll is purchased – basic ham and mustard – no space for a pack up – rucksack is full of other things.

A lorry with eastern European plates lets me cross the road before resuming his journey north along the old straight track of Barton street. I aim across the territory with the rain – hedge to hedge where the bottom of the land always gathers wet – it sits rusty on the clay like battle blood – at the road with the passing place, a squad car is parked up – a clever person has changed the A of passing to an I. The fields are getting ready – green swirls to ochre – barley swirls in the breath of rain – wet July, the world still in the troughs of the weirdness – shops are open but pavement etiquette is still a dance of unsure steps and nervous smiles – still – we got off lightly here. On.

Permitted agricultural track with poppy heads and the leaves of a remarkable oak and one of those sycamores with blemished leaves – what was perhaps a barn once now a weedy barrow of brick and old motor. Text message – yes, I am still on my way – should reach you at teatime-ish – I have an appointment with an old friend – how long has it been – four years I think – so it goes – on.

At a small road that crosses the Wold, a near mummified blackbird – road flat – almost a fossil – quite alien, mostly dinosaur – an object to draw later – I place the remains in a small box I keep in my pack for such things – flints usually but lately I have been finding many tiny skulls.

Another track – bridleway – green dashed on the map in my memory – I know the way well enough – over the central plateau and across the burial lands of the heath road to an agreed location. Green light off valley wood, waves across bigger crops – weather shifting, muggy – the slates of a red farmhouse reflects the shadow of the chimney – there is steam, just, the grey returns – no matter – on – west – I pass no one.

I walk the lanes, B roads with high beech hedges that are good and thick – an occasional car – path south west – over the place where a hand axe was found – a deep time thing – 280,000 BC they reckon – just here. The vegetation makes flint seeking impossible – a mental note to walk out here again in the autumn once the earth has been turned again. It will be autumn soon enough – the passage of time has been so strange this year…

Typhoons must be up from Coningsby – afterburners grind the sky – can’t see – can’t see the top of Belmont Mast – I scuttle on – pause at Biscathorpe – the church is locked now but worth a snoop even when the nettles are high – the carvings are older than the building – they came from a building no longer present – cubist grotesques with lidless sockets and moustached kings with bad smiles – a pleasant day could be had making drawings of them – I plan to. On.
A river close and cattle – big red ones like those Georgian paintings – dungs and midges – an oak that grew around a barbed wire fence – gated road – up and over – a wet track, the soil a little sandy – somewhere around here is a glacial erratic – bluestone – dumped by the ice way back when and now hidden by the wet sway of the field tide.

Under a green lane with sticky sap rising trunks – under the dark green funk of dripping trees – I spy down to a run of the Viking Way, a couple on the move with dogs – first I’ve seen all day since leaving the industrial zones. Up into the roll to the west of the Bain now, where the Wolds cascade slow towards the plains of the Witham – I’m to meet my friend in woods a couple of miles on and so hit my stride as is often the way – 12 miles in and could walk forever now, mighty and strong all direction forwards – away, light falls to the wet roofs of Lincoln and glistens – teatime-ish now with the chosen wood in sight – there’s blood on my shin but I don’t recall being wounded – a wheat field with crows and Prussian blue sky that towers to the sun – my boots are slick with chalk clay splats and grass seeds.

One more long lane and off the official way – my friend has secured a camping permission on land away from roads – a copse of mixed trees within an ocean of turning barley – it is hardly marked on the maps – from the shadows under oak and ash a figure appears and I approach the island with sudden tiredness – packs off and greetings, the comfortable old joy of a comrade – we set to matters – a long draught from a can and the sudden illumination of flame – in the civil twilight war stories are swapped and enquiries made into the wellbeing of our kindred – you can keep the pubs closed – this is far superior. Light from beyond, the sun coming out elsewhere – through leaves the green – as across the sea of fields other clouds are bursting and the spectrum of white light is split into the varying degrees of the spectrum.

We stir meat over the ashes and embers – settle into the short night that never really doubles into full darkness and toast an absent friend who did not make it through the present wars – so it goes. We will feast when we can.