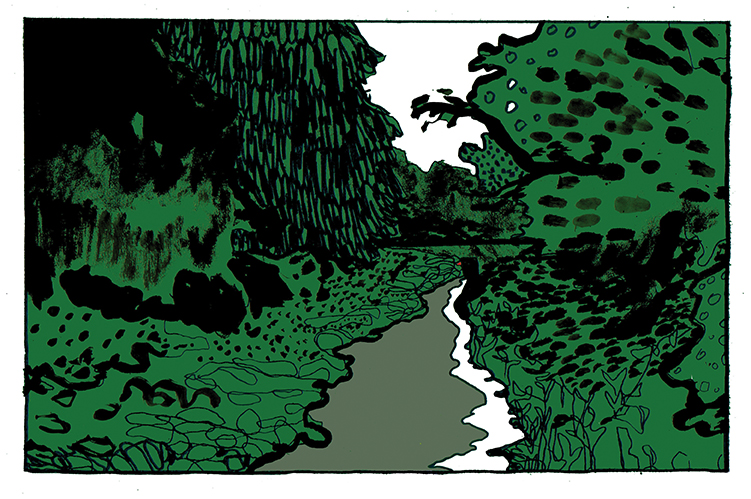 3rd August: eighteen minutes past nine in the evening. By Maxim Griffin
If I were to walk another way my journey to work would take two minutes and I would see no fish. It is good to be able to look at fish in the river before a night shift. The walk to night shift is my buffer, a clear spot – the green breather before the darkness doubles.

Now north – downhill – tighter, smaller houses – doors that open straight on to lounges – a baby cries – a converted chapel, dog grooming – road junction over a culverted length of the river – there was a swimming pool here – a big house surrounded by small, dense woodland with a streetlight within.

Now west – river below and left – peeling iron bars – debris gathers on the south bank – a Tonka truck, bottle of Mountain Dew, always a ball or two. Ex-mill turned flats – looks like the cover of Dub Housing – a couple of willows, sometimes a kingfisher – on the opposite pavement a man ambles with carrier bag (cans/pizza) – last of the sunlight glancing off 19th-century brick and radiates off a just parked 4×4. Clouds in fleet array – grey, heading to sea – it’ll be clear later – might see the comet again.

Bridge. Every night I work I stop here. Always have. The bridge is simple – cast concrete like a pillbox – I lean up and look – take a photo from the same point every night, same time too – 9:18pm – all year round – the nights are drawing in now, each photograph dimmer than the last – it’s a good bit of river this – a gin clear length.

There is crowsfoot below the waterline and a vortex of midges that twists up into telephone lines and ash branches – you can just see the old railway bridge up beyond – the Nazis tried to hit it, failed, killed a child. Further back, they pulled out dead Royalists along here and buried them up by the abbey after the firefight.

Car with bald man pulls up nearby with urgency but he does not exit.

In the deep brambles rats feed on the yet ripe fruit – sticky, sour juices in wet fur – I see them swim below the midges – you get bats too – taking elegant sweeps and dives – when it is really still you can feel the motion and mechanism of their wings – one wet night in the spring, the bridge was covered in thousands of woodlice and housed in the concrete is a citadel of ants. And now there are trout. I watch them in the current with their green electricity. The life of this micro geography is strong.

Footfall – a friend with his dog.

“This is the fourth.”

Smells like someone has lit a disposable BBQ and there is a heron stabbing at the water below the next bridge – the available light divides the river into shadowed south and pale north – the bubble of water and the hum of distant tarmac – Sunday evening changing gear to Sunday night. The full moon’s coming – Jupiter and Saturn – there’s a tabby in the rhubarb and the progress of the year has become evident: the nights draw out. Each night the photograph I take from the bridge is a little more grainy – splosh – I lean over and spy a trout at the waterline five minutes before I need to be off – a slug of fizzy water from my rucksack – bats wheel.

I don’t turn – something on edge in the tone of the questioning – this has been rehearsed.

“You’ve been seen on this bridge most nights for weeks.”

“You’ve been reported to us as a suspicious person and we’d like to know what you are doing before we decide whether or not to inform the police.”

Bat through the midges like a Spitfire – I declare myself in a roundabout, serpentine way – my journey to work and an inkling of what that might be – a matter of confidentiality, you understand –

The man eases a little.

He says he has never looked up the river this way.

Looking is important – sometimes there are things right under our noses – have you ever read Georges Perec? How about Basho? Those were lads who knew the importance of a good look.

“Well, I’m glad you’re not planning to burgle the flats.”

“No, I don’t have time for that – speaking of which, I’m due on in five minutes – cheerio.”

The next day passes as I sleep – the next night turns up again.

Time to buckle up, the last dregs of coffee drained – out the door at the usual time – gunpowder clouds with an atomic, western blush – no footfall – I walk the usual way – the streetlights flicker on in sequence – amber cascade on Victorian redbrick – Monday night – bins out for the morning collection – black bins – all tainted with extra bin smell after a week of heatwave – darker and fresher tonight – there are crows in the ash trees and blackbirds in the willow – that tabby on an old Saab – hot bonnet, Grateful Dead sticker in the back window. A curtain opens.

I stride over to the bridge and lean up – gloam over the river, still but still with bats at mealtime – a big truck heads into town with the livery of Lars Thorwald – the night looms, my shift begins soon – Jupiter rises first, then the moon and Saturn with her rings brings the dawn.