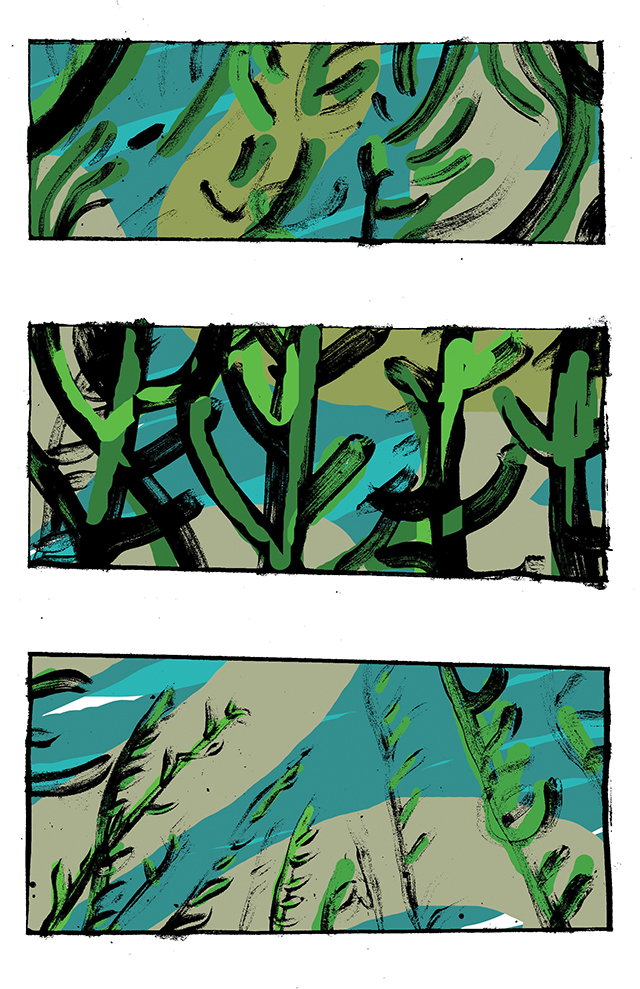 7th September 2020: humid air/mackerel sky.
Heading south – a quick drop off, cheerio, sights set on a bus to catch some miles and hours away – keep the sea to the left, walking on the flattest sand for the sake of sore ankles – the way is simple enough – south – trudge out to the edge of water and take a few moments – binoculars perhaps – the sea is busy today.

At the perimeter of sight – right where the earth is seen to bend, 90 giant propellers in great array rotate. I can see the blades over the edge of the sea and the tip of a crane, I think – some kind of support craft maybe – a deep hull painted in deep orange – difficult to tell – the light keeps changing. I only use one eye-piece of the binoculars my father gave us. I hold it up to my face like a film camera – seems easier and I don’t have to remove my own glasses – pull focus – reflections and movement. A change in light – tip of turbine white against slate grey, for a moment – then nothing – huh?

A man in tennis clothes pulls hard on a cigarette – standing a metre or two from the end of the lens, eclipsing my line of sight with his chest – small dog in tow – faded tattoo on left forearm – a swallow.

Pull focus – the windfarm is 20 odd miles away – a tanker out there now stacked up with containers heading towards Humber – billions of pounds in a single squint, hardly visible with the naked eye.
A herring gull dunks below the surface of the North Sea and into the canopy of the kelp forest.
I can see the shade of the sand in the shallows – last trace of the islands that were out there – pull focus – down coast – that’s the way I’m heading – some kind of dredger – huh? Another human eclipse – mobility scooter, permanent hair with a tint. Most Haunted fleece, face shield – two starlings on the nearest railing. Cough.

Best be getting on – south – the occasional ruinous chalet/golf course/caravans. Schools are back now and the season is ebbing away – some folks still making the most of things – awnings up, washing out – plastic seats and little tables – bingo and a fishing pond. There’s a playground – the kind you used to see at certain pubs or Happy Eaters – a dayglo ape with swings suspended under arms – biceps bleached by decades in the sun, chains steady in the breeze.

Huttoft Bank car park is half full and the bins overflow – tinfoil trays – chicken packs – broken spade – plastic gloves – soft footprints where the tarmac is engulfed by the advances of the beach – a child’s shoe – always a child’s shoe, a red rubber thing to fit a toddler.

Pull focus – out across the inland – church, copse – cut field – Betjeman liked it out here. A yellow car speeds on Roman Bank – on – Mogg’s Eye, seems different to how I remember it. Anderby Creek – curious place – reminds me of Amity in Jaws – feels almost like some exclusive Long Island community. There is a good café and the houses overlooking the sea are handsome and strange – I would be content to spend a winter looking on the sea from one of those windows, waiting for some vast ancient terror to emerge. Yes, Anderby Creek would be the ideal place for that – a good place to bunker by the ocean Down towards Chapel, the oblique windows of the North Sea Observatory reflecting backlit grey clouds that hang somewhere off the shoulder of Triton Knoll.

A sign – Dogs on Lead – March to September – down on the foreshore a black Labrador plunges, giddy, in and out of the churning shallows. Another sign – 1,000 yards – Real Ales, Lagers, Hot Snacks, Admiral Benbow. Concrete promenade, casual footfall – younger kids, the retired, more than once a small dog in a pram – the lure of the pub is strong – not had a sit down pint since March.
Best be on for now – the promise of a function here later in October – cake stall, book stall, hot beef rolls – I could murder a fete.

From here to the river Steeping lies the sprawl of Skegness – the Derbyshire Miners’ Convalescence Home looming – shut/haunted – coughs carried up from the underworld of midland coal seams.
A starling lands on the railings – there’s the trace of funeral rites again – flowers gaffer-taped to metal, faded message. The starling flits elsewhere, lands on one of those statues of a cone of chips – the ones with the face and the leer – all beady eyes and gurning – Chip Golem, old god. The starling flies on – a cup rattles, someone coughs.

The unofficial city of holiday parks seems quiet – greyer, midweek. Curtains pulled – awnings closed – the nomad masses are elsewhere. I can hear local radio, smell bacon but see no people save the occasional dog walker. At Butlin’s there are cars but not many and the rollercoaster is at a standstill.

On – more houses right by the sea – ordinary semis with a triumphant view – the vastness of the nearer shore wind – I can hear it – the hum – warning beacons pulse through increasing murk. A squall is building now – no matter – along an entrenched path through spidery dunes – a couple in plastic visors find it hard to socially distance. I head back onto the beach and into the building weather – it’s good – the groynes along here are thick and battered – deep brined, fossilised kingdoms for tiny crabs.

The wind picking up strong now, furnace blasting – head down, march on – Skeg pier in sight but I’ve got to bear up onto Roman Bank and find the bus north – another pub – looks quiet but there’s no time for a meal or a pint. Bus o’clock – waiting – there are layers of posters fading on a wall – circus flyers taped to lamp posts – faces you remember, seems like another world ago – Ken Dodd’s eyes.