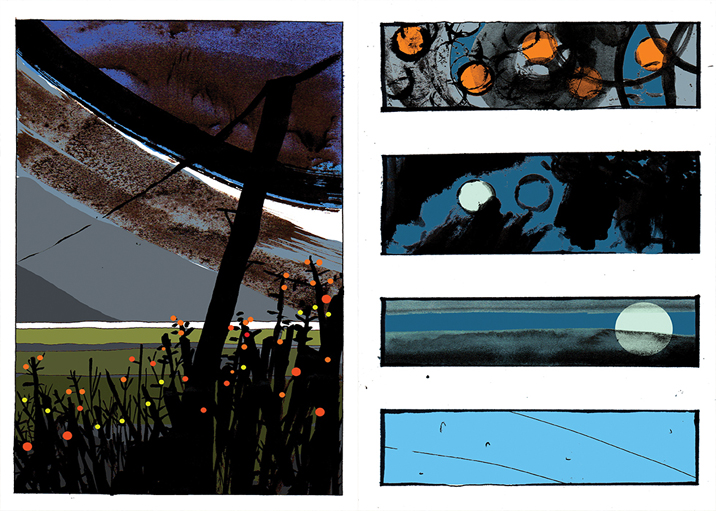 6th December – fog bound / bog ready . By Maxim Griffin
Picking the best names from an index of Lincolnshire waterways. Somewhere close – can’t go far – tier 3 y’see. The Harrowsea Drain has a good ring to it. The Great Eau maybe? Grayfleet – does the job – close, good name. I light out quick – the usual provisions, boots that have seen better days – I’ve superglued both heels back together – that’s been a theme this year – bodge fix, hope it holds.

As November retreated the mornings got sharper – hoar frost coming, clear nights when the temperature plummets around 4am. I work overnight close to the river’s edge – murk rises off the body of water and then the fog hits around about 7 – comes with the tides, comes with the gulls as they drift inland.

The Grayfleet springs above ground in a warren of late ’90s semi-detached houses – you’d hardly notice it as it trickles up under a canopy of ruined brambles and blackthorns – the sloes are fat and untouched, beaded with winter sweat and robin pecks.

Keeping the trickle in earshot – it soon turns into a ditch deep chalk stream, camouflaged by the undergrowth – the little lane that runs parallel isn’t sunk like a holloway but does twist east hidden by a cave of thorns and oaks and apples – the odd hornbeam, occasional detached houses with an air of Grand Designs.

Where paths aren’t available I scamper down into the Grayfleet’s belly – there’s enough room for one fellow to walk by the side of the water – a rabbit run path maybe – smaller birds occupy this hidden space and I’d like to say there was a kingfisher but I couldn’t confirm it – too fast, too blue in the weird light of the underworld. A plumber’s van passes within inches of me but I’m unseen and in no danger.

The course of the Grayfleet scribbles under the landscape for two miles like automatic writing – little loops and tiny oxbows – in a copse of ash the banks narrow and the water acquires speed and weight – enough for bigger fish – there have been loads of trout this year and more herons in the last couple of months too – must be a good sign.

The Grayfleet meanders and riddles across the outmarsh – a murder of crows in the direction of the turbines, a fine rain that soaks in quick – a house surrounded with pine bushes decked in sequenced Christmas lights that cascade downwards – white, green, red. A track marked for a gas company – pipes and trucks on hard-standing half a mile down – extracted fossil breath from the deeper times of the earth.

Each lane has a leaden poetry in its name: Poke Ln. End Ln. Ings Roads. Saddleback East – and the further out you get the smaller the fields become – sticking to the old pattern – hedgerows that held the ground in place since all this was drained. The murk drawing in now – what sun there was is a pewter hole in the fog – cold too – properly winter cold – good.

There’s fog on the Wolds too – iced breath up off the Bain maybe – an arrow of sun towards Stenigot – the tip of Belmont mast above the cloud, all shiny and chrome.

Back in the outmarsh – the disc of the sun reflects on the wider Grayfleet – a pumping station of the mighty Marsh Drainage Board that keeps the water table nice and spirit level.

Poke Hill – North Poke Lane – telegraph lines, wire fences, the only trees mark old parish boundaries – the stump of Skidbrook out there, the four churches of Solaby too – jackdaws.

The sun playing tricks – almost blue sky directly above – fast rippling mist at ground level surrounding – an arc of refraction just appearing – the blade of a rainbow never quite manifesting – nothing moves on the Grayfleet – just fog and steam – a little ambient track hum from the coast road.

The heron does not move – I don’t move once I realise – on the other bank – waiting on a fence post – a yellow eye locked – I can’t even see it breathing. Squatting for my binoculars and rummaging as quietly as I can through my rucksack – of course, today I wrapped my sandwiches in tinfoil. The heron is without motion – I pull focus – something not as it should… it’s a decoy. I curse it out loud – they used to call herons shitepokes y’know.

Might as well have my lunch and a brew – it’s mid morning, I’ve walked miles – a bit of cheese and pickle might temper my embarrassment. Once I saw the limbs of a silver birch glitter with bioluminescent fungi only to find out later it was the stray beam for a projected Christmas light – ah well – at least I’m keen.

Five geese coming in below the radar – the plastic heron reflected through fog on the Grayfleet – geese wings braking and beatless as they glide to water level like spaceships – pink footed – they are up in the air again in seconds – spooked either by my presence or that of the decoy.

I can see hi vis jackets working on something and the red iron of a post-war barn – a pub under works – it was painted sky blue last time I came this way – battleship grey now – little lights up, twinkling optimistically. I trudge on a little – the Grayfleet meets the Eau, meets Six Drains, meets Haven – where the little boats and curlew are – with my back to the sea, facing the end of the Grayfleet – a full fogbow blazes to the north – like those rainbows you get over waterfalls but almost bone white, only the faintest trace of spectrum – almost impossible to photograph too – good. The murk rapidly burning off – sun refracting through all the vapours – a strange masterpiece of atmospherics – tricks of angles and light – I head back inland towards the hills again.

Crossing the boundaries back into town a couple of hours later – I stop to penknife branches of holly for home and a heron watches from a fence post near the spring of the Grayfleet – I can see the breath of it.