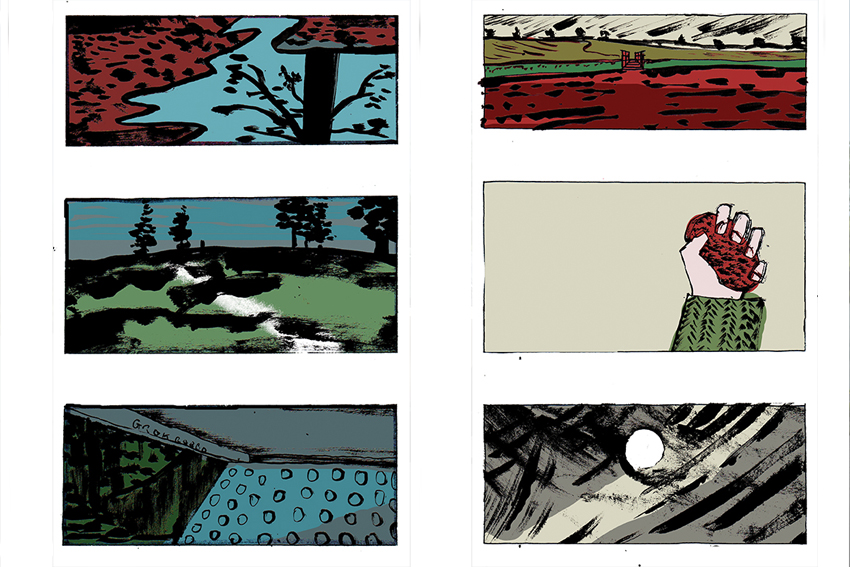 Buckle up, bunker down – back in the pillbox mind. School’s shut a day after opening – the Christmas tree still standing.

My sons know the drill now – lockdown fast becoming a regular feature of their childhood – six weeks of Minecraft? Easy. There is protest when I order boots on, though the dog is willing.

Head out west – twenty minutes’ sharp walk and we are skirting the edge of town – the boys know the etiquette – single file, step aside to let others pass, social distance – a parliament of joggers steams by – it’s cold – icy in fact, a hard hoar earlier that didn’t turn.

Cutting behind new houses and over the dormant golf course – no footfall has cut the frost yet – we leave a wake of fourteen feet and bound down and through the far car park of Hubbard’s Hills – it’s busy – fair enough – maybe we’ll check on the den later, it’s been a while.

Leaping a stile to the new flood drain – a rogue cockerel in the thicket – amber, green and blood orange red – yellow black eyes and a strut. The youngest son is most impressed.

The new flood drain siphons run-off and overflow to some secret underground chamber – the tributary that flows is much faster than usual – high too – I keep the dog on the lead.

A slick and skiddy path up to the remains of the Louth to Bardney line – in the hollow of the embankments, a tunnel of trees and dead limbs – a scramble enough for sons to declare it an adventure. At the end we are under another road, a hidden bridge – that tight mid-Victorian brickwork green with constant damp – another place for echoes – not strictly on path, not on farmland either, such places in between have much to offer. The arch flattens our shouts, the reverb compressed – pebble skitters across puddle and stick hits stick, a few minutes’ improvised concert for occasional robins and the doubtlessly concerned fox population.

Doubling back through the fallen limbs and the tunnel of trees looking very much like we are going on a bear hunt – the tunnel of trees is gated ahead – the straight line ahead has much appeal to my boys who make short work of the five-bar – I explain though that the way is forbidden and point at the sign – NO WALKERS – there is a bluntness to the appeal, a long-held irritation – I explain to the boys what the meaning of the sign is and back over they come, the left boot of the youngest slipping on the last rung – rising, he flicks mud from both hands and proceeds.

Beside the bottom of a rolling field – y’know the field that came as a default background with Windows computers – imagine that but frozen, fogbound and the first wave of hail coming in. Everyone careering ahead now – the winter squall swallowing the hedge end – weather that stings – we thunder on.

There’s a heavy gate ahead – I send the lads ahead – water running off the field forms a quick stream, water sorting the degrees of grit, sand and clay. The gate is a spring loaded job – the lever is stuck – ice-welded – everyone pitches – the spring grinds – we work it a few more times – heave – clunk – it’s free and the gate squeals open loud – we let it swing again, the squeal is good – like Ornette Coleman, the gate has an upside down melody going on.

Two very professionally dressed walkers are ahead. Downhill – a length of river wide enough to refer to as a lake, a local name for this place is the Twisties, but you’ll never see it written anywhere.

The professional walkers have watches to measure pace and stride and heartbeat and proceed in short quick steps – we make way for them as is etiquette and say how do but we receive no response and they go onward into the spitting sleet.

I am asked “What’s for lunch?”

“Them,” pointing toward the walkers, professional walkers like that are okay but a brace of good proper ramblers are best for eating.

Flapjacks are handed out and munched while ducks arrive on the wider water – hard frost still in the reeds. Cutting quick over a wooden bridge and into a tangle of thorns, yew and little exposures of chalk where rabbits have quarried, then over the railway embankment to another field edge – diagonal and up – the path is only a half tamped trace in the plough work – ruby red clay puddles – over we go – there are pebbles all around.

I am handed many – good fist-sized ones – perfect hammerstones for knapping – makes sense – there has been evidence found of Neolithic flint works just over the way. The pebbles have an older story – they came with the Last Glacial Maximum, riding the underside of the endless towers of ice. I pick two equal in size and shape – quick wash in the puddle – one is granite, red granite from the same river that once flowed in the far north before the deep times – the other is a bulb of flint – a relic of an ocean bed when all this was Pangea. Look – see – within it are the patterns and edges of tiny seashells that belong to things more ancient than any dinosaur.

“What kind of soup?”

We troop on and back, slide and gloop over and through the mud, using our sticks to vault the worst of the slurries – sleet turns to actual snow for a second or two, and speculate on the arrival of the daffodils. A glimmer of blue sky turns to undercoat grey – the youngest looks cold now – best be on, collars up – there’s more weather ahead.