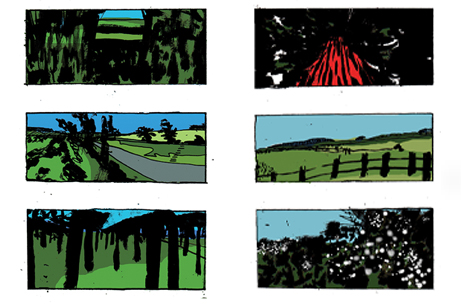 7th March – Turner was right. By Maxim Griffin
Sunday. First full day off in a spell – the night before was bitterly cold, clear, leaving a mist at the dawn break. That murk burned away with sunrise – beams scanning brick and steeple – the incoming gulls illuminated from below, white bellies orange with the glow – the full disc coming up redder than red – sandstorms in the Sahara again.

Boots on, a rapid breakfast for various sons – out – this is not a day to be wasted. At the end of our road we toss for it: heads east, tails west. Tails. West it is. We’ll head into the hills until there is mutiny or bloodshed.

We plough on – a few dog walkers out – most we know – cheery ‘good mornings’ and comments on the quality of the blue sky, questions of wellbeing. In the market place a police car pulls up and the constable nips into Greggs – he returns fast with a tray of coffees and a sack of baked goods, the grease of which is already making the paper transparent. Two joggers jog past, healthily.

Onwards. Through the old cemetery where the headstones lean along the boundary in ranks – we read a few: she was young – he lived to a good age – this child died a week after America declared independence. The slates are finest to read – just cut elegance, fresh still – quality stone you see, from Wales and the Lakes.

The light is so clear even the eroded inscriptions are pretty legible – there’s the work of the same hand, look, the way he cuts certain letters. And the angels are weird – it’s a local thing – early to mid-19th century angels all look like John Prescott. My third son machine-guns an elderly lady walking a terrier – she doesn’t seem to notice so he lobs a grenade in her direction and mimes the catastrophic effects of shrapnel and screams the Wilhelm scream.

There are cattle who do not mind our passing and we cross the bypass – a suggestion of leaves returning, in other fields there are lambs – the boys charge ahead to the woods that crown Skeleton Hill – we’d stop and muck about but someone is in there ahead of us, taking photographs upwards into the bare canopy. Leave her to it – we can come back this way.

Downhill – over gate – over road – downhill, uphill – more cows – we watch one defecate and this is a source of tremendous amusement. I haven’t walked out this way for over a year – it hasn’t changed – good – the youngest has spotted an actual tractor in an actual field and his faith in magic is restored. That’s a path that way, so that way we go – the youngest takes point, ravenous for tractor but it is nowhere to be seen – only the shadows of clouds move. It is a good moment for a flapjack.

We cut hard and fast into deep woodland, a dusty and flinted track in the hollow – good place for an ambush – a breeze through the bracken and dead fall – go, find sticks.

Up the eastern bank to a chalky place, an exposure of wet, crumbly stuff that cakes boots and stains trousers – it doesn’t matter – a view over half the valley – path, a shallow stream – over on the western banks, pheasant housing. A good pack-up is shared out and I tell the lads about the panther of the Wolds – there is some confusion between that and the Marvel character. Good.

Below walk a pair of walkers – third son cocks an imaginary bolt and raises his stick as though he were the Jackal – the youngest sucks on a cube of watermelon.

We check ourselves and our surroundings – leave no trace – scampering on deeper – there was a big house here once, before the wars – no trace left except a few bricks here and there – the whole place absorbed into a bigger estate, materials recycled, gardens dissolved into woodland – here and there a few out of place trees survived – acer, a laurel or two, a redwood. There’s the site of a house on the other side of the hills where bamboo grows freely through the forest. There’s another house, closer, where you can still pick aromatics from what was a kitchen garden – ruins for another day.

There’s an AWACS circling, high altitude. We see it through the canopy as we move into the open – the youngest is flagging a bit so he’s on my shoulders – we cast a long, four-armed shadow. There’s something else, big, circling over woods a mile of – buzzard maybe, kestrel perhaps – riding the thermals of late morning – we’re heading that way so maybe we’ll see –

The second boy finds a tiny piece of plate on the track – looks like Willow pattern, thousands of tiny imperfections in the glaze like a map of many rivers – it has been at least one hundred years since this china’s last meal.

That bird comes back into view – big – under the vapour trail of the circling AWACS – the children speculate: eagle? Condor? Albatross? A single piercing call – a red kite – shadow in circles, on the lookout, riding the warmth of a clear morning in early March.

We turn east again – cutting through unofficial paths and between a wide avenue of blackthorns – a thin spray of blossom already, a preview of the main event – good – it has been a glacial winter. Looking north the fields are green, coming up – the territory looks well – give it a couple more weeks and there will be leaves on the trees again – touch wood we are coming to the end of the Weirdness, perhaps soon we can get out to the sea and catch up with the news from Doggerland – one never knows.

Barrelling back to town full-tilt, a promise of lemonade to keep – the pumping station has been sprayed in large white letters – anti-mask stuff, hoax stuff – we look at the lettering – nonsense in a tall leaning script.

The third son pulls the pin on an imaginary grenade.