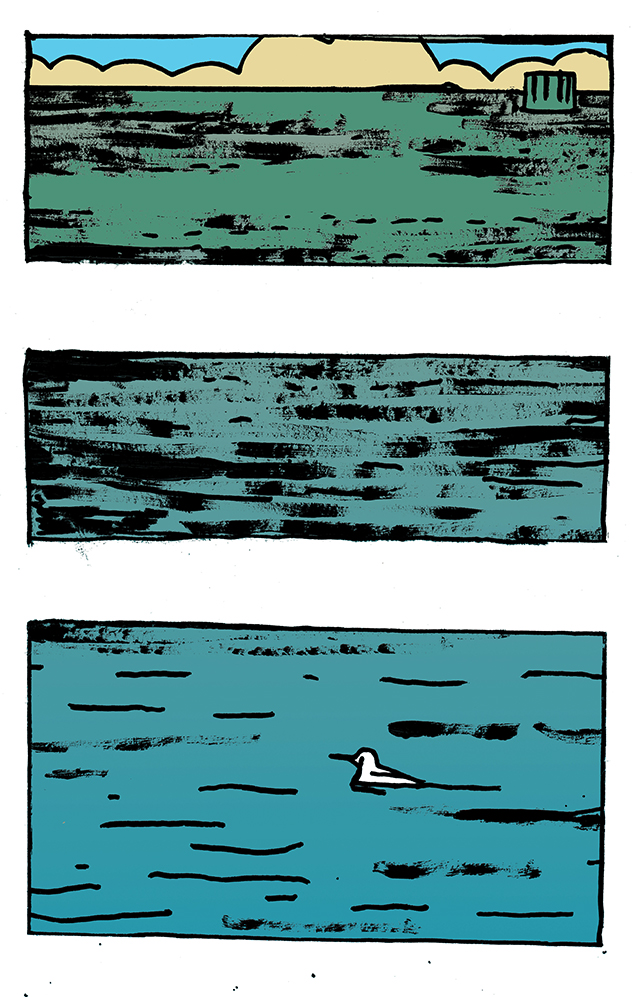 The yellow is back – in blocks and in divisions, the oilseed is up – acid bright, weird smelling – there is something quite sublime about the contrast between the crops and the sky – yellow and grey oblongs, occasional glitter of gulls in chance sunlight.

It is raw. Two days of shorts and T-shirt weather before Easter tricked everyone – squalls and flurries returned from all angles – very fast clouds.

Turbines in motion below Humberston and across the water on Dogger Bank – look – the stems of the furthest wind farm recede over the horizon – the visible curve of the earth.

Covenham Reservoir is a good, strange walk – the structure occupies this landscape with the weight of a hillfort – massive banks shielding the outmarsh from the 11 million cubic metres of water within – you can circuit the perimeter on a promenade of reinforced concrete – a barbed wire fence carries traces of sheep – a magpie pauses, feathers in the sharp breeze, pivots beak and glares, letting out a rasping call.

The view is good – up above the marshes and flat – Immingham to Skegness, the length of the Wolds and all the things at sea – it’s a good perspective – slightly removed, viewing a diorama – landmarks painting it with a broad brush, miles away – spire, dock tower, looming range of mashed potato clouds – the cows are small, far away.

The are a few people about – dog walkers mostly – a gaggle of children, windswept – family pets for the most part – Labradors, cockasomethings – a neon orange rescue ring frames the crescent moon that is just visible at the edge of the southern sky.

On – the Louth Navigation cuts into the north – a large farm with wooden electricity pylons – the land around is absurdly flat – spirit level – an iron bridge, pipes – on a further roof, solar panels glisten – white birds on a green field – in the east, yellow and grey oblongs – the yield, the sky.

The afterburners of jet fighters – two – heading beyond the coast – a sound that scolds the ears – something floats just below the surface of the reservoir – signage warns of mysterious and deadly algae, of the perils of swimming – the water is colder than the sea – recent debris – those few warm days before Easter have left their archaeology – the gutted remnants of a disposable grill, tins of fruit laced cider – I hold my hand close to the ashes but the ashes radiate no heat.

A concrete ramp into the water – other debris – fluff, butts, parts of birds, hay – a moorhen scoots through it all, ducks are coupling in green wave laps – a depth gauge below the strandline – a sudden plop – a child from elsewhere has hurled a pebble – he’s got the knack, a real pelt – the next pebble is launched and hits the surface with enough angle to skim – four elegant bounces then down into the depths.

There’s a boating club situated in the northwest corner – nothing doing, only the rattle and ping of ropes and metal, the clatter of rigging – from somewhere, a single thrilling curlew – two long hairs, about 17 bimble by with rucksacks and skateboards – I step aside, after you, gentlemen – one, the red haired one, replies “why, thank you sir” – I think he was born the year I went to university – blimey.

A turret sticks out of the water – there’s a pier out to it secured with anti-climb paint and razor wire, numerous danger signs, cameras – the tower is for the limnologists, who study the ecosystems of the inland – presumably, the inner workings of the limnological tower extend under the surface – I imagine there are all manner of dials and equipment within – brass things and gauges, clipboards of obscure but essential readings, lab coats.

Local kids scaled the limnological tower in the summer after the first lockdown – a photograph from the Grimsby Telegraph – disposable barbecues, fruit ciders. The sky clearing but still fast – the water shifts from black to ultramarine, the shape of the waves, the shape of cut obsidian – the temperature drops, sharper than raw – clouds low to the west dumping something over the top of the Wolds and in the direction of Stock’s Furlong, the squall devouring the stand of Scot’s pine that marks Beesby Top – ugly weather moving quick. I trudge on at pace to keep warm – the sun is out over the south but that system is closing in – looming high and deep – there’s a fella hunched in the concrete watching the birds clear off – a hard shower cuts the reservoir in half, sleety drizzle coming in sideways – rain in Hodgson brushstrokes – the fella clears off, back to a van parked down the slope – you’d hope he has a flask to hand.

The short building of the boat club is all shuttered up – the familiar signs – behind it is a little shipyard – skiffs and wind surfing things – cobwebby fibreglass sunfaded – wind howling on ropes and tarpaulins – a great blue sheet flapping where the grommet is torn – a small, fast bird flies from a canoe – perhaps the canoe shields a nest – across the plain, the main road to Humber is beneath the action of falling clouds – might be time to head to shelter – there was a bird hide around here, gone now – would have been an ideal place to bunker down, fire up some noodles.

Collar up – I’ve got to face the weather and get into it – a few full breaths of proper snow, turning to hail, then rain – a rush of starlings then the sun comes out as I reach the stile at the south bank of the reservoir – the weather already heading out towards the North Sea. Two jet fighters come in low, heading south west – you can set a watch by them – two fighters always return to base around quarter past three, low enough to make out livery – a field of oilseed bright and bold framed on two sides with black trees – a man sits at the open boot of a Volvo, checking camera equipment – the boot closes and he trudges up the slope and a squadron of ducks swirl down, wings braking, landing gear lowered.