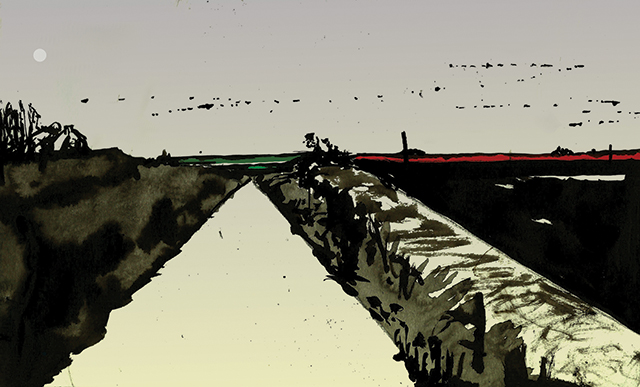 Walk 9: 27th October 2017 – Dark, brighter later.
One does not approach the fens lightly. This is a land reclaimed from the sea, ruled by power lines, dykes and cabbages – it would be easy to dismiss such places. Indeed, the fens are bleak but in that bleakness is a rare majesty, the kind best experienced on foot and in the worst that the elements can throw at you.

I head south, the stump of Boston over my shoulder, along the Forty Foot Drain for as long as I have time for. Perhaps this is a walk best undertaken alone and at the back end of the year. The Fens look their best after the ploughing is done and when the fields are black.

There’s no need to consult a map – the only way is forward and south. I climb the eastern bank, better to be a metre of two above sea level and make way through wind twisted yews and scrub. I plant my boot into an unseen cow pat. It’s fresh. Ahead, two young bullocks chew grass. I slip around them and off they trot, back the way I came. Usually there is a sign to warn you of oncoming beasts – no matter. I come to a smashed gate and behold the herd. The bridleway is full of cattle for as far as I can see, climbing the bank again I can make way without disturbing them.

From my position I can see further than I expected – Spires at Sleaford and Grantham and beyond them to the hills where the A1 heads to Stamford. Stamford is twenty-six miles away via footpath and track – doable, but not today. A bright yellow helicopter ambulance comes over and I hear the distant sound of sirens. Across the water, a house half-eaten by undergrowth, cracked from chimney pot to earth. I see the first geese. A dozen turns to hundreds – easting, to the Wash. Flapping and honking, a great skein becomes many, a shifting formation, no clear leader but plenty of stragglers.

Walking on into Bicker Fen where the power lines cross the path, the call of geese mixes with the wind curling through pylons. Lots of pylons. Wind turbines too – I count eleven. I stop to listen. Wind, feather, electric, water. Starlings murmurate over black fields – dark above and ahead but there is light towards Kings Lynn – a pale yellow smear against slate grey. I bunker down in the hollow of a battered yew and fix myself tea on a tiny stove, cupping the flame from the wind. A tawny heifer is curious enough to come close but bolts as soon as I put my cup down.

Onwards – a small freight train rattles towards Boston, bright red containers catching what light there is and the sun arrives. Everything in contrast, dark blue sky north, trees in full autumn, the high side of a lorry, red brick farm building – mist rises of the water a mile off.

I catch up with another herd. Trundling some way ahead is a tractor and trailer dumping heaps of cauliflowers and broccoli, leading the cows south. The way onwards is paved in brassicas. I could head on, to the River Glen and on to Stamford, back into hills and out of Lincolnshire but I double back somewhere near Dunsby Fen. It is now when I wish for a coracle or a skiff to carry me back to Boston.

The weather doesn’t know what to do, so does everything at once. Boston Stump is lit up, but I walk with a squall at my back. A sign, warning fishermen of the overhead wires has been used for target practice – .22 bullet holes I reckon. A red brick wall without a house for context with a buddleia growing out of it – a few lines of barbed wire for good measure, something black and plastic caught on the spikes.

I skid down the drain bank a little and use half a yew for a bit of shelter from the elements. Two larger signets glide by. There is movement under the water too – something bobbing about in search of surface insects or the spiders that lurk in the reeds. A moorhen changes direction under the reflection of a pylon. Even though this walk has been straightforward enough there is a sense of disorientation – only a few distant landmarks to position oneself by. The sky darkens again and the photos I take with my telephone show very little colour.

It is easy to see why fenland is rich in folklore. These low-lying places are rich in superstition. This is the land of the Tiddy Mun, a race of wee folk, bog dwellers made refugees after the Dutch engineers drained this territory in the early seventeenth century. The Tiddy Mun were blamed for the rise in swamp fever, beasts going lame, disappeared children – the locals would offer water back to the earth in the hope that it would calm the pestilence: ‘Tiddy Mun, wi’out a name, Here’s watter for thee, Tak tha spell undone.’ It’s an interesting idea, old magic to settle a new land – there are similar stories across the east of Lincolnshire, the giving of gifts to the rivers and wet lands, like the famous Witham Shield which dates back well before the Romans came, or the thirteenth-century sword also found in the Witham bearing the mysterious inscription ‘+NDXOXCHWDRGHDXORVI+’.

There are parallels with the Arthurian tradition of Excalibur and the Lady in the Lake but the Tiddy Mun seems older still.

Times change. One landscape replaces another. Old ways and fears are forgotten and the new agricultural system becomes king. Another skein heads east. The wind shakes electric lines. Black earth with memories. Away, towards Swineshead, I see hi-vis jackets stooping over cabbages.