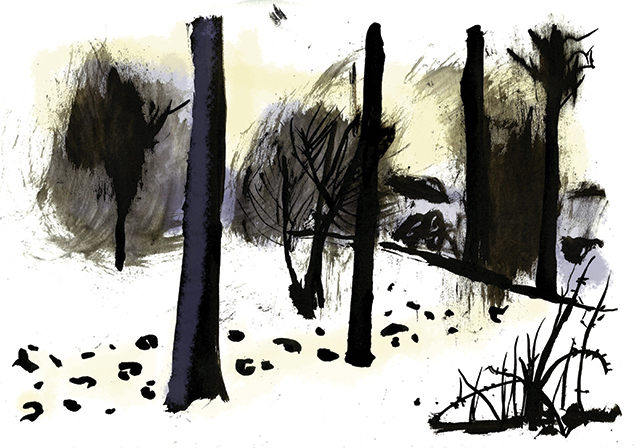 27th February – 2nd March: in ice and snow
Each morning was colder than the last. Gradually so. The older of my two dogs feels it more, carefully avoiding patches of frozen mud and iced puddles. That wind coming in straight from the North Sea. I bought a better coat, waxed with heavy zips – better to keep the cold out than my ancient herringbone.

I’d planned to get down to the south – a hillfort near Grantham, maybe camp out – but the snow came. Everyone said not to travel, so I pulled my boots on and let the weather guide me.

TUESDAY
The forecast for tomorrow is silly, the tabloids are calling it the Beast from the East. A heavy dusting overnight has been enough to make a difference, it makes a start anyway. Across the bypass and into the hills – beech hedges bare, hawthorn with road debris, all full of birds, robins and sparrows. Busy sounding, alert and darting about. I’ve been looking at those Dutch paintings, sixteenth-century stuff like Bruegel the Elder. He knew how to look at snow and cold – it’s the colour he paints the trees. That painting of his, The Return of the Hunters, that’s the one. For the last week or so, that’s been me and the dogs. Uphill the horizon divides into that which is visible and that which is unseen. A massive bank of weather along the coast – you can see it churning to earth, dirty white and whipping away to the heavens. The first lick of Arctic breath.

On a little further, to woods on my right. The wind drifts snow off the branches and a flurry has picked up. It is exactly like the start of the Raymond Briggs book, The Snowman – pencilled, muted; something unpinnably English in its winteriness like looking at a memory, albeit a cold and increasingly peckish memory.

I duck in the wood hoping for a sheltered spot and dive into my well-stocked lunchbox: ham, cheese and pickle – should have brought soup. The snow is thicker up here – a few inches. Amazing the difference a bit of elevation makes. Scouting about, there are tracks to follow. A wellied pair of boots and a bigger dog, not long ago, treads still fresh. Something else, a fox maybe, at the edge of the wood. I settle into a stump to watch. Half an hour passes. A few fields away, hay is being delivered to sheep. Without a sound – a barn owl glides from one end of the wood to another, on the hunt. Everything is still apart from the snow – a moment of sunlight and the sun is gone. Flurries turn to squall turn to blizzard. I watch until it eases, ten minutes maybe, and head back – no need to mess about with this kind of weather.

WEDNESDAY
The proper snow fell early – between 3am and 5am (very young babies and elderly dogs make short work of the night). Children waking early with the reflected light – suddenly dressed and ready for action. By 6am, me and the oldest are out with the dogs. First footprints. Good. Flakes like an explosion at the Smash factory – fine and powdery, ripe for drifting.

The dogs pull and skid. Walking on – up into the old railway cutting, sheltered from the wind by embankment and hawthorn. My telephone peeps: “No school today lads.” On a mile or so but no further. The bitterness of this east wind in our faces – even the dogs look outmatched. Come on, we’ll head back through Pigg’s Field and get coffee and eggs back at home. Through the gap in hawthorn into the medieval acre – ridges and furrows, something to do with the monastery.

Lighter now but still thick with snow falling. Directly above us, a tiny hint of blue sky and a heron above the cloud! Then a crow, a scream – a fight! Look: a crow fighting a heron above the snow. Buckling the dogs up as we reach the other side of the field we turn – weather going sideways now – and there, imperious in the murk, the heron, eyeing us as we retreat.

Later – brighter – the snowfall has moved west. Local radio reporting road closures – the Wolds are impassable. Word from a friend of mine: six-foot drifts on the Bluestone Heath Road. I check in with my elderly neighbour and take orders for bread, milk, chicken pies and potted beef. We head out, my sons and I, with two sledges, and make for Westgate Fields. It’s quite a scene. Seems like half the town is out for fun. Snowmen are being fashioned, toddlers whizz awkwardly downhill to a tumbling halt. Improvised gear, swimming goggles and mittens – everyone joining in, giving pushes where needed.

Having planned ahead I dish out hot chocolate into a dozen plastic beakers to my boys and their comrades. I have a very strong memory of the same scene in 1990. I was 7, the whole town out to sledge – the kind of postcard moment that occurs on Christmas cards. The strange thing is, for most of these children, it is their first genuine experience of a proper snowfall. Winters have become milder, wetter – days like this are rare, when the country grinds to a halt and everyone plays.

On the march home, we stop at the butcher for our neighbour’s items and pack everything we need onto one of the sledges. Returning, we salt the paths and clear steps. Looking again at that painting, The Return of the Hunters by Bruegel the Elder, I point things out to the 5 year old: “There we are with the dogs, and there again in the valley with bundles and shovels – there’s the birds we saw and there is the wood smoke rising from chimneys.” The colours are the same, the action is the same, the same kind of day, the thick end of 500 years ago.