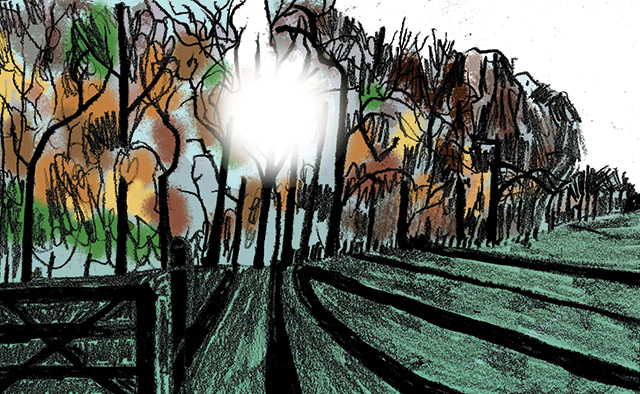 Having said cheerio to the butcher, my sons and I head through the west of Louth. We set a scampering pace down Crowtree Lane and I point out significant spots – “I met your Mum there” and “I was born in there” but the boys are more eager to swing into Westgate Fields on the five bar gate. We tumble along with a pit stop for them to climb a tree and eat a square or two of chocolate.

Autumn has lasted a long time this year, mid-November now and there are still leaves falling – the beeches are looking particularly good. My youngest son is 4 and wild with it – stuffing his pockets with oak sprigs and quickly fashions a javelin – the other two, 5 and 8, are keen to get on so the youngest goes on my shoulders and we wind our way towards Hubbard’s Hills. The little café is shut and there are no cars in the car park, frost yet to thaw. We head along the path behind the farm through two fields of sheep and follow the treeline.

This side of the Lud is Fisher’s Hill – who Fisher was is vague but the name is on the oldest Ordnance maps. Not many people come up into these woods, the occasional hardy dogwalker and adventurous children aside. There’s still a couple of fading DEFRA signs from the last Foot and Mouth outbreak tacked to the fence. Back in the 1920s an amateur archaeologist found loads of worked flint up here – Mesolithic stuff. I tell the boys about the deer and the mammoths, I tell them that those folk 10,000 years ago were just like you and I and how they probably lived up here to watch the beasts going through the valley. By the time I have finished my speech all the boys are now armed with sticks and are making inquiries into flint knapping.

I like places like this – unbound to a particular time, inbetween places. The bypass rumbles close by but out of sight. If you look carefully at the Louth Panorama by William Brown (1846) you can just make out a mound on this spot – I wouldn’t be surprised if there were prehistoric burials up here, there are plenty on the hills over the road. A short walk in that direction will lead you to Skeleton Hill – no small leap of the imagination to how it got its name.

We bundle up some logs – as many as we can carry – and make our way along the wooded ridge, low sun in our faces. A fair amount of dead standing has toppled recently – good material for our project. We carve a path through the bone dry leaves as we drag what we can to the den.

We started building the den last year and have been up most weekends since to add a branch or two. With such a quantity of windfall, we’ll be busy for hours. The bigger branches I tie together with some cord and the boys offer up anything they can lay their hands on. Before long the den has doubled in size – all three boys and me fit within. The original structure has been added to by strangers too. Boughs and twigs carefully piled, sometimes we find a node of flint left inside. Never any rubbish though. Teenagers used to come into these woods for parties and drinking – I don’t think they do now, there’s never any of the telltale debris. For years there was a well established fire pit up here – no trace left.

The boys charge about; one trips on a root, one skids down the chalk slope, one enquires about the sausages. Through the trees we see a familiar dog and call out to her and her owner – sticks are thrown.

Having stood about for ten minutes, all feel the cold. The last week or so, those first proper bites of winter have appeared – a certain crunch under foot, visible breath, a whisper of Christmas. There is also the excitement of another brother due any week now and the boys rattle off lists of names and questions as I prepare lunch.

I take a small stove, an iron skillet and a pound of the best sausages one can get locally – extra sage – and so unfolds an ageless scene. Three hungry little boys prod the bangers with pokey little sticks as I hold the pan handle and repeat the mantra “gently, not too close, steady.” The eldest breaks open the bread and the middle one is ready with tomato sauce. A few moments to let the sausages rest (a vital stage in sausage preparation) and steaming rolls are passed around.

Three boys sit on a log, a picture of contentment and ketchupy chops and I brew myself some tea. Bare trees reflected on hot water.

As they eat, I bend wood this way and that, weaving a frame out of the growing den. Talk turns to spending the night here sometime, maybe in the summer.

Lunch being dealt with, more wood is gathered and set. Over the hills shotguns pop and more than a few pheasants are sheltering in the scrub beyond us. Big startled wings, ruffled feathers. I set tasks for each child and an hour passes. We see dozens of rabbits, the hill is part warren – the boys’ noise must have struck alarm bells.

By two o’clock the sun is beginning to head west, that hazy light of a winter’s afternoon, pewter and auburn. The boys lead me down by the river to pick fat skimmers. We found a fossil here once – a calcified sea urchin – and ever since they’ve been looking for more. Stepping stones are stepped over and the river twinkles. It’ll be cold tonight. Time to head on lads.

There is a resounding cheer as they find the café has opened – even on a cold day the call of a raspberry ripple is hard to ignore. The café at Hubbard’s Hills hasn’t changed for decades – Brooke Bond stickers in the window, tea in Pyrex cups, those polystyrene gilders. Our wet boot prints on the concrete floor, the boys are soon excitedly telling the chap with the ice creams all about dens and mammoths and sausages in the woods.