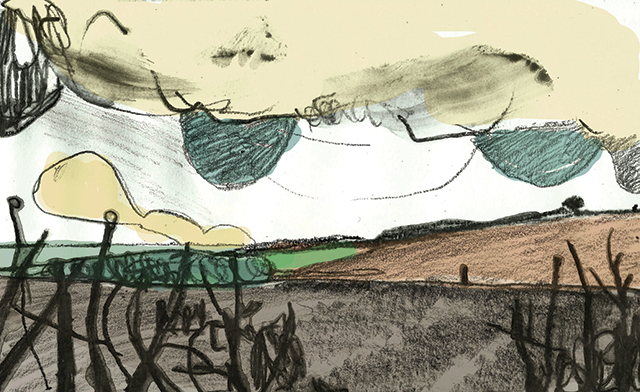 A New Year’s Eve walk sees Maxim Griffin following the path of the Meridian towards Tathwell and Bully Hill.
Sunday 31st December 2017 – thin light, wind from the south, brighter later. A spare day after a busy Christmas. A newborn son at home to add to our brood, guests expected later and another year to prepare for. I weigh up the choices and play a little game to aid decision making. Taking an old map, I divide the area in six. I roll two dice – one for distance (to be doubled) and one for direction. Twelve miles, south. Right. I grab my pack and fly out the door.

There’s a track across half the Wolds that roughly follows the path of the Meridian – if I walk far enough, quick enough, I can go over the hills in a straight line and back again before it gets dark. It suits today’s purpose nicely. After quickly checking Pevsner for relevant information I charge across Louth, uphill to Julian Bower to the point where the old track meets an even older path – some folks reckon this way is the remains of a pre-Roman high road. Good. Pre-Roman, I like that.

Between two electric fences downhill – I doubt my choice of footwear, as I skid towards the gap in the hawthorn. A flock of gulls bathe in the shallow of the next field. More mud uphill – an extra sole accumulates rapidly. Three more fields like this before I cross the A16 with a triumphant skip.

The earth is chalkier this side of the road, redder earth – ahead up Coxey Hill a little wood and the silhouette of 100 rooks against the sky. I scribble notes for a drawing and head on towards Tathwell. A robin tails my movements for a few minutes – darting across the path ahead of me and back again.

I look at the boot prints ahead of me. Not fresh. A few days old. Some lone walker on Christmas day perhaps. A hint of the midwinter melancholy of Raymond Briggs’ The Snowman. Scanning around over my territory I see familiar points, a valley I’ve slept in, trees I’ve lunched under, the Humber far off clear, windfarms, Doggerland, Skeg. It takes me a full day walking, 12 to 15 hours to reach less familiar land.

More rooks as I glide through mud to Tathwell, taking five minutes by a millennium marker stone to clear the worst off my boots. A curtain twitches at the house opposite.

I toss a coin to choose a detour and walk up the road towards Haugham. Walking along the tarmac of a country lane is rather pleasant. Bully Hill is up ahead.

The wind picks up and the seven barrows appear at the top of the ridge. There’s that bare branch howl and linger of bonfire in the air – I can hear the voices of two children and someone older. Light reflects from two scarecrows – dangling compact discs from the arms.

There’s no official access to the barrows so I stand by the hedge and think about the people within. Pre-Romans – surely, they would have walked the same tracks I do. It’s a strange place, Bully Hill. At the roadside is an old signpost decorated in old toys – a cat in a hat, a cow, a mushroom from Super Mario – the post itself is gallows shaped. An eerie scene, an active scene – the toys on the post change from time to time (a friend of mine saw an elderly gentleman doing it one dusk). A place that requires quiet rituals. A broken ornament of a cartoon owl watches from the ivy clad tip of the next fence post.

Walking on to Haugham, there’s another large barrow at the edge of a farmyard. A sign says the church is open – no time to stop today but All Saints is worth a look in if you are passing. A curious miniature of St James in Louth. It looks good in the trees as the light starts to change.

Up the road a house flies a red banner that says ‘Mammoth’. Good.

By a farmyard at the junction of the lane with the road to Tetford the sun comes out as if directed – grey and bleak turns to blue, bright. A high contrast few moments – unphotographable – I lean up by a telegraph pole and flip my collar up. Onwards between two fields, casting longer shadows as the sun begins to steadily dip.

The sky turns milky – the clouds are welling up again from the other side of the Wolds and settling between me and the sun like levelling stout. At the edge of the path between two fields, a trail camera fixed to a metal rod, pointing west – for the sunsets perhaps? Fixing my stare into the aperture, I blow a raspberry.

Back towards Tathwell, I have to stop and empty bits of pebble and flint from my boots. It’s only two o’clock but it’ll be dark soon enough – better get a shift on. Rather than track back across muddy fields again I split for the direction of the Hallington end of Hubbard’s Hills. I walk the road above the earthworks at Maltby – Templar land, a preceptory once stood here, back in the twelfth century, right on the spring from where the main body of the Lud wells up. They were hard lads, the Templars – I dare say that ones who lived here saw service in the Holy Land. I dread to think.

Beyond, over a wood called Wilderness, a parliament of rooks wheel and turn, scatter and reform. Standing, watching – timing the birds with my breath. They wheel left, I count to four, they wheel right, I count again, and they roost.

Back towards home over familiar paths, as I plough through Hubbard’s Hills I bump into friends and known faces, everyone wishing each other the best for the coming year. As I reach town I meet more friends. “Coming for a drink, Maxim?” I just smile and point at the state of my boots. Onwards, home to guests and children.