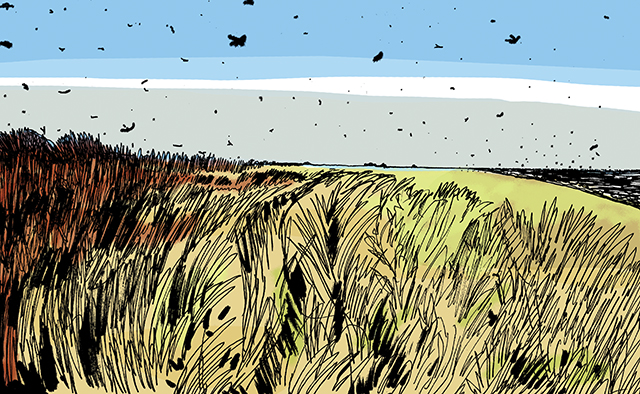 1st February 2019 – bright, blowy, penetrating, by Maxim Griffin.
The bus ride from Louth is twisty and weather battered – strong, low sun and high winds – seven quid return will get you to Mablethorpe, a couple more and you can be in Skegness in a little over an hour. It’s a good way to see things, from the top deck at the front – face first through overhanging trees and elevated over the bunkerish bungalows of the outmarsh villages.

Today, I’m with comrades. Mr Rowett is a sound artist and brewer of strong ales and Miss Farrell is a photographer of landscapes of the old school, a Soviet SLR slung about her neck like an assault rifle. We are on our way to make various recordings, to see what the territory presents us with and make something of it – a good way to spend a spare Monday.

The bus pulls in and the sharp sea air hits home. Collars go up and hats get pulled on. There’s a charity shop with wheelchairs and Zimmer frames stacked up outside.

Talking as we head down the high street, I relate my story of an encounter with The Chuckle Brothers on the seafront one night back in 2003 – they’d come to switch on the illuminations. There must have been ten thousand people out that night and the brothers had them in the palms of their hands – ‘To me, To you’ – call and response like a James Brown number. That night, my friends and I cornered them, them and the carnival queen, with the hope of receiving an audience and a handshake. Having a Chuckle lay their hands on you would be like the King’s Touch, we reasoned. That was a long time ago now though, and Barry is gone. Oh dear, oh dear.

Too early for anything to be open – we gaze at amusement reflections and fast food hoardings – a dead-eyed Tellytubby beyond dark windows. A city of gold with Neptune in fibreglass, eyes fixed beyond the east of England to the raw power of the sea in winter, sun flashing on his crown of plastic rubies.

Rowett tests sounds with a device that looks like a taser and Farrell photographs shutters and doorways.

Up the ramp to the sea – the sea is what it’s all about really – the meaning of this settlement – and my goodness, she is on form this day. Breakers and white horses blown and racing, reflecting, crushing, rising – to the south, such are the effects of the winter light that the sea appears a mirrored turmoil of energy. It is breathtaking and fierce. We cannot help but laugh in the elemental of it – in such a sight, one is lifted.

As waves break at the tide line, Dunlin skitter. Dunlin are small, quick birds, darting through the foam and scum – tremendous fun to look at – like tiny, happy dogs.

We head north. Past a row of razzle dazzle painted chalets with a crazy golf pirate ship perched on top, as if Fitzcarraldo himself had pulled it there himself – the torn banners of skulls and crossbones are straight black lines in the wind. Just beyond this, an unofficial memorial garden at the dune’s edge – salvaged toilets planted with hardy flowers and herbs, a small sign in remembrance of Grandpa Bob and a collage of plastered and cemented shells and driftwood. It is an excellent thing. A memorial made with real heart and love and joy – to whoever made it, I salute you.

Ahead – Mablethorpe behind us, picking occasional bits of interesting debris – fused oyster husks and razor clams – I pocket a crab claw for my sons. There are crows. Lots of crows. All the crows. On the beach and in the air. Coming out of the buckthorn, roosting on the highest spikes. We reel off the collective nouns: a murder, a horde, a wake – a wake of crows. Perhaps something washed up, another seal perhaps. I’ve never seen so many crows at once. I climb up the dune while Rowett and Farrell fix some tea – all I see is more crows.

The tea is good – milky and hot. Along the shoreline, a woman walks very slowly, pausing every few steps, deep in her combing – good, concentrated looking as a form of meditation.

We wander back to the promenade – all but one café is shut – sudden hunger – I could use a plate of breakfast. The sign offers good prices and the assured quality of Minton’s eggs. Minton. Haven’t heard from him in a while – last I heard he was fixing up ancient fairground organs. Rowett has another idea – we sit on the concrete steps as he pulls out a bigger stove – a meths driven job – weatherproof. Then he pulls out the makings of lunch – herbs and spice, diced onions and smashed garlic, tomatoes and beans and smoky sausages. This is impressive. The passing dog walkers think so too as the smell quickly cuts the air and a friendly terrier comes to see what she can snaffle. Lunch is serious business to Rowett. A squeezy flask of white wine is added to the pot and two types of bread are produced for the purposes of mopping juices.

Lunch done and now feeling a little over exposed to the wind, we head back to the bus with the sea still raging. From within an arcade, curiously, a Tom Waits song plays – appropriate – he’d like Mablethorpe.

On the bus back, a man from the villages tells me how every Monday he makes the trip to Skegness for KFC. His luggage confirms this. A cardboard bucket of mostly eaten chicken legs on his lap – he taps his nose – snuck it past the driver, he says. Good.

Still bright and blowy back at Louth bus station – colder though, bitter – forecasts are for snow soon, so, my comrades and I find a pub with a fire and settle into the rest of the afternoon in the comfort of flames and stout. Not bad for the first Monday in February.