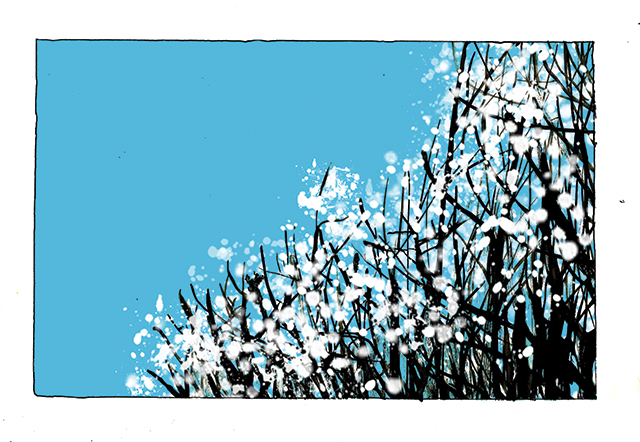 April to May 2019 – written on a wet morning, by Maxim Griffin.
The field has no name. It’s position and boundaries are marked on the oldest Ordnance Survey maps. An unofficial path has always cut through here – I see it marked on mottled paper – 1846. On three sides there are thick hedges of blackthorn, scrub and brambles to the northern edge. A dense tangle with some young birch trees popping up here and there.

The cadaver of some tin roofed shed being slowly pulled to ground by overwhelming vegetation.

A track leads to the road. A little debris in the cross hatched wire fence that borders a school sports field beyond. Those concrete posts, angled at the last foot, a clumsy attempt to maintain the perimeter against drifting dog walkers.

There’s a famous painting – a sort of Victorian topographical piece, that shows the breadth of the land from the Humber to the top of the Wolds and beyond – the field is quite clearly seen on it, if you know where to look.

There are traces and desire lines around the edge of the field – well-worn circuits – the signs of regular passage and consistent use. At three points in the surrounding hedgerows hollows big enough for a person to fit easily – where thicker limbs have been fixed aside while young and supple to create human sized arches that have grown into the structure of these boundaries.

The field itself is unremarkable enough – an acre or so of mixed grasses, a little ridge, a little furrow. It has not been worked for a very long time. During the summer the grass grows waist deep, with many wild flowers, ground nesting birds and other myriad beasts.

After a strangely mild end to the winter the blossom arrives early. On the last day of March there was a spectacular hoar frost – everything hung with ice. A warm, wet day followed. On the morning of All Fool’s every thorn had flowered into a great and sudden constellation of life.

The rains came and the blossom faded to be replaced by the ecstasy of green. That great rising of chlorophyll. A telegraph pole crooked midst Queen Anne’s lace and young nettles. Have you ever seen the film Stalker by Andrei Tarkovsky? If not, consider this recommendation as homework. In it, two men are led into the forbidden and mysterious Zone by a guide. That’s what the field looks like at this time of year – The Zone. Wet, overgrown, post-industrial. In the 1970s Richard Mabey wrote a great book on such places, The Unofficial Countryside.

On the second day of April I heard the first cuckoo – that full fat call like a child tooting on an ocarina. It was dawn – I always come through the field at dawn – routine and responsibilities demand it. Deep into the east, beyond the hedges and council houses – through the haar, sunrise as an angry blister spreading west on the veins of vapour trails that stitch Manchester to Dubai.

You can see a lot if you stop in the early hours – 5am, the burr and tick of the dawn chorus – in the long grass, a fox snuffling for slugs or some such – a pair of clicking magpies going from grass to edge, always the same spot – two wood pigeons always on the same branch – if I come through here early enough they are still asleep there. Where the grass is long and the young blackthorns are establishing a second wave of hedge, a billion clustered of ladybirds under very new leaves – big drips of dew yet to drop – if you look through them the world is turned upside down but the blister of the sun remains the same.

A heron dead centre in the acre, grey, imperious. The Humber gulls glide in on the first thermals of day – this is something of a rally point – hundreds come. I can see my own footprints from a previous morning and the soft spoor of a tabby that slivers into the ruins of the tin hut. The hunting is good there.

The hunting has always been good.

An older friend, now faded into his own history, told me about the field and how a flint arrow was found here years back, with the fragments of a mammoth bone – probably butchered on the spot.

A tempting suggestion, that maybe at the end of the last ice age or thereabouts, a gang of ancestors took down a great beast here – fashioned steaks and sausages out of mastodon gizzards on the receding tundra.

Days of heavy rain promote an index of grasses, a dictionary of weeds: Bindweed – Perennial Morning Glory – Lambsquarters – Pigweed (Amaranth) – Crabgrass – Quackgrass – Chickweed – Dandelion. There’s ivy towering through the telephone lines – green and drizzly murk – a sign: Danger of Death (a yellow triangle with the shadow of a man struck by black lightning).

Down the track – a robin, very delicately, on rising brambles – the sun breaks the borderline between the undercarriage of the weather and the top of the hedgerows – bright green against a swirling black sky – slate grey angles of rain, the refraction of light – up above the streets and houses, bent colour. Good.

This field has no name. It is an ordinary enough patch. That it has remined dormant and allowed the flora and fauna to flourish, quietly and largely out of sight is a good thing – an accidental experiment in nature. Later, another day, I receive word that it is to be developed. Executive houses, tarmac, ample parking, profit – quick research finds the plans – the hedges are to be removed and the beasts and birds expelled.

I moved the egg off the path – somewhere safe from rain and magpies.