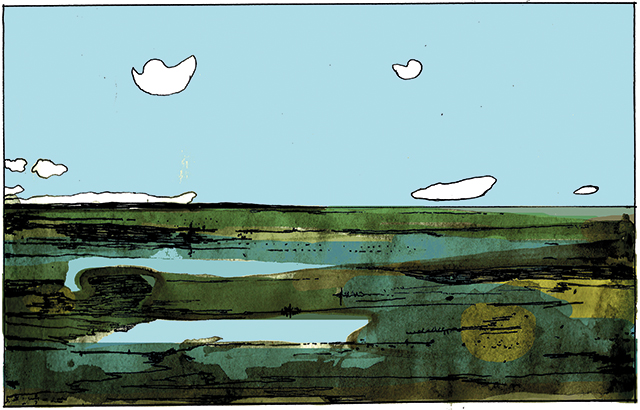 1st June 2019 – at the limits of Earth, at the extremity of Heaven, by Maxim Griffin.

Rain. I’d just got back in from the night’s work – the dogs were ready and the children needed a blast – just after 7am. By twenty past we are all in the car, my wife at the helm, four boys and two dogs – East. Eastern. Eastest.

A swift journey through the outmarsh and we pull up down the track by a pillbox and a bungalow called Sea Shadow – the day feels like it is going to be muzzy. It rained hard overnight, the sun sends the vapours up – the fields are steaming but we can look back west to the Wolds and see Stenigot mast through the haze.

Nobody else about. Good – down the track with my youngest on my back, smashing through puddles with wellingtons on. Through the buckthorn and the dunes to the beach. The tide has just gone out. A flat grey sky to the south, clear to the north – we’re right under the edge, a boundary of sorts – above us, the sky lines, jet trails divide the sky again in the stratosphere. I’ve an app on my telephone, a radar that identifies passing aircraft, tells you where they’ve been and where they are going. We look: Milan to Memphis, Frankfurt to Dallas, Doncaster to Gdansk – such places, such people passing.

We head on. Salt water remains where the sea just was. Tiny islands of samphire, tiny crabs waiting to be taken back – other than that – sheer flatness – we walk under the borderline of clouds, cirrocumulus, altostratus, cumulonimbus – dead grey to the south and even clearer to the north.

There is barely a division between land and sea – Everything merges, reflects, folds – we are walking through the mirror zone. Vertical symmetry. I was reading a memoir by the great Saul Steinberg. He made strange drawings of reflected landscapes (among many other works). There’s a nice line in his book about how water was man’s first mirror, “man saw himself against the sky and light. Since he couldn’t hang the water on the wall, he had to invent the mirror in order to look at himself.”

The boys charge ahead with the fastest of the dogs, making shapes with their opposites, joining arms and making themselves a circle with their mirror twins.

All about us, no boundaries – it’s very strange. Walking through a palindrome – Barnacle geese above and therefore also below – twenty I think, big and black and white – reflections pass between my feet – my youngest son, still on my back and on the threshold of speech – birds! Better than birds, John – geese. I think of the palindrome – Do geese see god? Ha, that’s good. My wife reminds me of another – Go hang a salami, I’m a lasagna hog – but it doesn’t fit nearly as well – Do geese see god? More sky lines – JFK to Doha – we talk word games as we near the tide line – at home I wrote mud in chalk on a wall – in the mirror opposite it reads bum.

At the border of the water and the sand there is no mirror – we’re under the cloud – what is that? There – something in the surf – a mirage? Wouldn’t be the first time I’ve been tricked by the light out here – a silver lump in the waves. What? Some ship junk? We’ll clean it up – we always do. Closer. Oh.

Olaf the Snowman from the Disney film Frozen.

His head full of helium still but the body weighed down by North Sea and slurry and a tangle of blue ribbon that spills from him like offal. Olaf’s offal.

Somewhere, a child held it – then let it go.

I pull out my knife – best remove the gas and bag him up with the dog poo.

I hold Olaf up.

The balloon is double-sided – two-faced – mirrored. Look. His eyes gaze inert, east and west. Do you know the two-faced god? The Romans called him Janus – the god of boundaries, thresholds, duality, beginnings and endings – his abode at the limits of Earth, at the extremity of Heaven, in mirrors.

Here – on this plateau of mirrors, Olaf the Janus totem – debris of the Anthropocene. Typical. I don’t make this stuff up.

I hold Olaf up – his face both to heaven and earth, at the edge of land and sea – his reflection and his shadow – a gurning mouth with gizzards the colour of a child’s drawing of the ocean and the sky.

My boys give judgement.

The knife goes clean through the silver – a gasp of helium goes up – a last breath – two faces curl and crinkle and shrivel into a wet grimace.

We do not let it go – I bag it up with the dog faeces.

We turn and head inland.

Back across the mirror zone. Boots over mud and puddle – the tide is turning with us – kittiwakes and other gulls over the water – another plane passes above on high – the tiny crabs will get their pick up and be carried back, no doubt to feed on some dead seal in the depths.

The breeze picks up, rippling the surface – lighting upwards to our faces and shimmering our shadows and reflections – the spell not broken, just moved on.

Tiredness hits – I’ve been awake for twenty-four hours and working for most of that. The boys need a bite to eat – we head back towards the Wolds, over the outmarsh, the mast at Stenigot gets larger as we near home.

In the kitchen – sausages and wet dogs – I say goodnight – my day is reversed, upside down, reflected.

Upstairs, I put on a DVD – something ambient to drift off too – the logo of the distribution company is the first title.