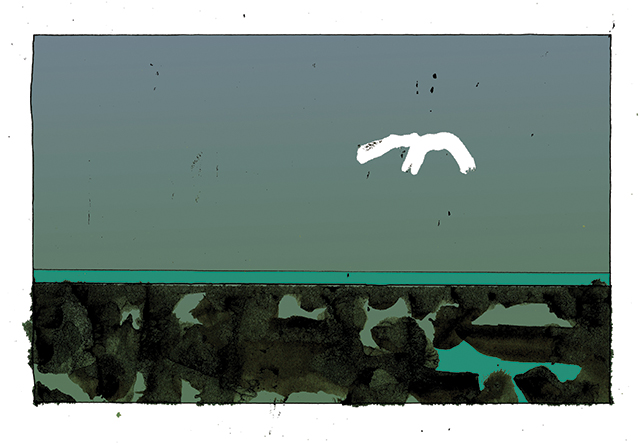 11.55am. Almost lunchtime. We’re at the pointy end of the summer holidays and have an appointment to keep – Cleethorpes bound.

There’s a lull in the heatwave. Earlier in the week record temperatures were recorded across the country. An ugly hotness. The North Sea brings a cool front and with it, the fog. So in the fog we roll along the seafront.

The haar is here – fog as a solid, seaborn mass – visibility is down to fifty metres or so. There’s folk about though, making the best of it. Buckets and spades – seaside enthusiasm. We roll with it. Up the beach from Humberston to Cleethorpes – my sons taking point in between the mud and the sand and along the tide line – figures half seen along the debris line. I look down to check my footing – razor clam shells, sea glass, oyster fragments, feathers – looking closer – other debris, I sieve the matter through my fingers – polystyrene, fibreglass, Coke bottle top. Is this a new foundation to the shoreline? There’s an epoch for it – the Anthropocene, the manmade geology – you see on the news, great atolls of plastic in the Pacific Ocean and whales that wash up in Norfolk, bellies full of blue rope and coffee cups. It’s here – below my boots and in my fist – the things we make that can’t erode but hide themselves within the billion grains of sand. There will be a debt to pay.

The fog gets thicker. I can just make out ships. Gulls wait at the edge of the water. A fellow with a metal detector sweeps the surface. Another man, head down but on a telephone – not a beachcomber – too urgent.

Approaching Cleethorpes proper. It’s a Sunday – the prom is full of drifting people – bikers, pulling up for chips. Donut smells. The fog mutes sound – it is strangely quiet – up a ways, five lowly donkeys are led with sleigh bells on their harnesses under the burden of five beaming children.

We’re to meet friends by the pier – our mutual offspring dash ahead and bound into the softer sand pitching into an abandoned foxhole with a foraged spade.

Leaning on the iron bars of the promenade edge, a hulk of a man pulls a single vast toke on a vaping stick and is lost for a moment in the swirl of raspberry scented clouds, only his ham-sized forearms visible in their tattoos of Celtic ribbons. He shifts weight, tokes again and vanishes in the fog.

The tide is still low enough for us to explore the superstructure below the pier. It’s different under there. Puddles of tiny crabs and the reflections of rivets and tarred wood. With the wall of fog only a few paces away it all feels very noir – above, a machine bleeps Harry Lime’s theme in approval. It gets better – through the fog I see the circumference of the turning Ferris wheel.

There is no colour to any of it.

My eldest son leads the construction of a lonely mountain of sand – other children pitch in, a communal effort is made and other parents gather and chat.

Gold is struck – a small hand holds up a bunch of keys – house, car – blue fob – oh – we’ll hang on to them and hand them in to somewhere close. The scene continues – the grown-ups have a whip round – I’ll fetch a quantity of chips.

Along the prom, all life is here. Pushchairs and the dying. The pull of the coast is always the same. A frame boards declare an evening of mediumship and supper. The occult and the seaside go hand in hand – visibility is way down now, the tide bringing the fog to land. Something papery flutters through the feet of a gull – a woman bends down – a gift from the gods – a twenty – she beams up, almost tearful. This treasure was needed.

You feeding an army?

No mate, just a division.

Back – wipe your hands lads – and great slippery fingers shovel hot potato and fat. Even John, the littlest of all, recognises the satisfaction of this bounty – nothing dropped, every last scrap gobbled home. Wipe your hands lads.

That fellow again. 20-ish, urgent, not beachcombing, under the pier now as the water rises. Something lost.

We are, apparently, life-savers – pass the favour on pal.

Water swelling under the iron of the pier – an eastern association of railway companies clubbed together to manifest it in the 1870s – they built folks a reason to ride to the end of the line – attractions, entertainments, dances – if you build it, they will come.

The fog swallows the beach now – I make a mental note, something about a season of ghosts – there’s still children playing on the waterline, but getting called in – the tide brings fresh debris in. Bottles and straws and feathers, something dead, black and ancient.

We can’t see the tops of the buildings now. Back down to where the car is parked, towards the relics of Pleasure Island. I knew it had closed but didn’t realise the buildings were so intact – the faux battlements of Spanish City, crumbling, overgrown beyond the wire. I only went once as a kid and the rollercoaster made me sick. There are gaps in the fence, forced passages by urchin stalkers – I’d imagine it’s all been stripped of fittings now, all the cable torn for scrap. My older sons are keen – this looks forbidden and compelling – a risky combination – not today boys.

We pile back in the car, emptying boots of sand and water – the vacuum of inner welly muck sucking at small socks.