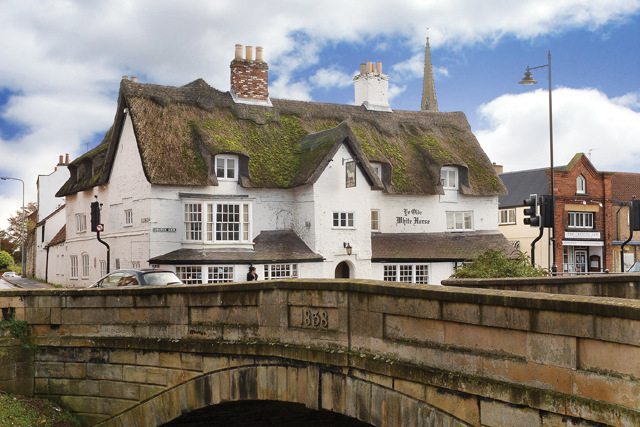 With its hidden alleyways, lively market place and mix of independent and national retailers, Spalding is well worth taking time to explore and not just during the festive season.
The exciting build-up to 25th December is well underway, against a backdrop of initiatives designed to make Spalding a place which is both attractive and safe to visit.

There’s lots of festive fun to enjoy, from shopping for that unique gift to eating out. Families are also being encouraged to take in this year’s pantomime, Snow White and the Seven Dwarfs – being staged at the South Holland Centre from 12th December to 2nd January (matinee and evening performances).
In addition, Spalding & District Chamber is working hard to help businesses to network more effectively and become increasingly successful in giving customers what they want.

Boston College’s team at the Red Lion Quarter is also helping to put the polish on today’s workers and the employees of tomorrow and adding to the mix of services available in the town at the same time.

And plans are underway to ensure that there is a ‘replacement’ event for the traditional crowdpulling Spalding Flower Festival (which ended this year), for locals and visitors to enjoy in 2014.

As we went to press plans were well underway for the switching on of the festive lights on 17th November – an event which typically draws a 5,000-strong crowd – and now everyone is looking ahead to the much-loved Traders’ Christmas Market on 7th December.

Spalding certainly has more sparkle this year and it’s not all down to the tantalising displays in the town centre’s shop windows or those at the Springfields Shopping Centre on its outskirts. In 2012 Spalding & District Chamber invested £70,000 in new LED lighting and this year there are extra lights in New Road and more in the Market Place. It is hoped to extend the lighting scheme further to take in Winsover Road next year.

Tulip Radio, which organised the light’s switch-on, with support from the Chamber and South Holland District Council, was anticipating a great night.

“The Traders’ Christmas Market on 7th December is next. It is South Holland District Council’s event, supported by ourselves and Spalding Chamber. All the stalls are fully booked and people will be getting dressed up and shoppers will be able to buy everything from food to clothing, crafts and gifts,” said Jan.

People are being encouraged to shop locally this Christmas and there are plenty of independent businesses, such as Hills Department Store and Bookmark – where you might catch a visiting author, as well as find an unusual gift – to tempt you.

“I think Spalding is definitely picking up, despite there still being some empty shops. We have recently had new arrivals, including Costa Coffee in the Market Place and Iceland in Holland Market and they are doing well.”

Jan added that Tulip Radio is working hard to support the community and help traders, particularly during the festive season.

Spalding and District Chamber president, Phil Scarlett said efforts have been made to ensure that shoppers and visitors can relax and enjoy a great experience, whether they visit Spalding in the daytime or in the evening.

“For instance, the Chamber runs the town’s Shopwatch Scheme and we have seen a rise in membership, not only of businesses in Spalding itself, but also within the surrounding area.

“It is great that the operations room is adjacent to the CCTV monitors in the police station in New Road.”

“The fact that the Shopwatch Scheme has grown and we also have Stuart on board is particularly good news with Christmas looming,” said Mr Scarlett.

The town is also poised to benefit from the visible presence of street pastors, who will be out and about on Friday and Saturday nights in the run-up to Christmas – and hopefully beyond.

“We brought interested stakeholders together and talked about having a similar event at a slightly different time of the year in 2014 and we invited volunteers to help to organise it,” said Phil.

“Following on from that, it has been decided to stage a Community Parade on 3rd May, which will predominantly consist of a walking parade involving schools and community groups.

“Local MP John Hayes, who was passionate about the Spalding Flower Festival, has committed to help raise £50,000 over the next five years to ensure that this parade will continue.

“It is vital to make sure that the parade is sustainable for the future so we are also looking to organise fundraising events, such as a Food and Beer Festival later in 2014, to help raise money for this,” said Phil.

Mr Scarlett also believes that the parade could play an important role in bringing the town centre and Springfields complex “closer together.”

SPALDING OPTOMETRIST NOMINATED FOR NATIONAL AWARD
Andy Molsom, of Molsom Optometrists, is in the running for the ‘Optometrist of the Year’ award as part of the Macular Society’s Awards for Excellence. The nomination recognises his exceptionally good practice in the care of people with macular degeneration.

In nominations for Mr Molsom he is described as efficient, welcoming, approachable and supportive.

Mr Molsom said: “It’s a great honour that a patient has thought me worthy for this award. As independent practices we always do our very best for all our patients, irrespective of the health of their eyes. People with sight problems, however, need extra care and time to counsel them appropriately. Without an excellent team of staff behind me, we couldn’t deliver the exceptional service we strive for. Our clinical services are our main focus, indeed a recent independent survey showed that 99% of our patients rate our service as either good or excellent.

“I just want to thank my patients and my staff, especially my sister who manages and is a co-director of the Donington practice, for their commitment over the years. It is a great privilege to serve local people; improving their eyesight so that they can enjoy life to the full. None of this would be possible without the great team that I work with.

Helen Jackman, chief executive of the Macular Society, said: “It is clear from his nomination that Andy Molsom works hard to improve the lives of people affected by macular degeneration, with excellence in advice and information. We are extremely grateful for his efforts in Spalding.”

GRANTS FOR GROWTH
Businesses in the Spalding area are being encouraged to give themselves a helping hand by applying for cash from a special grants scheme.

This innovative package of grant-based support for small to medium sized enterprises, concentrates on capital grants designed to help firms to buy and install efficient new systems and revenue grants to help businesses to promote low carbon and environmental goods and services.

RED LION QUARTER
Boston College has seen a rise in the number of students signing up to its courses over the past few months and there has been an increase in the wider use of the facilities offered at the town’s Red Lion Quarter complex.

Learners, working with staff, also kept its hair and beauty training salon, Style Academy, open throughout the summer and this was well received locally.

The College said its Spalding campus is attracting students from across South Lincolnshire and its current learners are delighted that they area able to study locally, rather than have to travel to Boston, Stamford or Peterborough.

“Spalding was in need of Further Education provision and the College has provided many people with the opportunity to study locally within the town. It also holds open events throughout the year, which continue to increase interest across the whole curriculum,” said the spokeswoman.

The fully-equipped, modern hair and beauty training salon is open to the public and courses are available to school leavers and adult learners, ranging from levels one to three, including apprenticeships.

The Sage Coffee Shop, which opened in summer 2013, offers freshly brewed coffee and homemade cakes and pastries and there are plans to offer a light lunch menu in the New Year.

The venue, which now has free wi-fi for customers and college learners and businesses, is also available for private hire. Sage is already being used as a hub for local community groups and people are encouraged to use the facilities.

From the New Year, the College will be starting new community courses, such as bakery and barista training.

The Red Lion Quarter is also home to five businesses which occupy eight rooms across its top floor. They are involved in activities ranging from the importation of vegetables and meat to the online sale of electrical equipment. All three retail units on the ground floor are also occupied.