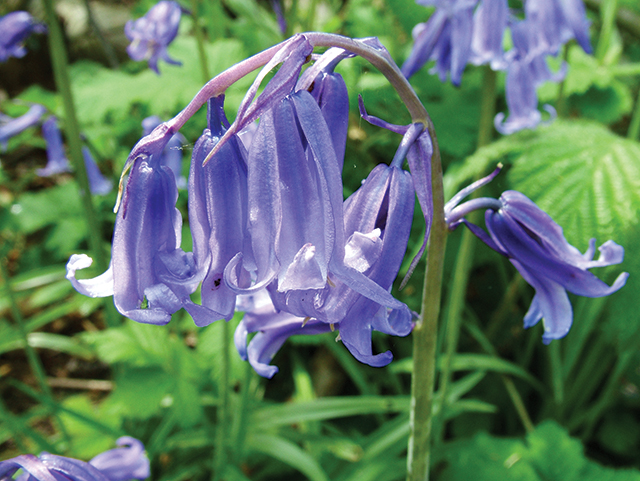 Rosey Norton takes us on a trip to Potterhanworth and its bluebell woods.
Potterhanworth is a small, pretty village a few miles from Lincoln. It is home to less than one thousand people and is made up of old stone houses, farms, fields and a beautiful ancient woodland that leads down to the dykes, which are home to many species of dragonfly. The fenland is now farmed and was once part of the Witham Abbeys.

One thing you can’t miss if you visit, or indeed drive through, is the huge red-brick building in the middle of the village. It is in fact a water tower and does seem to tower over everything, as it is one of the largest structures in the village. It was built around 1910 and has now been converted into a private dwelling.

Although services are few in Potterhanworth, it is also peaceful and low in traffic, making a pleasant place to visit in spring, especially between April and June when the bluebells carpet the ancient woodland and their scent drifts over the quiet lane the woods envelop.

The story of Potterhanworth goes back to at least the Roman times. However, Potterhanworth’s history, as the name suggests, is that of pottery. This was mainly during the medieval period. Potterhanworth’s identity really got started in the 1300s, although it is believed there was a Roman pottery kiln here. There’s evidence of Roman life in the form of scattered Roman pottery, a piece of Roman figurine and a hoard of fifty-seven Roman coins found ranging in date from Domitian to Constantine II circa

Most of the early history is medieval though and shows itself in the form of earthworks. The most important amongst these are garden terraces, a possible tree avenue, a common ridge and furrow, plus of course excavated evidence of pottery kilns. More recent history is responsible for the World War Two decoys, intended to confuse enemy planes away from the more strategically important Waddington airfield.

As with most older Lincolnshire villages, the church of St Andrew holds court in the village. The church itself has been there since the fourteenth century but fell into a ruinous state before being rebuilt in 1749, when only the tower was saved. It then fell again into disrepair when it didn’t have a residing priest, but was repaired in 1847-1852 when a new curate came to the parish and in addition to rebuilding the church and congregation, established a school in Potterhanworth. The church is now also home to the Bluebells community café, which during the bluebell season serves afternoon teas to refresh the traveller after a long walk in the woods. Since the closure of the village public houses, this is the main place to sit and enjoy refreshments. The café is run by volunteers and the proceeds go to chosen charities for the year.

Walking or driving down from the centre of the village, past the village primary school is Potterhanworth Wood, which is adjacent to the now drained fenland of the Witham Valley. The dominant tree is the now rare and nationally important, small-leaved lime (Tilia cordata); in places the wood consists of groups of this species, but elsewhere a variety of other common trees occur. Historically, the site is known to have been continuously wooded and it has a long history of management using coppicing for fires, house building etc. The spruce also dominates parts of the woodland.

The wild service tree (Sorbus torminalis) is found in the wood. The ground flora contains a large number of ancient woodland indicator species (an ancient woodland is one which has existed for more than 400 years). One of those is the native bluebell. Lesser Celandine is another, although can quickly be established in most places.

Maps of Potterhanworth during the eighteenth century show that the modern Potterhanworth Wood was then much larger, consisting of the Norman Hagg Wood in the south, Great Wood in the middle, and Queen (or ‘Quern’) Dike Wood in the north. The poplar lutestring moth has also been spotted in these woods. The native bluebell (Hyacinthus non-scriptus) growing prolifically in Potterhanworth Woods is a bulbous plant, with highly scented bell-shaped rich violet-blue flowers. The bluebells herald late spring to the village during late April, May and early June, at their most resplendent during May. Bluebell bulbs have a clever method of protection from bad weather during the winter months as their roots contract, which in turn pulls the bulb deeper into the ground.

Bluebell folklore is for a small and pretty flower quite gloomy. Historically, bluebell woods are home to fairies and as folklore would have it, if a bluebell rings, it is to call all of the fairies to a gathering. However, if a human hears the bell, they will suffer at the hands of a malicious fairy. Bluebell woods are considered enchanted and fairies will lure the unsuspecting human into a trap to be forever in the netherworld. Some good may come of a bluebell encounter. If you can turn the bell inside out without tearing it, then you will win the one you love.

Tours of bluebell woods have become very important to local rural economies and are, with the erosion of their habitat and the introduction of the garden Spanish hybrid bluebells, becoming rarer. Occasionally an English bluebell will have pink or white flowers but usually they are hybrids. Lincolnshire being quite sparsely wooded makes bluebell woods even more of a treat. The Spanish bluebell is a real threat to the native bluebell because they readily hybridise with our smaller, more highly scented native species and we risk losing our little gem forever.

For more information about Bluebells Café opening times please call 07984 110210 or find them on Facebook.

OTHER PLACES IN LINCOLNSHIRE TO SEE BLUEBELLS