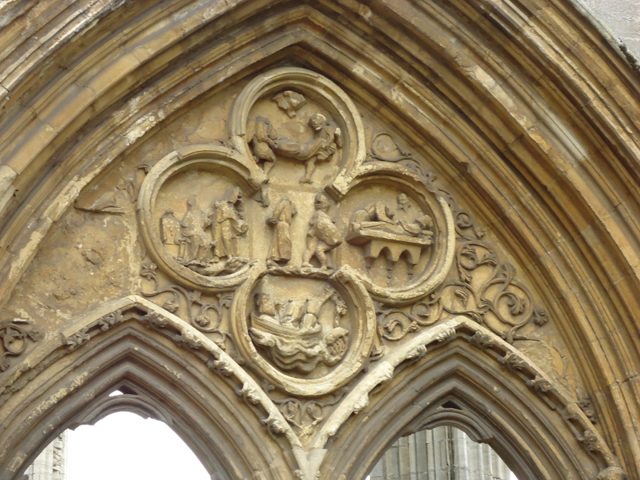 Drive to Crowland Abbey along the lonely fen roads on a misty December afternoon as the dusk is falling and you feel as though you are driving into the past, when the world seemed to consist only of water and sky; where small, isolated communities clung to muddy islands that raised themselves a few feet out of the undrained fens.
This was the world to which the former soldier Guthlac came in 699 AD, to one of the little islands – Crowland – where he would live and die, and where a great abbey would be built in his memory.

Guthlac was originally a Saxon nobleman turned soldier, who by the age of twenty-four had tired of bloodshed and entered the abbey of Repton in Derbyshire. But after two years he decided he wanted a more secluded life and headed towards the Lincolnshire fens. At Thorney Abbey he heard of an isolated island out in the fen and against advice persuaded one of the lay brothers, Tatwin, to take him there by boat. They arrived on what become Croyland –then meaning ‘crude and muddy land’ on St Bartholomew’s Day, 24th August. Edward Storey, in his ‘Portrait of the Fen Country’, describes how it might have looked:

‘The hot summer has made the now stagnant waters between Crowland and Thorney rank with decaying vegetation. Swarms of mosquitoes hum in a dense and frenzied cloud over the reeds, moving backwards and forwards, up and down, like the uncertain curtain of smoke from a smouldering fire. Eels glide, fat and slippery, under the green slime. The people who inhabit the island are reputed to be sullen and unfriendly.’

It was here that Guthlac decided to stay, spending his days in prayer and contemplation. He had wanted seclusion, but maybe he even had misgivings. The local people were unwelcoming and hostile, the low-lying island was unhealthy and plagued with mosquitoes and Guthlac fell ill with fevers and chills. At his lowest point he felt he was under attack from demons and legend has it that he sought the help of St Bartholomew, who gave Guthlac a three-thonged whip to ward them off.

Perhaps it was the way that Guthlac refused to be overcome by his difficulties that gradually won over the locals; gradually they came to accept him and sought his advice. Eventually he became respected as their resident ‘holy man’ whom people travelled some distance to consult. One of these was Ethelbald, in exile from his cousin Coelred, then king of Mercia. Guthlac prophesied that Ethelbald would himself become king, and Ethelbald promised that, if this were true, he would build a monastery on the site where he had spoken with Guthlac. In 714 Guthlac died and in 716 Ethelbald became king. He laid the foundation stone of what would become Crowland Abbey on St Bartholomew’s Day that year.

The first abbey was built of wood, reeds and straw of which there is no trace, though some of the oak piles, driven into the marshy ground to firm up the foundations, have survived. Because of its weak building material and its vulnerable position in the fens, the abbey was from the first prey to attack from the Danes, who easily navigated the Fens in search of anything valuable they could take. In 870, the Danes mounted a particularly savage attack, though it could be said that the monks had brought it on themselves. On Christmas Eve in 869 the monks were celebrating with some boisterous celebrations that bordered on the blasphemous. The abbot, Theodore, unsuccessfully tried to stop them and retired to his own rooms. As the partying continued a clap of thunder shook the building and the devil appeared in a cloud of sulphur. He told them that God had cursed them for their behaviour, and that within twelve months the abbey would be razed to the ground.

Cursed or not, the threat became reality in July the following the year. The Danes attacked and plundered the abbey, most of the monks were murdered and Abbot Theodore was killed as he prayed at the altar. A skull found many years later of a man struck from behind and through the eye socket was thought to be his; it was stolen from the present abbey church during the 1980s. The Danes took with them Guthlac’s Psalter, as well as the abbey charters, which were lost when they crossed the River Nene on their way to inflict similar damage on the monastery at Peterborough, then known as Medehamstede.

In 946 the ‘abbey’, which by now housed only three aged monks, was visited by King Eldred’s chancellor, Turketyl. Impressed by their hospitality and holiness he decided to become a monk and joined their community. When he was later appointed abbot he began a major building and restoration project; he was a wealthy man and brought both land and money to the abbey. It was during this period that Crowland became a Benedictine monastery. The Benedictines were one of the largest and most influential of the monastic orders in Britain at this time. Close to Crowland, Ely and Peterborough were both Benedictine foundations and the rebuilding at Crowland was part of a general monastic revival in which the Benedictines played a major part.

Turketyl’s abbey was destroyed by fire in 1061, when a plumber left his fire banked down with ashes. A strong wind caught the embers and soon the whole abbey was ablaze; the church and monastic buildings were destroyed and the library, containing the abbey charters and valuable manuscripts, was also lost. Once again rebuilding was needed, which continued through the next decades. In 1109 Joffrid of Orleans became abbot. He was keen to expand Crowland’s influence and sent monks to Cambridge to give lectures to the students. Following his example more than 300 years later, the then abbot, Lytlington of Crowland, established a hostel for novice Benedictine monks, which later became Magdalene College.

In the mid-1400s the quatrefoil, over what was then the abbey church’s west door, was sculpted. It can still be seen today and shows scenes from Guthlac’s life: his arrival at Crowland by boat; a band of devils trying to carry him off to hell but being turned back by his patron St Bartholomew; Guthlac getting rid of the demons with his three-thonged whip; Guthlac healing a Saxon nobleman; and prophesying to Ethelbald.

By the Middle Ages the monasteries had lost much of their early zeal. They became powerful and wealthy, and the once-strict Rules by which the monks lived became increasingly lax. Crowland was no exception to this trend. The abbey owned land in six counties, part shares in churches’ tithes, in mills, fisheries and woodland, and it took rent from land which it allowed tenants to farm. As a result the abbey was often involved in legal and financial wrangles about land. Pilgrims flocked to the shrine of St Guthlac, over the high altar of the abbey church. It was richly ornamented with marble, precious metals and jewels, and miracles were said to have taken place in front of it.

When Henry VIII began to turn his eyes towards the wealth of the monasteries there were over 800 religious houses in England and Wales; by 1540 there were none. Monastery buildings and properties were taken over by the Crown, and leased or sold to new occupiers. Crowland was surrendered to the king’s representatives on 4th December 1539, handing over revenues of £1,217 6s 8d. The choir, transepts central tower and the monastic buildings were all demolished; the nave and two aisles remained as the parish church. Gradually the nave and south aisle fell into disrepair and were removed; the remaining aisle now serves as the abbey church – it is one eighth of the size of the abbey which existed before 1539.

Guthlac had come to Crowland seeking solitude and silence in which to pray and meditate in a remote, watery world. The short spire of Crowland Abbey, visible today above the flat landscape, stands as his legacy.