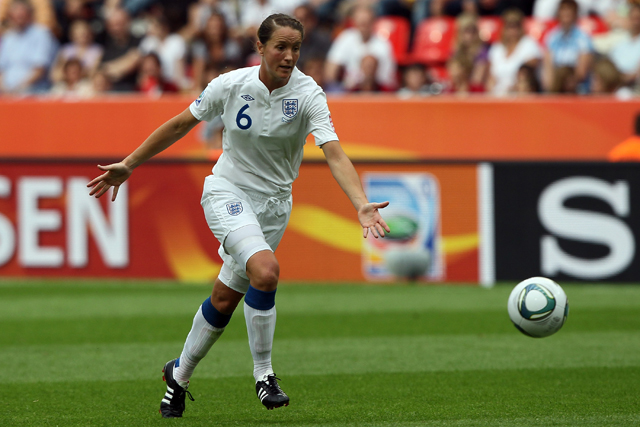 Striking a goal for the girls

For too long ‘the global game’ has excluded fifty per cent of the world’s population. Now, as part of the greatest show on earth, women’s football can introduce itself in fine style by setting the standard for London 2012.
Team GB will finally be able to count two football teams within its ranks, and the ladies squad will have the honour of opening the entire Olympic Games, at Cardiff’s Millennium Stadium, on 25th July.

Lincoln Ladies defender and club captain, Casey Stoney, one of only five English women to win over 100 international caps, should be a key member of Hope Powell’s team this summer, and appreciates the magnitude of what they could achieve.

“It’s absolutely huge,” she said. “For women’s football, and women’s sport in general, it’s massive. I’m sure the players are really excited. It’s a fantastic opportunity to springboard women’s football and give it a platform.

“We’ve taken steps in the right direction, but there’s never enough. Women’s football always gets interest around the major tournaments, but we have to try to continue that after the tournament is over.”

Stoney’s strength and versatility have made her a mainstay of an England team which reached the European Championship Final in 2009 and two World Cup Quarter-Finals, in 2007 and 2011. “Women’s sport in general gets just two per cent of any media coverage, and a tiny part of that is focused on women’s football, so the Olympics is huge. Hopefully it will encourage more young girls to play, and give girls role models as well,” she said.

Such role models were conspicuous by their absence from Stoney’s own childhood, as she began her career by earning grudging acceptance from a succession of boys’ teams, only to be told at the age of 11 that she couldn’t continue.

“Did I ever dream of playing for England when I was younger? No, because I didn’t even know there was an England side to play for. That was the lack of coverage that women’s football got then. I never saw any women’s football on the television. All I knew was that I wanted to play, because I loved the game,” said Stoney.

“It wasn’t until I was about fifteen that I got put forward for trials and thought, ‘I like this, this is what I want to do’ and it went from there. The opportunities for young girls now are so much greater. It’s fantastic that the FA has put so much in place for young girls who play football. It’s important that they have something to dream of and strive towards. It’s not easier (to succeed), but there is a direct path now.”

The Olympic tournament draw – which placed Team GB alongside New Zealand, Cameroon and Brazil in a group which Stoney thinks “could have been a lot worse” – only intensified the anticipation. Yet she is not taking anything for granted. “The excitement of watching the draw just made me want to get out there and work even harder,” she said.

“My first aim is to get in the squad. I’m never confident when it comes to squad selection, because you just never know, and there have always been surprises. I won’t get excited until I’ve got that letter saying I’m in. Until then all I can do is keep myself fit, train hard and make sure I’m performing in my Super League games.”

Still only thirty, yet with thirteen years’ experience at three luminaries of the women’s game – Arsenal, Charlton and Chelsea – Stoney’s glowing analysis of the Lincoln Ladies set-up is only enhanced when placed in such exalted company.

She said: “It is as close to professional as I’ve ever been as a player. We train up to six times a week, and that’s what it’s all about. It’s a fantastic club, they do great work in the community. Before I came to Lincoln I didn’t even know where it was on the map and I’ve now bought a house here. It’s a great place.”

Fourth place in the inaugural season of the FA Women’s Super League provided a fine platform on which to build, with a top two position, and qualification for the Women’s Champions League, the aim for 2012.

“That is the target for us, without a shadow of a doubt,” said Stoney, “and if we play to our potential, and play consistently well, then we’ve got good enough players to do it. Success in Europe would take the club to a whole new level and put it on the map, which is what we want to do.”

She is similarly complimentary about the domestic game, describing the Super League, in just its second year, as “the most competitive league I’ve ever played in. I’m tested every week, and to have to be on your game, every game, can only improve the England set-up.

“Playing in the summer is good, because you’re not competing with the men’s game as much. Attendances have gone up massively already, but if we can tap into the Olympic audience as well, hopefully we’ll get more people coming through the gates. We’ve now just got to keep on growing.”

The players have their own responsibility in achieving that collective aim, and Stoney looks to set a fine professional example. “I’ve always lived by that rule, of wanting to work harder every day. It is how much you want something and how much you’re willing to go out and work hard for it. I’m never ever satisfied with any of my performances,” she said.

“I’m proud to be over the 100 caps, but at the same time that doesn’t mean anything in football. Whether you’ve got fifty caps, 100 caps, whatever, you’ve got to earn the right to play.”

Unlike their male counterparts, many of whom seem reluctant to get involved both on the pitch and in the boardroom, the women’s team consider the Olympic Games to be the potential pinnacle of their careers.

“It’s definitely on a level with the World Cup,” she said. “You never know what could be created off the back of this. It will be a great platform, a worldwide platform, which will hopefully engage many countries. I don’t think any player in their right mind, whether they’re Welsh, Scottish, Northern Irish or English, would want to miss out on an opportunity like this.”

And the chances of Team GB success on home soil? “You’ve to set your sights high and believe that you can medal. I think if we play anywhere near our capabilities, then why not? A fit GB team will hopefully enjoy success,” said Stoney.

With an Olympic medal, WSL success and a European Championship qualification all on the agenda for the next six months, Stoney will combine her innate footballing intelligence with a healthy dose of adrenaline to compete on all three fronts.

She said: “This is what you dream of and what you play for. There’s so much excitement in women’s football and I want to play as long as I can. You’re a long time retired, and I love the game. It’s great to have done what I’ve done in the past, but I still won’t feel like I’ve achieved what I want to achieve until I’ve got a gold medal around my neck.”