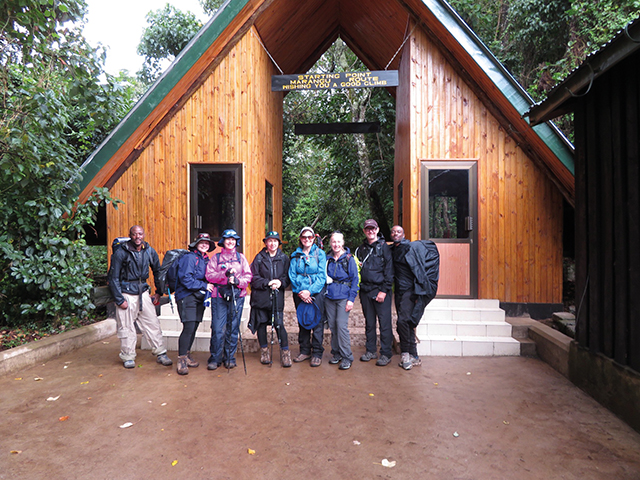 Four friends who met at the school gates have undertaken a once in a lifetime adventure, scaling Africa’s tallest mountain. They tell Kate Chapman about the challenges and rewards of their climb.
Super mums Elke Biehler-Birch (45) of Weston, Marney Chestnutt (59) of Spalding, Julie Gray (53) of Pinchbeck, and Helen Sibson (49) of Stamford, took on the epic challenge in February after pledging to climb Mount Kilimanjaro together at a festive party at the end of 2017.

At 5,895m, it is the tallest freestanding mountain in the world; it took the group five days to reach its summit, during which time they had to endure temperatures ranging from 25 to -15 degrees Celsius as well as horrendous side effects including violent sickness, headaches and hallucinations brought on by the dramatic change in altitude. While their final assault on the summit was undertaken at night in sub-zero temperatures.

“I struggled, I was really poorly,” said Julie, a breast cancer care nurse at Peterborough City Hospital, “my oxygen levels dropped quite dramatically and there were times where I honestly didn’t think I was going to get to the top.

“I just had to keep telling myself to put one foot in front of the other – I was doing it for my cancer ladies. If they can go through chemotherapy and feel terrible, then I thought at least I could climb a mountain.

“I cried when I got to the top; it was just so overwhelming. It was amazing and despite everything, I’d definitely do it again.”

The challenge came about after Marney, who has always been a keen climber and walker, told her friends she was planning to take on Kilimanjaro alone. Horrified to hear she was going by herself, Helen and Julie immediately vowed to accompany her – even though they had barely done any climbing before.

Elke, who manages the Baytree Coffee Lounge, took a little more persuading, but after initially saying no, she changed her mind when she realised it was an invitation she was never likely to receive again.

Between them they thought it would be a wonderful way to challenge themselves, keep fit and active, celebrate milestone birthdays and raise money for charity.

In order to prepare they walked regularly together and climbed UK peaks including Kinder Scout in the Peak District, Scafell Pike in the Lake District, Scotland’s Ben Nevis, Mount Snowdon in Wales, as well as Mount Teide, a volcano in Tenerife.

They self-funded their trip through Africa Safari, which provided guides to take them up the mountain, set up their camps and cook for them, while their first couple of days in Africa were spent acclimatising.

Elke said they were well looked after during their time away, which coincided with that of the celebrities climbing Kilimanjaro for Comic Relief.

“The guides were brilliant. They made sure we were up each morning at 6am for breakfast and ready to start walking a couple of hours later,” she said.

“We’d walk about 10k each day for the first four days, and got into the next camp at around 2pm. The tents were already up for us, so we’d just spend the rest of the time acclimatising and just resting.

“We’d go for another short walk later on and then come back down to help us cope with the change in altitude. I suffered terribly with headaches and hallucinations the higher we got and there were times when I could have easily given up.

“Because of the altitude our pace was very slow and steady. One thing that stands out is during the final climb I can just remember seeing more head torches ahead of us, they looked really high up and when I asked how much longer we had to go, I was told at least another 90 minutes. That part of the climb was horrendous.

“But for me, the worst thing was the constant need to go to the toilet – you have to stay hydrated and drink around six litres of water a day, which of course means you spend all night needing the toilet!

“Although it was hard, I loved being in a tent and at one with nature for a week. It’s got to be one of the best experiences of my life.”

Marney, the most experienced climber of the group, found the journey tough too and she also suffered at the hands of altitude, which due to the lack of oxygen made her feel as though she continually wanted to sleep.

“Physically I felt okay, but when the air started to get thinner, I just wanted to go to sleep – in fact I’ve never wanted to sleep so much in my life!” she said. “But this is something I have wanted to do for years, and even though it was horrendously tough, I’m so pleased I have done it – it’s certainly not put me off climbing.”

Helen, who admits she found it hard going too, said it was great to embark on such a challenge with her friends, with the time away only cementing their friendship bonds further.

“It was amazing; especially to see how the people there live and how they have to work. They were so lovely, kind and happy, yet they have so little. It really made me think about all the things we take for granted,” she added.

“Unlike the others though, although it was a wonderful experience, I wouldn’t want to do it again!”

Although they weren’t officially fundraising, Elke has raised £2,600 for Versus Arthritis, Julie collected £2,000 for the unit where she works and Marney raised £700 for Water Aid.

Rather than rest, the group is now planning another adventure. Their next climb will be Toubkal – North Africa’s highest mountain, in Morocco, which stands 4,176m high – in October.

“Climbing is a hobby which helps you keep fit and it takes you to some lovely places, it’s really beautiful when you reach the top of the mountains especially in areas like the Peak District and Lake District,” said Marney.

“I can’t play hockey anymore, so for me, climbing and walking is a great way to keep fit and active,” added Julie. “Although I must admit I wasn’t prepared for how I would feel afterwards; I have struggled and to start with kept waking up at night, thinking things like ‘Is this happening? Is this my bedroom?’ I was convinced, because we’d had some hot weather while we were away, that we’d had summer, and it was now autumn and nearly Christmas!

“We’re so very proud of each other for completing this and would like to thank everyone, all our friends and families for their support and all those who made donations – even people who don’t know us have been in touch. It really has been amazing.”