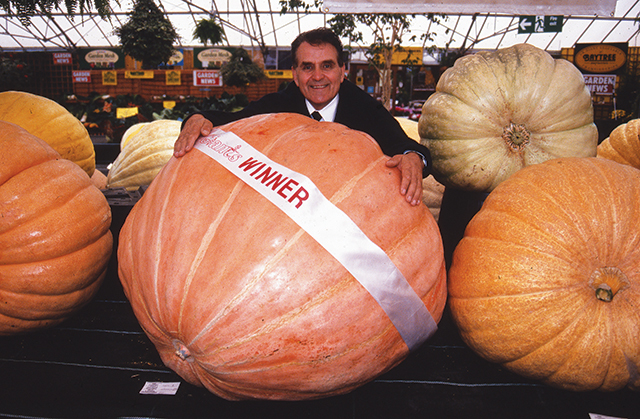 When Bernard Lavery established his own nursery and set up his own seed company he never dreamt what big things it would lead to – and big things they were indeed.

With a passion for breeding new vegetables and flowers, he began creating super-sized varieties which led him to claim a staggering 25 World Records – three of which still stand – plus 37 British Records.

Bernard’s work catapulted him to national fame, with appearances on shows alongside celebrities including Jonathan Ross, Bruce Forsyth and Melvyn Bragg and from there he landed a prestigious job in the Middle East, working for a sheikh who had his own grand plans to turn the desert green.

“The giant veg all started out as a bit of a hobby really,” recalls father-of-eight Bernard, who now lives in Crowland.

“I was just looking to see if I could develop something new; I got some pumpkin seeds from a friend and I produced this massive 710lb (50 stone 10lb) pumpkin, that’s what kicked it all off.

“Then I really got the bug and it just went from there – I grew giant radishes, carrots, broad beans, corn on the cob. The corn record is one that stands out, as it measured around a metre in length! It was a real feat of nature and just came right at the right time.

“But I never dreamt where it all might lead.”

Born in Liverpool, Bernard was evacuated during the war and was sent to live in a cottage on the 800-acre estate belonging to Sir Alfred McAlpine, in north Wales, and it is the time he spent here which he credits for developing his interest in horticulture.

Bernard’s mother died from a brain tumour when he was just 12. His three sisters were adopted but he was sent to live in a children’s home until he was 16, when he joined the merchant navy. After seven years at sea Bernard returned to Britain, settling in Bristol after marrying his first wife Hilary, who sadly died of breast cancer some years later.

“I was always interested in breeding new plants, new varieties of plants, messing about and trying to improve things and develop them for the commercial market,” says Bernard.

“I wasn’t interested in F1 hybridising, that was easy – you just had to follow the manual for that.

“I was more interested in establishing open-pollinated varieties of new vegetables and flowers, and eventually I managed it, although it was very hard work and involved a lot of research and study.

“When I did get a new variety, I had to grow them for four years to make sure they were okay before I could register them with the EU.

“That was alright, but sometimes, you could be thinking I’ve got something special here and then you’d just get into the third or fourth year and it would revert back to one of its parent types and you would lose that line altogether.

“When they were successful I would sell the seeds commercially, mainly to America.”

In order to make ends meet and provide for his family, Bernard took on a variety of part-time jobs to fit in around his nursery work.

These included working as a docker at Avonmouth, lorry driving and a job as a milkman, which he says was the best, as after starting early at 5am he could be finished with his round by lunchtime and spend the rest of the day tending to his vegetables and plants.

He also worked at Europe’s biggest open case coal site in Ffos-y-fran while continuing to grow his mammoth vegetables from the seeds he was developing.

His monster produce included the heaviest courgette in 1990, which weighed 64lb 8oz. In 1992 he produced the heaviest sprout at 18lb 3oz and the following year he grew the longest Okra vine, which measured 10m in length.

One of his other most memorable specimens was a huge cabbage, which weighed in at 124lbs.

“Over in America they have a lot of giant vegetable shows and they were always trying to beat my records,” says Bernard.

“They spent many years trying to crack my cabbage record. It was quite funny as they were using my seed, my expertise and my advice and each year they were getting closer and closer to 120lbs.

“That record ended up standing for about eleven years, but I got just as much pleasure out of it when it was broken and was pleased to have played a part in the new one.

“When I’ve achieved something, I don’t like to dwell on it, I just move on to the next thing.”

Bernard held his own giant vegetable competition which started at Alton Towers, before moving venue to Baytree Nurseries Garden Centre, near Spalding. The contest is still held annually but has now moved to Wiltshire.

A job with Suttons Roses brought him to Terrington St Clement, in Norfolk, before he settled in Lincolnshire, after taking on a nursery in Spalding.

His record-breaking ways continued, bringing a raft of media and television opportunities. He also wrote his own book to share his knowledge in 1995 called How to Grow Giant Vegetables and penned regular columns for Garden News and Amateur Garden magazines. Bernard started his own seed company too, selling them in garden centres nationwide and London store Harrods.

His next move was even more adventurous when in 1995 he was contacted by Sheikh Zayed bin Sultan Al Nahyan, the then ruler of Abu Dhabi, who wanted him to work as his agricultural consultant.

He took the job and headed out to the Middle East with his second wife Sharon, where he spent the next four years making the sheikh’s dream of turning the desert green a reality.

“It was wonderful, we had a great big house, brand new 4×4 – life was brilliant,” says Bernard of the experience.

Unfortunately ill health meant he had to return to the UK, but he still makes regular visits back to the place that was his home for five years and is now enjoying retirement and his new hobby – playing bowls.

“I had great fun growing the giant veg – although I must admit I’ve had good luck all my life, and have worked two days in one for the best part of it.

“I was privileged as I was breeding the seeds – and that’s the key; my advice to anyone else who would like to have a go at growing giant vegetables is you must have the right seed, if you don’t, you’re on a hiding to nothing!

“But I’ve had a very good life and have thoroughly enjoyed all my achievements, and particularly helping others towards theirs too.”