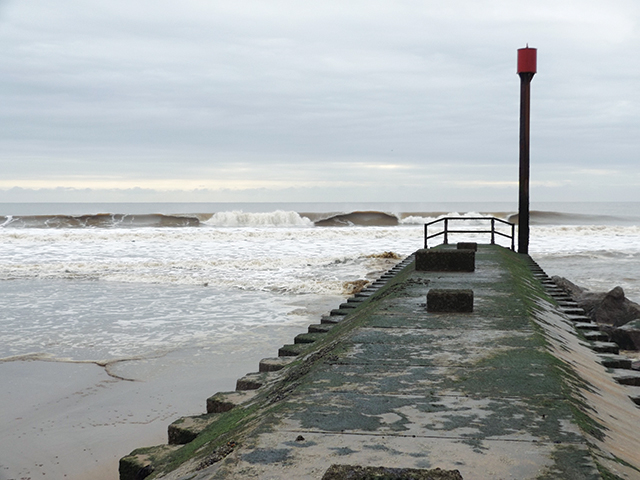 We all know that Lincolnshire has a magnificent cathedral in its capital. We all know it has green, rolling wolds, and of course we know about its long sandy coastline. What you probably don’t know about, though, are its surfers.
Granted, our part of the North Sea is not known for its waves. The county’s long coastline faces in a northeast direction and its waters tend to be shallow with constantly shifting sandbanks – not really the best conditions to create rideable surf. However, when the swells are just right, waves can kick up and when they do, there will usually be a small tribe of surfers hoping to latch onto them.

There have been a growing number of wave riders in the county ever since the 1970s. Sutton on Sea, or more accurately Sandilands, is one of the three or four spots that are surfable – often in the chill of winter but not exclusively.

Emma Rawlins has been surfing at Sandilands for about eight years. In the beginning it was simply part of her job. She explains: “I’d just started working as a beach lifeguard for East Lindsey (Skegness, Sutton on Sea and Mablethorpe beaches) and had spent a lot of time in the water training on the rescue boards. A couple of the other lifeguards surfed, so it inspired me to try it out. I bought my first board and just threw myself into the waves.”

Since then Emma has surfed further afield – from Scarborough to Bali – but there’s still something special, she says, about her local beach.

The spot, just south of Sutton on Sea, is relatively luxurious for surfers. There’s a car park (now free thanks to changes from the council), a toilet block and a cold water tap, where a line of tatty chalets stare out along the seawall, facing the zinc coloured sea.

On a day with waves, if you take a moment to stand and watch, you might see a dark object that appears and disappears with the swell. It looks like the head of an inquisitive seal but it isn’t. It’s a surfer, clad in black neoprene, sat on their board. Their gaze is directed toward the mirage of wind turbines, like fence posts on the horizon, but they are really looking at the water as it carries its wave of energy toward the beach.

The art of surfing is all about tuning in to this energy. The surfer tries to feel it through their feet and hands and board. Keep watching and eventually you will see the surfer turn toward the chalets, beginning to paddle. If they time it right they will harness the energy, scrambling to their feet to ride the wave. When you see this, the surfer is feeling the joy of harmonising with something bigger than themselves.

“Sandilands is just such a fun place to surf,” says Emma. “The waves aren’t always perfect, but we get plenty of surf to play around on and practice. It’s never overcrowded, so you’ve got space to just chill in the water and do your own thing. The waves might not always be up to the best standard, but there is a friendly feeling at Sandilands. There’s a great local bunch that get in the water as much as possible, so you’re always met by smiling faces. Oh, and it’s cold!”

Though surfing as a sport and culture became far more global and mainstream in the 90s, it retains an underground status in a county whose beaches are known as bracing locations for jolly fishermen and donkeys more than surfers. There is a friendly camaraderie that comes with pursuing such an alternative pastime.

Emma continues: “Everyone has always been willing to lend me a hand and give me advice on how to improve my technique, especially when I was younger and starting out. It was nice knowing that everyone looks out for each other too. It makes you feel safe in the water, even when you’re on your own.”

Emma has also been able to combine her love of surfing with a passion for art in the form of her paintings. “My aim is to capture the energy that I feel from surfing and portray this in my work, mainly through colour and brushstroke. This ranges widely, from the calmer surf sessions, where the painting will be more tranquil and still, to the more intense surf sessions, where the paintings will be much bolder.”

It was Sandilands that first opened the possibilities of art, surfing and travel for Emma and continues to do so. Once you’ve experienced riding a wave it becomes something you want to return to again and again. This is why Sandilands is such an important spot for the surfers of Lincolnshire.

Emma feels lucky to have grown up by the sea: “I would often spend time on the beach when it was at its purest; dawn and dusk. Often, with no one else around, I spent time sketching and taking photos ready for my next painting. I have always carried the ocean with me as my home and in my heart.”

Just like Lincoln’s cathedral or the world class produce grown in the county’s alluvial soil, surfing is just another bit of the magic to be found in the area. There are rolling wolds, but if you are patient and determined, you might also find some rolling waves.

Emma’s art is available on: https://www.etsy.com/shop/OceanImagery?ref=shop_name_search_sugg