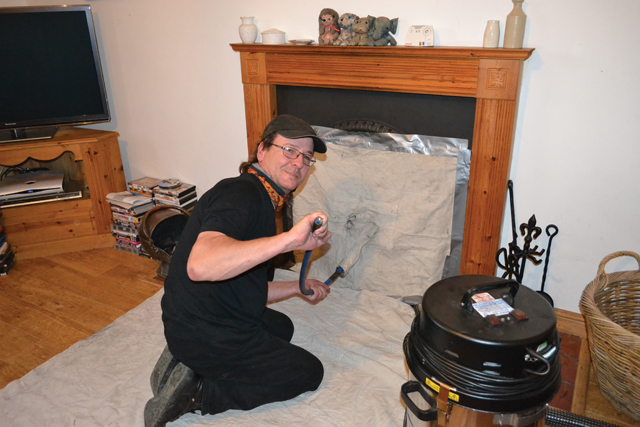 Sweep makes his own luck

It’s a far cry from his first career spanning more than three decades, but former farmer Andrew Cole is certainly embracing his new life as a master chimney sweep.
Having decided on a major career change, the forty-eight year old has relished the challenge of learning a new trade, working for himself and sharing his expertise and invaluable safety advice with his customers.

As a member of the prestigious Guild of Master Sweeps, Mr Cole, of West Pinchbeck, near Spalding, has completed a rigorous training program, which means that as well as cleaning commercial and domestic chimneys and flues, he’s also qualified to repair log burners, stoves and multi-fuel burners, plus offer advice on all other chimney and fireplace related issues.

“With over 150,000 log burners fitted in the UK last year, there’s more call for sweeping than ever,” he explained. “I’m really enjoying the work; everyone is very friendly and every day is different as the work is very varied.

“But since I’ve been sweeping, I’m surprised the fire and casualty rates aren’t higher – as most people are simply unaware of the dangers in their homes.

“Many insurance companies are not paying out for fire damage on appliances that have been caused by upswept flues or chimneys, which highlights the need to get a qualified sweep in, and get a certificate to show it has been maintained properly,” he added.

After leaving school at the age of sixteen Mr Cole worked on his family’s farm in West Pinchbeck, where, through day release he gained a raft of industry-related qualifications from Holbeach Agricultural College and his National Certificate in Agriculture from Caythorpe College.

From the early 1980s he helped build the business up from eighty to 400 acres, growing mainly vegetables and potatoes for the major supermarket chains, alongside wheat and sugar beet on poorer soils.

It was back in 2011, that due to personal circumstances, he decided it was time to leave the farm and try his luck on a new career path, although he was yet to decide what that might be.

“I’d been taking some time out to plan a new future, when one morning in January my wife Jane was watching the television and Lincolnshire Fire and Rescue were doing a piece about safety in the home,” he explained.

“An ex-policeman had trained as a sweep, and was really enjoying it, and my wife suggested I have a go. I was a bit reluctant at first, but I soon got to grips with the idea and joined the prestigious Guild of Master Sweeps.”

That was back in February, and since signing up Mr Cole has completed his extensive training course, which included five days’ training at the Safe Fire Centre, in Derbyshire, plus five full days of training around the country, with sessions in Cambridge, Norfolk and Yorkshire, alongside experienced training sweeps.

After sourcing all his own top of the range equipment, he then had to complete a full day’s practical sweeping with a Guild master examiner in Barnsley. The Guild of Master Sweeps is a professional body, designed to improve the standards and professionalism of the UK sweeping industry, while safeguarding the public from the risk of chimney fires and carbon monoxide poisoning.

To become a member, a chimney sweep must meet and adhere to strict criteria, while also achieving the highest minimum standards in the industry.

“As guild members we take pride in being the best, and giving every customer a first class service,” Mr Cole explained. “And we do so much more than just clean the chimney. There are many other sweeps operating around the country whose service is a lot cheaper, but many are not trained properly and give a poor service and advice – the cheapest isn’t always the best.”

Unlike other European countries, such as Germany and Slovakia, it is not a legal requirement in the UK to have your chimney swept. But last year, there were around 20,000 chimney fires across the country, while records for the previous year (2011) show there were 146 such blazes in Lincolnshire alone.

And these are not classed as accidental blazes – they are put down to poor maintenance. The primary causes of chimney fires are listed as infrequent sweeping, burning unseasonal wood, improper appliance size and overnight smouldering wood in stoves.

On top of this, Mr Cole explains there are other dangers to take into consideration too, like carbon monoxide poisoning from blocked flues, or poor ventilation.

Sweeping frequencies are only a guide, but the minimum requirements state smokeless coals, oil and gas fires should be swept once a year, while bituminous coal should be swept twice a year, and wood up to four times a year. A guild sweeper may even advise more regular cleaning, depending on each individual case, Mr Cole added.

During the last couple of months Mr Cole said he has been careful not to overfill his diary so that he can spend a bit more time with new clients, getting to know their appliances and making sure everything is done correctly – which means when the busier, winter months are in full flow he will be ready to get working up to full speed.

“I’m hoping to do more training in the future too,” he added, “which means I’ll be able to offer even more services and eventually, maybe even fit wood burners.

“I currently cover the area within a thirty-mile radius of Spalding and offer services including cleaning domestic and commercial chimneys and flues, removal of blockages and bird’s nests, plus I sell and fit cowls and bird guards and carbon monoxide and smoke alarms.

“I issue certificates, give timed appointments, can make chimney repairs and also offer helpful advice. I do discounts for multiple sweeps and pensioners too.”

*For more information or to obtain a quote Mr Cole can be contacted on 01775 640686 or 07767 818592. Alternatively visit the Guild of Master Sweeps website www.guildofmasterchimneysweeps.co.uk for more information and safety advice.