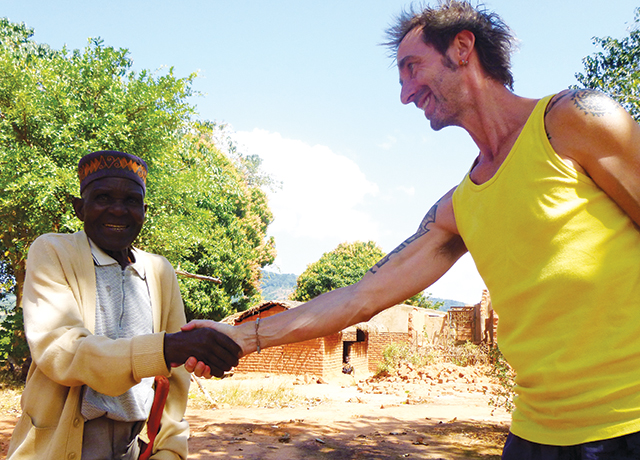 Taking up a new teaching challenge

His decision to leave Lincolnshire has been life-changing, but Kevin Troughton has also changed the lives of countless others by leading a project to build a much-needed school in a remote area of Africa.
Malawi is one of the world’s poorest countries, where the majority of students fail to finish their secondary education, but the opening of the Chimbota Private Secondary School, near the small lakeside town of Nkhata Bay, has made a huge difference to youngsters living in a rural part of the country who would not be graduating without its support.

Kevin, who lived in Lincoln for more than two decades, decided to leave the UK five years ago after getting a job at an international school in Africa.

A chance meeting with a local chief spurred him on to take up the project after they discussed the difficulties facing pupils, who often had to walk for up to two hours to reach the nearest school, and were too tired to concentrate once they arrived, which resulted in many dropping out.

“I’d just turned 50 and made the decision that it was about time I did something different before I ran out of time,” recalls Kevin.

“I thought I’d do something new and exciting, so I immediately applied for some jobs abroad and I got one in Malawi teaching drama.

“I had no idea what life would be like there but the country is a very welcoming one, the people are so warm and friendly.

“It was while I was on a break from school that I met up with a village headman and we talked about how the region had no secondary school and some of the difficulties facing students. The government is building a lot of primary schools, where many have classes of 100 children but if they can cope in a class of that number at least they get an education; secondary level schools are very thin on the ground apart from in the cities.

“I was seriously looking for a charity to take on and it set off in my head that this could be the right project.”

Based at the other end of the country, Kevin knew he wanted to leave the day to day running of the school to the staff, governing body and wider community but decided to press ahead with the build after finding a project manager he could trust to oversee things in his absence.

After a meeting with local chiefs and village heads plans quickly came together and Kevin, who is the school director, kick-started the build with money from his own savings.

“My blueprint, my experience was all based on European schools and a school based on my plans in Africa would not really be fit for purpose, which is why there had to be lots of discussion with the community,” he explains.

“We bought a half-acre piece of land and started building in 2013; there’s not a lot of red tape to negotiate in Malawi so things got underway quite quickly.

“It brought employment to the village – all the bricks are made onsite and everyone, from the building supervisor through to the people mixing the concrete and kids carrying the bricks, were from the local area – it was very much a community project.

“In Malawi wages are not high; we had half a dozen builders and three or four people mixing the concrete, which meant we kept it moving fast.

“I started things off with the money I was saving up – it’s not been enough and we’ve found it very hard to pull in sponsors as people need to see something. As people visit and spread the word, we’re slowly starting to get more support.”

Nevertheless in three years three classrooms have been built, a well has been dug for local people to use and there’s small solar installation too. And more plans are in the pipeline.

“We have big plans for the future,” Kevin adds. “We could build some community resources such as an internet café, which would be an extraordinary thing to bring into a rural village in Malawi.

“We could also build a mill, where local people could take the maize they have grown to be ground into flour rather than going to the local town, down the mountain which takes a day.

“Another big project for us is a girls’ boarding dormitory. The situation for girls in Malawi is that only seven per cent graduate from secondary school – the rest drop out.

“It’s difficult, but we need to do something about it. If we offer boarding it gets them away from the pressure of living at home. Girls do all the domestic work; as soon as they get home from school they are expected to get water, help with cooking, cleaning and looking after younger children in the evening. As soon as they get up they have to fetch water and sweep up before they go to school; they cannot cope with the pressure, get their schoolwork done and revise for exams.

“For all of these reasons a boarding house will massively help with the girls’ education.”

Like all schools in Malawi it is not free, but Kevin says fees are kept as low as possible – around £20 a term. Many families still struggle to afford this so a number of bursaries are available to help support students.

“Most people live in a village without mains electricity and no running water. Most homes have two or three rooms with a toilet outside and the people have to walk long distances to fetch water every day – life is very hard and it’s difficult to imagine when we’re living comfortably in the UK,” says Kevin.

“You see pictures on the television and it’s hard to believe millions of people live like that but that really is how it is here. It’s not changed in the last fifty to sixty years in terms of the standards of living; the only big difference now is having a mobile phone.

“I was fairly open minded moving to Africa – I didn’t know what it would be like.

“I miss my children; they are grown up and at university, and I probably see as much of them now as when I was in Lincoln. They have both been to visit and spend some time here, but it’s still a wrench saying goodbye.

“Most people thought I was having a mid-life crisis – there was a mix of people thinking it was a ridiculous thing to do, but also a lot were envious saying they wish they could do it, while many thought I was very brave.

“I didn’t see it as brave, I just thought it was going to be very different and something I needed to do.

“It’s extraordinary to be able to come here. There is a small expat bubble you could live in if really wanted to but I never wanted that; for me there was no point in coming if I wasn’t going to be part of the community. I wanted to get involved and be as much a part of it as I could.”

To find out more follow Chimbota Private Secondary School on Facebook or alternatively to find out how you can sponsor or volunteer at the school email chimbotaschool@gmail.com