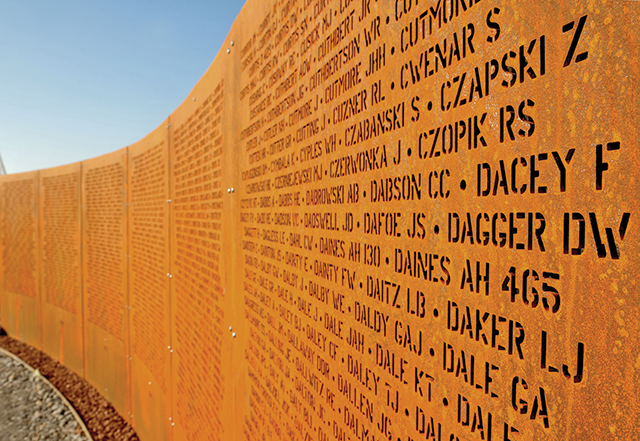 Six months from now the International Bomber Command Centre on Canwick Hill, Lincoln will open its doors to the public. In the first of six articles leading up to the opening ceremony, the project’s Losses Archivist, Dave Gilbert, describes the Losses aspect of the project.
The prospect of typing in the names of more than 26,000 men and women who were tragically lost from Bomber Command bases in and around Lincolnshire during World War II, and whose names are commemorated in Lincoln Cathedral, is a daunting one. That was the task I volunteered for almost four years ago in preparation for producing the Memorial Walls pictured above.

The Rolls of Honour are held in three leather-bound tomes, handwritten in copperplate script and kept in the Airmen’s Chapel. They encompass the losses incurred by 1 and 5 Groups, which were headquartered in Lincolnshire, and all of the Operational Training Units countrywide. Although time consuming, the task seemed straightforward enough and I was confident that I could comfortably complete it inside a year.

Eight months on I had captured all the names and, conscious of the enormous cost of the Memorial Walls, I set about checking that each was correct. To my dismay I found that the spelling in the Cathedral Rolls of Honour themselves left a great deal to be desired. I realised in an instant that correcting them was going to take more time than I was able to commit before my deadline, so I turned to BBC Radio Lincolnshire and they kindly put out an appeal for help. The response was overwhelming and we signed up more than ninety volunteers. Between us we checked each name for accuracy, making several thousand corrections.

By this point, my knowledge of Bomber Command had grown and as I worked through the list, my thoughts inevitably turned to the experiences of these brave souls, whose tragic yet compelling stories I could only imagine. This was no longer merely a list of names – it had the potential to become a fascinating account of the bravery of young men and women with whom I now felt an emotional connection and whose stories I was determined to tell. In short, it became my passion. No matter how large the personal sacrifice, it was nothing alongside the sacrifice made by each and every one of the subjects of this list.

We needed to capture far more information: squadron, station, aircraft, operation, how and when they died, next of kin, where they are buried and most importantly of all, personal anecdotes that bring humanity to each one. Knowing that a serviceman died in an operation over Berlin is one thing, but knowing that he voluntarily gave up his training as a doctor to do so gives tremendous social commentary.

Phase 1 of the Memorial Walls, bearing the names of the first 26,296 losses, was erected in the summer of 2015 in time for October’s unveiling ceremony, when more than 300 surviving veterans were in attendance. The walls are constructed from Corten steel, a material that rusts slightly, imparting a warm, ruddy glow, especially at sunset. This is particularly poignant as sunset is the time when the crews would have been taking off for night-time operations.

Although the Cathedral Rolls of Honour represent almost one half of the total Bomber Command losses, it was always IBCC’s aspiration to commission a second phase of Memorial Walls to capture the remaining losses, taking the total up to a staggering 58,000. I was only too keen to sign up! In January 2017 the artwork for Phase 2 was completed and has now been sent for manufacture in readiness for a September opening.

I take great pride in the fact that we have not only captured the losses of airmen, but also ground crew, whose sacrifices are often overlooked, and indeed all losses sustained by Bomber Command, including civilians, cadets, meteorologists, scientists, special operators and clandestine agents. Many are not commemorated anywhere else, yet some of the most fascinating stories stem from their inclusion. For example, civilian Dorothy Robson (aka ‘Bomb Sight Bertha’), a science graduate and acknowledged expert in bomb sights who attended an air test of her latest design, only to be killed when the Halifax bomber crashed. At her own request, her ashes were scattered from another Halifax.

The tragedy of Air Cadet Bond is another example of loss information uniquely held by IBCC. At 14 years of age he was the youngest person to die in a Bomber Command aircraft, when the Hampden in which he was taking an air familiarisation flight crashed, killing all onboard.

Another incredible story rediscovered due to the highly searchable nature of the digital database is that of pairs of brothers killed the very same day, flying with Bomber Command. It’s hard to imagine the grief felt by a mother when losing a son in his early twenties and it is surely impossible to imagine the grief on receiving two telegrams on the same day. Yet on at least four occasions that is exactly what must have happened. Here are details of two of them:
Canadians Ernest and Thomas Kirkham – both killed 3rd August 1943 on the same operation over Hamburg, one flying from RAF Dunholme Lodge and the other from RAF Skipton-on-Swale. Neither body was found, so both are commemorated on the Runnymede memorial.

Canadians Frank and Glen Burston were lost on 5th July 1944 on the same aircraft. This was strictly against the rules but Frank had been given special dispensation, as he promised his mother that he would look after Glen. This was their final training mission – a leaflet drop over Brest. They lie side by side in Brookwood War Cemetery.

No account, however brief, would be complete without the story of Pilot Officer Roi Saunders, who took his dog along on an operation and was shot down over France along with his entire crew. He and his dog are buried in the same grave in Haucourt Communal Cemetery. Sadly, we have yet to establish the dog’s name.

For each of the 58,000 losses we now have in excess of thirty pieces of information, meaning that there are at least 2.2 million individual pieces of information held in the database. I believe it to be the most comprehensive single source of information on the losses anywhere in the world and, I hope, a fitting testament to their incredible sacrifice. Their average age was just 23.

The entire database is available online and can be searched at www.internationalbcc.co.uk/archive.

A ROLE OF HONOUR
Dave Gilbert was raised in Hibaldstow, Lincolnshire and studied for a degree in electronics at the University of Sheffield. He owns two electronics firms in Gainsborough and has interests in others, ranging from recruitment to building. He lives in Welton with his wife Jane, a nurse, and has two children: Katie, 20 and Joseph, 18. He aspires to have a hobby one day, but there’s no time at the moment – he has a database to compile!

“None of my family served with Bomber Command. In fact, other than national service, none of my family has ever served in the armed forces. My knowledge of Bomber Command was, at the outset, no more than that of any other self-respecting Bomber County resident. So why, you could be forgiven for asking, am I the Losses Archivist for IBCC?

“The story begins in 2009 when one of my firms won the prestigious Queen’s Award for International Trade. We held our ceremony in the august surroundings of Lincoln Cathedral’s Chapter House where Tony Worth, the then Lord Lieutenant, presented our award on behalf of the Queen. Several years later Tony graciously invited me to the IBCC launch event. Lunch under the wings of a Lancaster – who could possibly refuse? Well actually, I did – initially. The event seemed to be for the great and the good and I don’t consider myself to be either. I spoke to Nicky Barr, IBCC’s director, and was told in no uncertain terms that I should go: ‘but don’t forget there’s no such thing as a free lunch.’

“During the event I asked Tony how the names of the losses would be digitised from the Cathedral Rolls of Honour. His answer: ‘I haven’t got a clue. Have you?’ And in that moment, my life changed forever. Looking back, all my life seems to have been nothing more than preparation for this role and it is the piece of work in which I have the greatest pride.

“And my motivation – other than seeing a job well done? Well in my line of work, products are quickly outdated, so the opportunity to work on something which will be around long after I’m gone is very attractive. The notion of my grandchildren taking their grandchildren to see the memorial and them thinking that their great, great granddad Dave did a decent job is motivation enough.

“Working on this project has been a tremendous privilege and I consider myself so very lucky to have had the opportunity to spend time getting to know every single one of the 58,000 through my research. The work is far from complete of course – there’s always something new to add and I’m quite sure I’ll be doing so for the rest of my life. Phase 3 also beckons: to commemorate the pre- and post-war losses and the Mediterranean/Middle Eastern losses.

“Almost four years on from my conversation with Tony, and more than 4,000 voluntary hours later I must, however, concur with Nicky’s warning: there really is no such thing as a free lunch!”