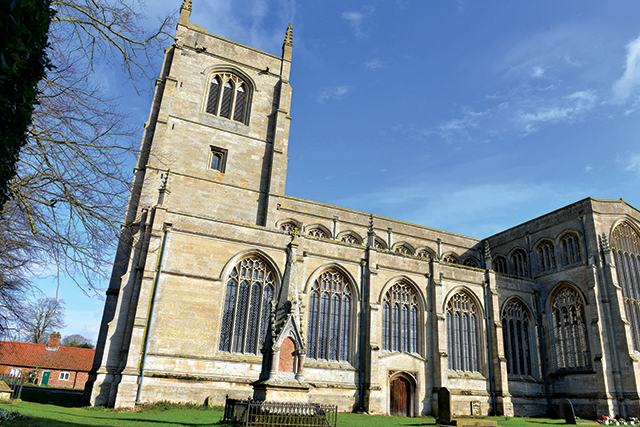 These small Lincolnshire villages have much to offer visitors in terms of attractions, historical sites and things to do. No small wonder the area is officially ranked among the Top 20 rural tourism destinations.
Tattershall is dominated by the 130ft red brick tower of its medieval castle, which was built in 1434 by Henry VI’s Lord High Treasurer Ralph de Cromwell, who was the 3rd Baron Cromwell. The tower is a masterpiece of early English brickwork and is one of the most important fifteenth-century brick keeps in the country.

It also has an ancient scheduled monument in the form of an octagonal fifteenth-century Buttercross which stands in the Market Place at the heart of the village’s small shopping area and is a Grade I listed structure.

Adjacent to the castle is the Grade I listed Holy Trinity Collegiate Church, which has medieval stained glass, a collection of brasses and an intact rood loft.

Near the font is a plaque marking the grave of Tattershall resident Tom Thumb, who was reputed to be just 18.5 inches (47 cm) tall and died in 1620 at the age of 101. His small house can be seen on the roof of a larger house in the Market Place.

Add to that the popular Tattershall Farm Park and one of the county’s best holiday parks, Tattershall Lakes Country Park, and you can see why it is firmly on the UK’s destination map.

The location saw an increase of more than 40 per cent in visitor enquiries during 2016 and it attracted 41.2 per cent more interest to rank 17th on the list of rural destinations for popularity.

Tattershall parish council clerk Karen Elliott said: “Tattershall with Thorpe Parish Council is proud to be custodians of part of the Historic Environment of the parish, which includes Tattershall Castle and Holy Trinity Collegiate Church.

“It is working together with the Parochial Church Council to put in a grant application to Historic England to fund urgent repair works that are required on the medieval south church wall.

“The Buttercross in the Market Place which is a scheduled ancient monument and makes up part of the conservation area is also being re-pointed to preserve it for future generations. And Tattershall Thorpe will be entering the CPRE Best Kept Village competition this year, as well as the East Midlands in Bloom competition.”

Following its use as a grammar school for tenants of Lord Cromwell and his descendants, the building was converted into a malthouse in the late eighteenth century. Following a local campaign it was saved for the nation in 1972 and is managed by Heritage Lincolnshire in agreement with English Heritage.

Neighbouring town Coningsby is better known for its RAF base than for historical features or tourist spots. But it still attracts visitors in its own right thanks to the Battle of Britain Memorial Flight and the BBFM visitor centre located at RAF Coningsby.

Since it opened its doors in 1986, the BBMF visitor centre has welcomed in excess of 300,000 people offering them the chance to see the flight’s historic aircraft at close quarters. The RAF base is just half a mile from the town itself.

From its creation shortly before World War II to today, RAF Coningsby has had a wide variety of roles. Originally built as a station for Bomber Command, Coningsby went on to host the world famous ‘Dambusters’ 617 Squadron and Vulcan jet bombers before transferring to Fighter Command in the 1960s.

After a period of uncertainty following the cancellation of the TSR2 project, the station became synonymous with Phantoms and for twenty years was responsible for the training of all RAF Phantom pilots and navigators. When this much-loved aircraft was finally replaced by the Tornado F3, Coningsby was again chosen as the main training base and this trend has continued with the Typhoon, the RAF’s latest high-tech fighter.

In April 2006 No 6 Sqn relocated to RAF Coningsby from RAF Coltishall, to fly the remainder of the Jaguar fleet until its disbandment.

It was in 1937 that work on building an aerodrome at Coningsby began. At the outbreak of war it was still under construction and did not become a Royal Air Force Station until 4th November 1940, as a bomber airfield in No 5 Group. The first squadron, No 106, arrived in February 1941 and operations began the following month when four Hampdens bombed Cologne.

Coningsby aircraft flew in the famous ‘Thousand Bomber’ raid on Cologne in May 1942, but from September 1942 to August 1943, whilst hard runways were laid, offensive activities ceased.

The town takes its name from the Old Norse konungr meaning ‘King’ and the Old Norse noun by meaning ‘settlement’, which gives ‘settlement of the King’. Coningsby and Tattershall are separated by the River Bain.

It had a railway line passing through the village for fifty-seven years but it closed in 1970 and the site of the former railway station is now the Coldham Road Industrial Estate.

ARRIVE AND DRIVE AT TATTERSHALL KART
Everyone is welcome to visit Tattershall Karting Centre to try one of their 270cc single engine corporate karts. Challenge your friends to a race on the 800-metre outdoor circuit set in attractive woodland in the Lincolnshire countryside. The circuit complies with international guidelines and also provides excellent spectator viewing.

Arrive and drive – no booking is necessary but advisable to avoid disappointment. All protective clothing is provided to make your day enjoyable in all weather conditions.

Race and test days can be arranged for special days and times, contact Tattershall Kart for details.

Corporate rates – why not impress your friends and business colleagues with an exciting day at the 800-metre circuit, where you can challenge them on the race track.

Children from the age of 8 years can enjoy a birthday party to remember. Arrange a race day with their friends in special children’s karts on a specially adapted circuit, provide your own party food and drink and use our clubhouse. Please contact Tattershall Kart for further details. Tel: 01526 344566

RAF BATTLE OF BRITAIN MEMORIAL FLIGHT
The RAF Battle of Britain Memorial Flight is a household name and a familiar sight in the skies over Lincolnshire. Based at RAF Coningsby, which is now one of the Royal Air Force’s most important stations, it is part of Britain’s heritage and was formed in 1957 to commemorate the RAF’s major battle honours.

It consists of six Spitfires, two Hurricanes a Douglas Dakota and PA 474 Avro Lancaster. This is one of only two remaining airworthy Lancaster aircraft that can be seen flying.

Not surprisingly then, it has its own visitor centre which opened on the base in March 1986.

A partnership between the Royal Air Force and Lincolnshire County Council, the centre allows visitors an up-close guided tour of the aircraft when not in use, as well as exhibits about the aircraft and other temporary exhibits.

Following World War II it became traditional for a Spitfire and Hurricane to lead the Victory Day flypast over London. In 1957 the Historic Aircraft Flight was formed at RAF Biggin Hill to support a historic collection of flyable aircraft. Initially this was to commemorate the RAF’s involvement in the Battle of Britain but broadened to commemorate the RAF’s involvement in all the campaigns of World War II.

The group became the ‘Battle of Britain Memorial Flight’ in 1973, with the acquisition of the Lancaster and it moved to RAF Coningsby in 1976.

Coningsby has some other interesting features such as the clock on the tower of the fifteenth-century parish church of St Michael’s.

As well as only having one hand, its face is painted directly onto the wall of the tower and it is thought to have been installed in the seventeenth century.

It is one of only a few one-handed clocks in the country and is reputed to be one of the largest of its kind in the world measuring just over sixteen feet in diameter with the hand being nearly nine feet long.

Unsurprisingly, there is also a war memorial which was built by Thomas Kent of Boston and erected in memory of those who lost their lives in the Great War of 1914–1918.

It is made of broken Aberdeen red granite on a Portland stone base. The broken column depicts the broken lives of those young men and women who perished in the war.