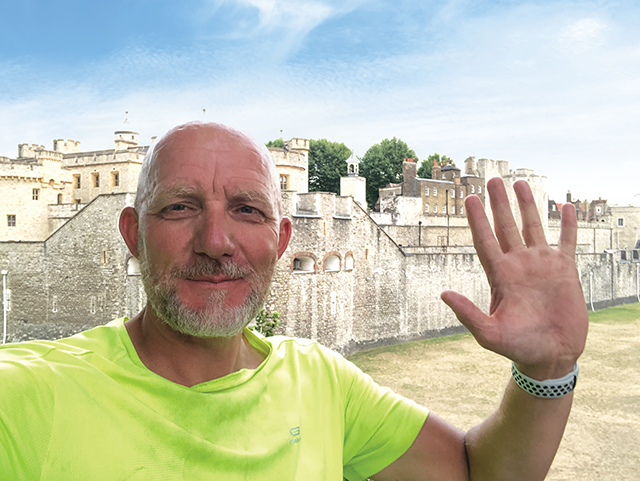 Its motto says it’s a ‘school that cares’ and staff at Western Primary School in Grimsby went above and beyond to live up to this during lockdown. Kate Chapman caught up with assistant headteacher Zane Powles, who walked more than six miles a day delivering free school meals to pupils in need.

As soon as the government announcement came in March that schools would be closing to all but the children of keyworkers, Zane and his colleagues set about drawing up a plan to ensure the most vulnerable children in their care would still get their free school lunch.

They used a map of the area to plot where all the affected families lived and then Zane volunteered to deliver food to the majority on foot, while headteacher Kim Leach and her deputy Ellie Dean used their cars to take more pack ups to those children living in outlying villages.

In total Zane delivered more than 7,500 meals over the course of 17 weeks, walking on average six-and-a-half miles each day. Not one to rest on his laurels, instead of spending his summer holidays taking a well-earned break, he set himself a gruelling 1,500-mile charity cycling challenge, which to date has seen him raise more than £8,400 for two causes.

“Pupils who have academic, emotional, behavioural or social problems and for whatever reason cannot go elsewhere, we take them in – we just feel that no child should go without provision.

“It was a big undertaking to deliver the meals, but it was just something we had to do – a lot of our parents do not have a lot of money.

“I have been that child; I had a bit of a tough time as a youngster and moved numerous times by the time I was 11. I’m sure at that time my mum was supported, so it’s nice to be able to do something and give something back.”

Western Primary School has 305 pupils on roll, with almost half qualifying for pupil premium funding. As well as delivering packed lunches to more than 110 children, Zane and his colleagues had to make them all up each morning before they could be distributed.

“We were in school at about 7.30am each day putting the rolls and pack ups together – these weighed about 50kg once I was carrying them all,” recalls Zane, who has been a teacher at the school for nine years.

“But it was great going round and seeing all the children – more often than not they would be waiting at the window for me. Once I’d rung the bell and left the pack up, and got back to the gate they would come out to talk to me. It was a good opportunity to see them all, and their parents, and to make sure that everyone was safe and coping okay – for some families I would be the only other person they saw all day.

“It wasn’t just vital food parcels I was delivering; I was also helping some parents fill in documentation, I took Easter eggs, meat hampers and homework packs around and then the children were asking me to pass messages on to their friends.

“Many families don’t have access to social media, so the children were asking me to give notes to their friends and tell them that they missed them – it was lovely.”

After delivering meals to pupils for more than four months, Zane decided to spend his summer holidays completing another epic feat. He came up with the challenge of cycling around the capital city castles of the British Isles – starting from Ross Castle, in Cleethorpes, he cycled to Edinburgh, Belfast, Dublin, Cardiff and London before returning to Cleethorpes – a total of 1,500 miles in all.

His fundraiser was in support of Meals & More – a national charity providing support to children who live with poverty and social isolation and have limited access to adequate food provision and activity throughout school holiday periods – and FLAG, an organisation in Grimsby, which supports Special Educational Needs and Disability (SEND) children by enriching their lives, providing recreational activities, developing social and independence skills and empowering them to play a rightful place in the community.

Zane’s epic ride started at the end of July and took 16 days to complete – dogged by the weather and mountainous terrain in some areas. He has so far raised £8,400. He’s since sold the bike he rode and is donating the money he received for it to the charity pot and hopes to make £10,000 before his fundraising page closes later this year.

“I usually spend the summer holidays travelling around a bit, but because I couldn’t do that this year, I thought I’d do something else, something for charity,” he explains.

“It was tough, the weather wasn’t great. I started off heading towards Scotland, pulling a 30kg trailer up and down the hills, which was hard. Then in Belfast it was raining, but as I moved into southern Ireland I had the best weather and I had a beautiful day relaxing in Wexford.

“Wales was tough, my bike sat nav showed a bridge crossing an estuary – it took me about two hours to cycle the eight miles to get there, as the going was so tough and it was raining and when I arrived there was no bridge. I had to go back the way I had come – that was very difficult.

“As soon as I crossed the border into England the weather changed, and it was great cycling into London. My body ached for a while after, especially my knees, but I’m so pleased I’ve done it.”

Zane and his colleagues are now busy preparing for their return to the classroom and he is particularly looking forward to welcoming all the children back to school.

“I’m really glad all the children are going to be back, not just academically – it will be good for their emotional health and also socially, they need to see their friends,” he added. “Hopefully they felt really supported while they were off – our school motto is the ‘school that cares’ – and we really do care about the kids.

“These are challenging times and we just have to do what we can – everyone here has been working together, it’s not just me, all the staff have been awesome.

“It’s been tough for the families, they’re the ones who had to stay at home but now we’re looking forward to being back together in our new normal for the time being.”

Anyone who would like to support Zane’s fundraising efforts can do so online at https://uk.virginmoneygiving.com/ZanePowles-Cycle_Capital_City_Castles