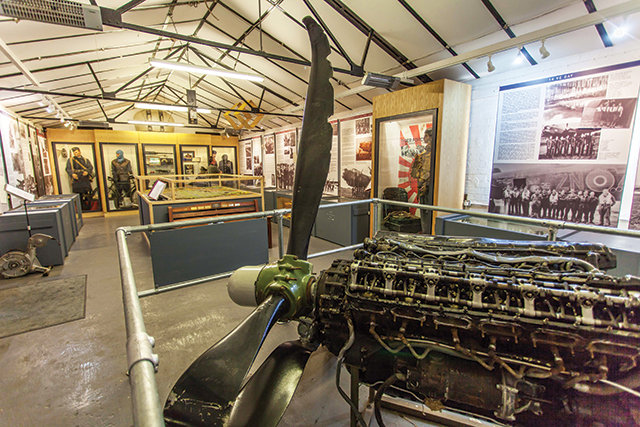 Telling the story of aviation heritage

The county’s association with military aviation began during WW1 and by the end of WW2 there were forty-nine active airfields in Lincolnshire. We invite you to tour some of these sites, visitor centres and museums which tell the stories of the squadrons and their crews.
METHERINGHAM AIRFIELD VISITOR CENTRE
In 1942 600 acres of farmland were cleared to make way for the Metheringham Airfield which opened in 1943 in time for the Battle of Berlin. 5 Group Bomber Command and 106 Squadron, which were based at RAF Metheringham, went to war in the same year on 26th November in order to fight in Berlin. Around 2,500 people worked at the airfield during its peak with sick bays, living quarters, stores and administration blocks being erected apart from the airfield for security. The site is used today by the Friends of Metheringham Airfield who have been able to refurbish the museum in order to introduce the Lancaster Exhibition which allows visitors to learn about the training involved in operating the aircrafts that were used during the Second World War.
Westmoor Farm, Martin Moor, Metheringham, Lincoln LN4 3WF
Tel: 01526 353879
Email: jeffery.williams@hotmail.co.uk
Web: www.metheringhamairfield.co.uk

RAF CONINGSBY – BATTLE OF BRITAIN MEMORIAL FLIGHT
RAF Coningsby was opened in 1940 as a Bomber station with hard runways being laid in 1943 in order to prepare for heavy planes to be stationed there during the Second World War. From August 1943 to January 1944, No 617 Squadron, the Dambusters, flew Lancasters from the airfield. In 1986, the Battle of Britain Memorial Flight (BBMF) Visitor Centre was opened and has since welcomed over 300,000 people allowing visitors to view the historic aircrafts up close and meet the technicians who are hoping to restore the crafts to airworthy conditions. Visitors are shown round the hangar by guided tours who have first-hand experience of the numerous aircrafts and have significant understanding of the exhibitions.
Baxter Close, Coningsby, Lincoln LN4 4SY
Tel: 01522 782040
Email: bbmf@lincolnshire.gov.uk
Web: www.raf.mod.uk/bbmf/visitorscentre

RAF SCAMPTON HERITAGE CENTRE
RAF Scampton stands on the landing field of the First World War Flying Corps and has provided a home for the RAF Aerobic team, the Red Arrows, since 1983. During the war, Scampton lost a total of 551 aircrew and 266 of its aircrafts. On 21st March 1943 617 Squadron, Bomber Command, was formed under the command of Wing Commander Guy Gibson. The squadron was tasked with breaching the Möhne, Eder and Sorpe Dams and from this time became known as the Dambusters. The airfield has created a Heritage Centre which contains over 400 artefacts, Guy Gibson’s Office and the Blue Steel Missile which was used as a major part of Britain’s nuclear deterrent in the 1960s.
RAF Scampton, Lincoln LN1 2ST
Tel: 01522 738361
Email: rafscamptonheritagecentre@gmail.com
Web: www.raf.mod.uk/rafscampton/aboutus/location.cfm

RAF DIGBY SECTOR OPS MUSEUM
JSSO Digby is a former Royal Air Force station which has been operated by the UK Joint Service Signal Organisation since 2005. It is currently home to all three services from the Armed Forces and the United States Forces. The Sector Ops Museum contains a large collection of photographs of the various pilots and aircrafts that were positioned at RAF Digby during the war and a collection of documentations can be viewed by visitors which give detailed information about the various operations that were carried out in the years 1939-1945. As well as this, visitors can view scale models of some of the most famous aircrafts that took off from Digby as well as actual parts from the various aircrafts, including the engine from the Hurricane aircraft.
Cuckoo Lane, Digby, Lincolnshire LN4 3LH
Tel: 01526 327272
Email: digby@hivegb.co.uk
Web: www.raf.mod.uk/rafdigby/aboutus/sectoropsmuseum.cfm

RAF WICKENBY MEMORIAL COLLECTION
Wickenby Royal Air Force Station was built in late 1942 and early 1943 and was occupied by No 12 Squadron. Wickenby largely contributed to the Bomber Offensive as it took part in many of the major bombing raids in Berlin, Nuremberg, Essen and Munich. During its years of active service, around 1,080 lives were lost in the conflict and their sacrifices have been immortalised in the Wickenby Memorial which is based in the Old Watch Office at Wickenby Aerodrome. The Wickenby Museum was opened in the 1990s and contains a large number of artefacts relating to the Lancaster aircraft and their pilots. Crew uniforms, medals and radios are also on display. The Archive contains log books, diary entries and casualty records in order to give visitors an authentic look at life at the Digby station during the war.
The Control Tower, Wickenby Aerodrome, Langworth, Lincoln LN3 5AX
Tel: 01673 885000
Email: wickenbymuseum@outlook.com
Web: www.wickenbymuseum.co.uk/index.html

RAF WADDINGTON HERITAGE CENTRE
Waddington Royal Air Force Station first opened in 1916 and later went on to station pilots who fought in both World Wars as well as having significant involvement in the Falklands War taking part in the Black Buck Raids. Crews from RAF Waddington also took part in the Black Buck Raids by bombing the Port Stanley Airfield. The Waddington airbase now contains many exhibits for visitors including the remains of a Lancaster PD259 which is complemented by audio and video footage of a real life bombing mission and visitors are able to sit at the front of the fuselage where the cockpit would have been in order to give visitors a distinct feel of the period during Waddington’s years of service.
RAF Waddington, Lincoln LN5 9NB
Tel: 01522 727367
Email: WAD-Heritagecentre@mod.uk
Web: www.raf.mod.uk/rafwaddington/aboutus/heritagecentre.cfm

LINCOLNSHIRE AVIATION HERITAGE CENTRE – RAF EAST KIRKBY
RAF East Kirkby is a former Royal Air Force Station that was built in August 1943 as a Bomber Command Station with 212 total operations being carried out during the Second World War. The Aviation Heritage Centre that is situated in East Kirkby was opened to the public in 1988 by Fred and Harold Panton. Fred and Harold Panton managed to acquire an Avro Lancaster in the 1970s and it was made the centrepiece of their public museum. The museum also contains many parts of various aircrafts including an original Barnes Wallis Bouncing Bomb and the original Control Tower has been restored to show what life was like for those who were involved in the various missions at East Kirkby.
Lincolnshire Aviation Heritage Centre, East Kirkby, Spilsby PE23 4DE
Tel: 01790 763207
Email: enquiries@lincsaviation.co.uk
Web: www.lincsaviation.co.uk

THORPE CAMP VISITOR CENTRE
The Thorpe Camp Visitor Centre tells the story of the airfield and what life in Lincolnshire was like during the Second World War. It was built in 1940 as part of the No 1 Communal Site and had a planned lifespan of only ten years. The wartime buildings have been restored to show how people lived through the war period and provide visitors with an insight into the lives of civilians during the war with displays on air raid shelters, gas masks, propaganda posters encouraging women to take part in evacuation services and a display of a bomb damaged house. The site also contains exhibits about the numerous aircrafts and squadrons that were positioned at the camp, models of the various aircrafts including the Vulcan and a training aid is displayed which was used in the war to teach cadets about flying a spitfire.
Tattershall Thorpe, Lincoln LN4 4PL
Tel: 01526 342249
Email: mjhodgson@lancfile.demon.co.uk
Web: thorpecamp.wixsite.com/visitorscentre

CRANWELL AVIATION HERITAGE MUSEUM
Royal Air Force College Cranwell (the first Military Air Academy in the world) is probably the most famous landmark in Royal Air Force (RAF) history. Cranwell Aviation Heritage Museum portrays the fascinating story of this historic establishment from its early days as a Royal Naval Air Service base to the current day.
Discover the history of RAF Cranwell/RAF College Cranwell through artefacts, storyboards, displays and exhibits. Try your hand on our interactive exhibits including a flight simulator where you can attempt to land a Jet Provost on the runway at RAF Cranwell before your fuel runs out!
Heath Farm, North Rauceby, Sleaford, Lincolnshire NG34 8QR
Tel: 01529 488490
Email: cranwellaviation@n-kesteven.gov.uk
Web: community.lincolnshire.gov.uk/Cranwellaviationheritagemuseum

INTERNATIONAL BOMBER COMMAND CENTRE
The International Bomber Command Centre project involves preserving any information about the individuals that were affected by the Bomber Command during the Second World War. The IBCC will be one of the most comprehensive records of Bomber Command in the world and will be open to the public in December 2017. During the Second World War, more than a million men and women supported Bomber Command with the majority coming from the UK and Commonwealth countries. Out of the 125,000 aircrew who served, it has been predicted that around 72% were killed or seriously injured and so the centre is currently being developed to commemorate those who served in the RAF Bomber Command who significantly changed the outcome of World War Two.
Canwick Hill, Lincoln LN4 2RF
Tel: 01778 421420
Email: nicky@internationalbcc.co.uk
Web: internationalbcc.co.uk

LINCOLNSHIRE ARCHIVES
Lincolnshire Archives was established in 1948 as a county service which compiles all the records gathered from the Lindsey, Kesteven and Holland County Councils. The Archives has information on Lincolnshire’s Aviation Heritage as visitors are able to access the Aviation Oral History Stories. These are stories from the Second World War and the Cold War which detail significant events from particular aircraft that fought during these wars. There are extensive stories that can be found in the Archives concerning aircrafts such as the V-Bomber squadrons of the V-force as well as the Thor and Bloodhound Missile Crews that were present during the era of the Cold War allowing visitors to gain a better understanding of Lincolnshire’s Aviation Heritage.
St Rumbold Street, Lincoln LN2 5AP
Tel: 01522 782040
Email: customer_services@lincolnshire.gov.uk
Web: www.lincolnshire.gov.uk/libraries-and-archives/lincolnshire-archives

For more information on any of the sites, or for more trails, visit www.aviationheritagelincolnshire.com