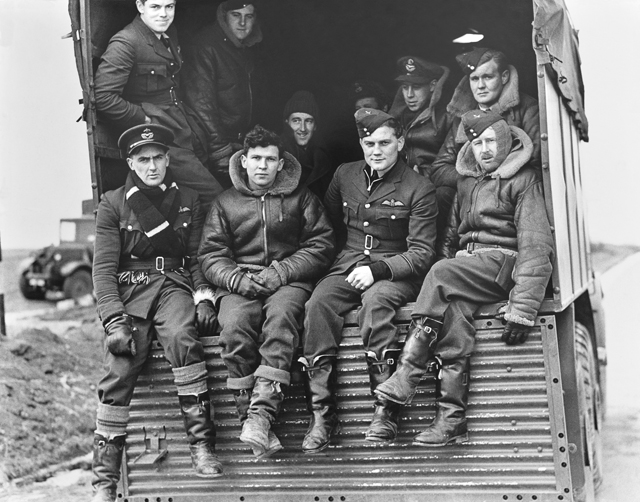 The Battle of Britain – A Lincolnshire perspective

Whilst most of the commemorations have taken place in the south of England, where the main thrust of the Battle took place, Lincolnshire has its own story to tell.

Digby was home to several fighter squadrons as well as being home to ‘Lima Sector’ operations centre, housed in its own bunker. From there members of the Women’s Auxiliary Air Force (WAAF) plotted raids on a massive plotting table such that the executive officers within the operations centre could decide when to scramble the pilots. Radar stations at Skegness and Stenigot provided the essential early warning of the incoming raids which the fighter pilots would engage. Many of these pilots had been trained at the Operational Training Unit (OTU) at Sutton Bridge in the south of the county, one of many fighter OTUs scattered across the country.

A similar Sector Operations Centre had only just been completed at Kirton in Lindsey, to the north of Lincoln. Similar in design to the bunker at Digby, this was the operations centre for ‘Mike Sector’ with the respective fighter squadrons based at the airfield. Quite often some of the fighters were deployed to the airfields at North Coates or Sutton Bridge.

Whilst the main focus of the enemy’s thrust was against the south, Lincolnshire was to experience an intense air battle over the skies of its eastern coast in what was to be known as the ‘Skirmish over Skegness’. Normally there would have been three fighter squadrons resident at Digby but for various reasons on 21st August that summer only 611 Squadron was available for action.

At around midday a substantial raid is detected approaching the Norfolk coast. It then splits into two sections, with one section flying north up towards the Wash and seemingly heading up the east coast to Hull. ‘A’ Flight of 611 Squadron is scrambled into action and engages the raid as the battle moves to Skegness. As the Spitfire pilots counter the enemy Dorniers a second raid is detected and 611 Squadron’s ‘B’ Flight is scrambled. Eventually both flights are dogfighting in an enormous melee over the coast and see off the intruders. In all, four enemy aircraft were destroyed and whilst 611 Squadron had repelled the raid with no loss of life, seven of its Spitfires were damaged.

Some of the aircrew who fought in the Battle hailed from Lincolnshire. One particular pilot was John Bell. He was a member of the Auxiliary Air Force (AAF) and had joined 503 Squadron, which was the Lincolnshire AAF squadron based at RAF Waddington. Disbanded in 1938, the Squadron members of 503 were invited to join 616 Squadron, a newly formed AAF Squadron based at Doncaster. John was one of the few members of 503 Squadron to take up the offer.

Flying Spitfires in 1940, 616 Squadron saw action over the beaches of Dunkirk and on 1st June John had to ditch in the English Channel, having engaged a section of enemy fighters, during which he was credited with destroying one. Fortunately he was picked up by a Royal Navy ship and he was able to rejoin his Squadron.

By late August, 616 Squadron was based in the south of England at RAF Kenley, being scrambled three to four times a day to fight off the enemy intruders. Sadly, John died following combat on 30th August and is buried in Eastgate Cemetery in Lincoln. He was twenty-three years of age and had been ‘Mentioned in Dispatches’. Each year No 204 Squadron of the Air Training Corps holds a ceremony at his graveside in tribute to Flying Officer John Bell.

One of the challenges facing Fighter Command during the summer of 1940 was to develop night-fighting skills. 29 Squadron was based at RAF Wellingore flying the Blenheim equipped with an early variant of Airborne Interception (AI) radar and was honing its skills in night interception. It was whilst flying with 29 Squadron that another young Lincolnshire aviator lost his life. Norman Jacobson, from Grimsby, was just eighteen years of age when he joined the RAF in 1940. He was quickly selected to undergo specialist training as an AI Operator and was posted to 29 Squadron in the August. On the night of 25th August he was part of the three man crew of a Blenheim that was scrambled to investigate a possible intruder over the Wash. Nothing more was heard from the crew but two days later Norman’s body was recovered from the sea by His Majesty’s Trawler Alfredian.

The Alfredian was an armed trawler operating out of Grimsby whose skipper was John Vincent, a veteran of Shackleton’s Antarctic Expedition in 1914. The crew buried Norman at sea and he is commemorated on the Runnymede Memorial. One wonders if the crew would have brought his body ashore had they known that his parents lived in their home port of Grimsby. Norman is one of the youngest aviators to die in the Battle.

Whilst Fighter Command was busy preventing the enemy from gaining air superiority over the skies of Britain, Bomber Command was playing a crucial role in disrupting the German Navy’s efforts in assembling an invasion fleet the other side of the Channel. Such activity involved the bomber squadrons based in Lincolnshire in what became known as ‘The Battle of the Barges’.

On 12th August Flight Lieutenant Roderick Learoyd and his crew was tasked, along with other crews from 49 and 83 Squadrons, with attacking the Munster aqueduct of the Dortmund-Ems canal in Germany. The canal was a major communication link along which the Germans were moving essential supplies in support of the intended amphibious invasion. Taking off from RAF Scampton flying Hampden twin engine bombers, the aircraft were to fly a daring low-level night attack to destroy the viaduct where the canal crossed the River Ems. Two Hampdens were lost on the raid but Learoyd scored a direct hit and put the canal out of action. He then nursed his badly damaged Hampden back to Scampton and as the aircraft’s hydraulic system was damaged he circled until daylight before attempting to land. For his bravery he was awarded the Victoria Cross.

On 15th September, 83 Squadron was in action again but this time attacking the barges in the port of Antwerp, Belgium. Flying as a wireless operator/air gunner in one of the Hampdens was eighteen-year-old Sergeant John Hannah. After a successful attack, his aircraft was subject to intense fire from the enemy’s anti-aircraft artillery. The aircraft was set on fire and two crew members bailed out. Young Hannah fought the fire, first with the aircraft’s fire extinguishers and then with his bare hands. Though sustaining serious injuries he was able to put out the fire and the pilot was able to bring the aircraft safely back to Lincolnshire. For his bravery John Hannah was awarded the Victoria Cross. He remains the youngest member of the Royal Air Force to be so honoured.

With the skirmish over Skegness, two Victoria Cross awards and the sacrifice made by the sons of Lincolnshire, the county certainly has its own Battle of Britain story to tell.

You can visit the Lima Sector Operations Museum on Sunday mornings up until the end of October. Meet in the RAF Digby sports field car park opposite the main entrance at 11am and the guides will escort you to the museum. Voluntary donations welcome. A visit to the Battle of Britain Memorial Flight Visitor Centre at RAF Coningsby is also highly recommended. Open Monday to Friday, to find out further details, including the cost of the hangar tour, go to www.lincolnshire.govuk/bbmf