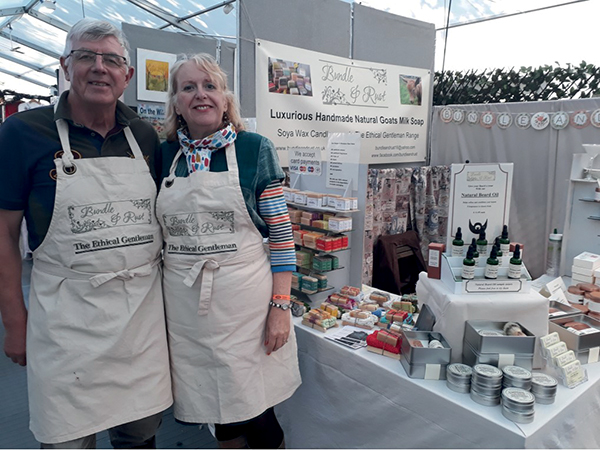 With its nourishing qualities and many benefits, goat’s milk has long been a popular choice for those in search of healthy alternatives – but now there is an increasing demand for it in soaps and beauty products too.

Creamy, gentle and nourishing with soothing properties, goat’s milk skin products are soaring in popularity, with businesses such as Lincolnshire-based Bundle and Rust helping to spread the word.

Tony and Sally Gratwick’s idea for Bundle and Rust, which is based at the couple’s home in Barton upon Humber, grew out of a simple hobby. Sally, who suffers from psoriasis, went to a candle making demonstration at Barton Belles WI and was asked to make a few for friends and family.

Knowing that Tony had expressed an interest in making soap, Sally then arranged for them both to attend a course run by Melissa Coss (doyenne of artisan soapmaking) as a birthday treat for her husband, and says they came away “brimming with ideas”.

“After a few false starts, Tony’s soapmaking abilities improved,” says Sally, who also has a qualification in aromatherapy.

“Knowing the benefits of goat’s milk and because of my own skin condition, I’d been pestering him to make goat’s milk soap and at the first craft fairs we exhibited at, all our goat’s milk soap sold out, so we knew we were onto a winner.”

Natural ingredients
According to beauty experts, goat’s milk soap has several beneficial characteristics, being naturally high in saturated and unsaturated fats, which both increase lather and provide skin moisture and nourishment, which can help keep skin looking and feeling great.

“Our hand-made goat’s milk based soaps, which smell and feel amazing, are made in small batches using only natural ingredients. The soap is a natural exfoliant, leaving skin feeling soft and healthy. It has nourishing qualities and vitamins and does not dry out your skin,” explains Sally.

“We use fresh, unpasteurised goat’s milk from a prize-winning herd of Golden Guernsey goats, which live just five miles from us, using the ancient and traditional cold process method. We don’t add any colours or artificial fragrances and only use high quality essential oils.”

The unusual brand name, Bundle and Rust, is based on the couple’s nicknames: “As a redhead I’d acquired the nickname ‘Rusty’ and Tony had been known as ‘Bungle’, but we decided to adapt it slightly to Bundle,” explains Sally.

“Although it might not reflect what we produce, people said it sounded friendly and easy to remember so we went with it!”

By 2011 the business was in full swing, and Tony and Sally expanded the range adding shaving soaps, shampoo bars, as well as conditioner bars as a result of requests from customers. Wax melts also proved popular and the couple added diffusers two years ago, as well as travel sized candles. All products are still hand-made at home.

“We began making in the kitchen but very quickly outgrew the space so we got a garden shed for Tony to work in and I cornered the utility room. However, we soon outgrew that too so we bought a much bigger shed and are in the process of converting a building on our property for the new workshop, as we need to step up production to keep up with increased demand.”

The couple say they are often asked if they have their own herd of goats. “Unfortunately we don’t have the time, space or experience, but early on in our journey we were contacted by a gentleman in Goxhill who breeds Golden Guernsey goats, a rare breed of small dairy goats, and at certain times of the year, he has spare milk which he offers to us.

“Guernsey milk has a high fat content and that makes the soap extremely moisturising and gentle and doesn’t dry out the skin; it also helps soothe irritated and dry skin and is often used with great success by people suffering from eczema or psoriasis.

“The only downside is that it isn’t suitable for vegans, neither are our current beard balms because a small amount of beeswax is used. However, we’re planning to introduce some vegan skincare products later this year.

“We also source some of our milk from a farm in Middle Rasen and the honey we use in some of our products comes from the hives in our next door neighbour’s garden, where the bees forage in our pesticide-free garden, as well as from another friend in Middle Rasen, so our honey is all Lincolnshire sourced too.”

Expanding the range
Sally explains that product development takes up much of their time. “First, we decide what product we want to introduce then research formulations before starting to make and test. We then make and test some more and usually ask friends and family to try out new products for us before sending the recipes off to a certified chemist.

“Anything which you put on the skin must be tested and certified before it can be sold, from shampoos and soaps to creams and bath bombs. It’s an expensive necessity but to keep within the law it must be done and of course it’s necessary for the safety of our customers, most of whom are older people or under-30s, who are usually buying for children or babies with skin problems.

“It’s very refreshing when we hear about children and teenagers wanting our products because they recognise the damage to the planet caused by plastics and they want to use more natural products.”

The couple explain that right from the outset they knew they wanted to keep everything as natural as possible, with minimal packaging which was recyclable or reusable, also using natural ingredients such as oatmeal, seaweed or pumice powder for exfoliants.

“As a result we stick to the ‘cold process’ way of making soap, shampoo and conditioner bars and don’t use readymade ‘melt and pour’ soap bases. Everything, including the balms, is made from scratch, which means mixing liquids and melted solid oils at a certain temperature so that emulsification can occur.

“The mixture cools and is then mixed to thicken it before it’s poured into moulds. After two days the blocks of soap are removed from the moulds and cut into bars, then left in wire trays to cure.

“With the balms, oils and vegetable or nut butters are melted and left to cool before the essential oils are added along with vitamin E, poured into tins and left to solidify over the next two days.

“The manufacture of beard oils and diffusers is quick and simple: essential oils are added to carrier oils, and the only tricky bit with the candles is ensuring that the wick is central.”

Pampering products
Looking ahead Tony and Sally, who is currently nearing the end of a two-year organic skincare formulation course, say they hope that their bigger premises will give them the space to develop new products.

“At present our range consists of 20 soaps, eight shampoo bars, eight conditioner bars, eight beard oils, four shaving soaps, six candle, melt and diffuser fragrances and eight lip balms. However, we hope to be adding to our range with some body butters and creams, including some vegan products later this year.

“One thing which has become more apparent in the past few years is how younger men are taking much more care with their appearance, especially those with beards, and using beard balms or oils to condition their facial hair.

“Those who shave are returning to the ‘old fashioned’ way of shaving with shaving soap, brush and razor instead of using an electric razor.

“For a lot of men, pampering themselves a little has become much more mainstream. We like to think that the man using our products is an ethical gentleman who is taking care of himself and the planet at the same time.”

Bundle and Rust products sell through the business’ Etsy shop and website, and can also be found at Water’s Edge Country Park in Barton and Little Lavender Cottage on St Peter’s Avenue in Cleethorpes.

“We also attend many small and large events and country shows throughout the country (such as the Brocklesby and Revesby shows and Burghley Horse Trials) and we’re looking forward to getting back on the road and meeting our lovely customers, old and new.”