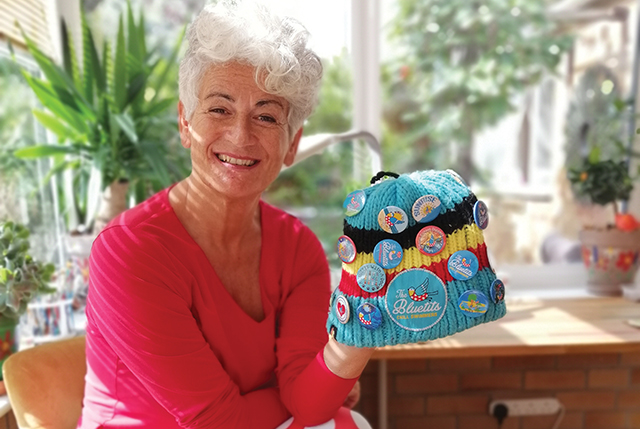 Ever thought of doing something wild and wacky, free and fun, invigorating and slightly insane? Well here is your opportunity. Throw your inhibitions to the wind and join the Boston Bluetits – if the name doesn’t inspire you, the members will, says Wendy Deamer.

“The Boston Bluetits are not ‘official’ in any way – they are a group of people who enjoy having fun and laughing. They are friendly, welcoming and liberating! Absolutely anyone can come along, any age, any gender, any size. The group’s belief in total inclusivity is very strong. They are totally relaxed and the only ‘organised’ part of the group is the posting
of ‘Anyone Fancy a Swim…?’ on their Facebook page.”

Every so often – just because they can – a bunch of ‘wild’ women lower themselves into the deep, dark waters around Boston and swim, swim, swim. No fees, no registration, no rules, no worries – just the feeling of complete freedom, relaxation and liberation – perfect. They have fun, make friends and feel fabulous.

The Boston Bluetits are part of the Bluetits Chill Swimmers, a group of cold water swimmers started by Sian Richardson in 2014 in Pembrokeshire. There are now Bluetits all over the world, swimming in lakes, rivers, seas – anywhere free and invigorating.

I was invited to meet up with the two ‘Mother Tits’ of the Boston group, Fran Mills and Nicola Housam, to find out more. Fran and Nicola are both full-time nurses, which gave a reassuring tone to this new and seemingly crazy activity… their approval somehow confirmed the benefits.

They started swimming together in the summer of 2020. Nicola is a member of the Bluetits in Plymouth and, inspired by their group, suggested to Fran they start their own group in Boston. They researched the Chillswimmers organisation (The Bluetits Chill Swimmers) and almost a year ago were set up as the administration side of the Boston Bluetits. They started officially with just four members in November 2020 and now have well over 300 members in Boston.

Chatting with Fran, Nicola and Hayley Bills who recently joined the group, the genuine affection and appreciation for the Bluetits was evident immediately. All members are passionate about the rewards and advantages of the group. It is free, no gym or pool fees, you can swim almost anywhere at anytime – no restriction of class times or waiting lists and it is great, great fun! New friendships and connections are made, combined with feelings of distraction, exhilaration and freedom.

Nicola, who is ‘approaching’ her 50s said: “The benefit on mental health is amazing, especially after the last 18 months. The freedom of swimming in a wide open space and interacting with others is perfect for people who have been in lockdown or have felt isolated.”

There are other health benefits too, as Hayley explained: “I have a skin condition which required phototherapy on a regular basis but since swimming my condition has improved greatly.”

People have also reported an improvement with joint pain and although research is still ongoing with this, Nicola explained: “Cold is an anti-inflammatory so there is very likely to be a connection [between] cold water swimming and a reduction in joint pain, and research has definitely shown this type of swimming can help with circulation.”

Menopause is another area where cold water swimming has proven to be beneficial. Evidence is building that it can help with headaches and mood swings and as Fran so aptly put it, “there are no hot flushes in cold water!”

The Boston Bluetits are not ‘official’ in any way – they are a group of people who enjoy having fun and laughing. They are friendly, welcoming and liberating! Absolutely anyone can come along, any age, any gender, any size. The group’s belief in total inclusivity is very strong. They are totally relaxed and the only ‘organised’ part of the group is the posting of ‘Anyone Fancy a Swim…?’ on their Facebook page – it really is as simple as that. With over 300 Boston members it is almost impossible for all members to swim together, so people tend to go out in individual groups with invitations on the Facebook page.

Although the Boston Bluetits are lucky to have two qualified nurses as their ‘Mother Tits’, this does not mean they are personally responsible for the swimmers’ safety. Nicola explained: “Each member takes responsibility for their own safety and making their own decisions – there is no allocated safety person.”

Members can advise one another and there are certain practices that would be generally known, such as never swimming alone. “Even if you swim alone in the water,” said Nicola, “you should always ensure you have a ‘spotter’ on the bank.”

The Boston Bluetits tend to swim mainly in the River Witham starting from the Boston Rowing Club, Langrick Bridge or Antons Gowt, where there are accessible ledges or steps for slow access. They also love to sea swim and recently had a swim and BBQ on Skegness beach.

The Bluetits are predominantly an adult group with very occasional family sessions during the summer. Families are made aware that it is entirely their own responsibility if they decide to bring children along. Many women use their ‘Swimble’ as a time to release their frustration, vent their anger and generally let off steam – so be aware!

Swimbles are not restricted to purely day times either; night swims are often part of their calendar, which of course opens up Swimbles to many people who may have to work around shifts, childcare and school runs. Night swims can be arranged around different Moons – Blue Moon, Harvest Moon, Strawberry Moon – they all create spectacular conditions for Bluetits to take the plunge. And with torches, whistles and glowsticks, there is no chance of getting lost!

The Bluetits were also on tour in May this year – waterfall dipping in the Yorkshire Dales, amazing. They had a guide who took them through the waterfalls and they camped nearby. Tours are something they are planning to do more of and members will be welcome to come along, although not obliged to. The antics of ‘Tits on Tour’ can only be imagined!

The group is only on Facebook. Fran did mention this is something they might look at in the future as not everyone is signed up to Facebook, but for now, Facebook is the information hub and it is where you can apply to join. They are not a commercial group or a business; there is no money involved, no fundraising. The group has grown purely by word of mouth and Facebook – they don’t need to advertise – 23 new people joined in the last week alone! There is merchandise available from the Bluetits Chill Swimmers site which includes badges and tow floats, costumes and towels but there are no rules on what you wear – whatever is comfortable for you.

If this free, easy and slightly mad idea of exercise and fitness sounds like fun to you, take a look at the Boston Bluetits website and Facebook page to find out more. They might seem like a “pack of potty people” but they are having fun, getting fit and laughing out loud. They also admit to copious amounts of cake too – so why wouldn’t you?