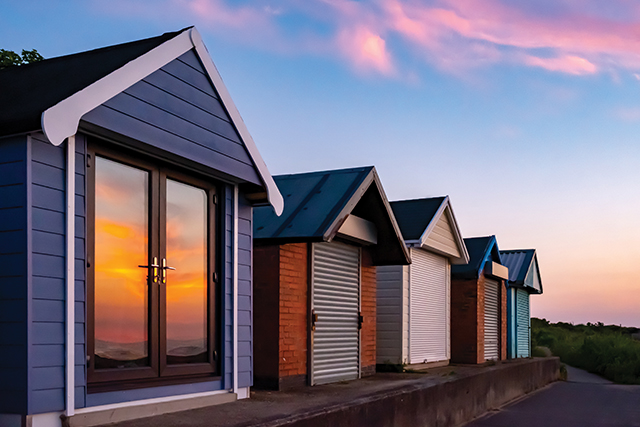 Ahead of the holiday season, Tim Ring joins his friend Joe Finch on the coast as he undertakes a stunning rebuild of a beach hut in Chapel St Leonards.

A year ago, in August 2020, I wrote an article about my friend Joe Finch, the Lincolnshire craftsman who builds shepherd’s huts and egg rotators. And what a year we have had since then. During the pandemic some major changes in behaviour have come about: working from home, staycations, and a desire by some to no longer live in cities. People have also started to think more of their own mental health and wellbeing and living a more outdoor life. All of this has sparked interest in country and coastal living and in particular, our beautiful Lincolnshire coastline.

One true sign you are on the coast of course is the sight of our colourful beach huts. Just as you cannot have a seaside without the sea or the beach, beach huts are every bit as associated with the best and most traditional of British coastal resorts. Memories of childhood summers at the seaside are of ice cream, paddling, sandcastles and beach huts. Historically, beach huts evolved from the huts on wheels that were pushed into the sea to allow prudish Victorians to change into bathing suits then step straight into the surf. As the Edwardian era arrived and those prudish attitudes waned, these mobile huts were left abandoned to the elements. The Joe Finches of the past saw an opportunity, took the wheels off, placed them on the promenade and the beach hut as we know it came into being.

As time moved on, more and more beach huts were provided by local councils and they fast became part of the coastal landscape. It is estimated there are around 20,000 beach huts along the British coastline. When my wife and I were moving up from London, over two years ago now, and we viewed a house in Mablethorpe, being able to see the promenade beach huts from an upstairs window was the deal clincher for us.

Moving on then to 2021. Joe was working on the inside of a beach hut at Chapel Point when Christine and John strolled by. As is tradition in this part of the coast, people cannot just pass by. A conversation must take place in all instances. To do otherwise would cause eyebrows to be raised and perhaps a shake of the head. Impressed with the work Joe was doing, the couple asked him to look at their own nearby beach hut, which they had enjoyed holidays in for many years. But it was showing its age and clearly needed to be demolished and built anew from the ground up.

A little about Joe’s history: he has been a messenger boy (at age 15 in central London), a black cab driver, bus driver, carpenter, a builder running his own company, and a youth football coach. Nearly 20 years ago, he and his wife Carole moved up to Chapel St Leonards where he was a postman until retiring a couple of years ago. There are not many in the village who do not know Joe and many have had him build an egg rotator, renew their fence, build them a summerhouse or decking and undertake many other projects where he does wonders with wood. I know how many paths he has crossed as, in any stroll through the village with him, most people wave in his direction and there are hoots from the passing traffic.

Joe has always believed in using local materials and local businesses. To start the process, he contacted a local firm who used a low loader and crane to pick the hut up from its base. Reversing the low loader along the coastal path to a position in front of the beach hut took levels of skill akin to taking a large container ship through the Suez Canal – although this was successful. Despite the low loader almost blocking the path, everyone taking a walk was happy to squeeze past, all with a smile and all with a keen curiosity about the events that were unfolding.

The crane made very short work of the demolition. With Joe and his mate Barry carefully attending to the hut, as the crane slowly lifted it, it started by design to fall apart and was easily stacked up on the back of the low loader. This left a nice patch of space for the new hut to be placed. In order to stop the land at the back of the hut encroaching over time, Joe and Barry constructed a proper, solid, concrete wall to hold the earth back. It was at this stage that Joe’s mind could turn to the new beach hut.

Joe sourced all the wood from a local company and began building the new beach hut almost in kit form on his own drive. The base was first, then the walls and then the roof, all carefully and methodically marked to ease building the hut on site. Once the pieces of the jigsaw were complete, the same low loader transported the pieces to the coastal path and they were lifted into place.

Over the coming weeks, Joe continued the construction. Progress was of considerable interest to the many passers-by. Many would stop for a chat and give their own feedback on how they thought the build was going. Whilst this would slow up progress a little, it did give an idea of how much of a community can be present in seaside towns and villages.

Sometimes a small crowd would gather to discuss and admire how the build was looking and engage in banter with Joe and Barry. Joe and Barry’s working relationship was often viewed as being similar to the Chuckle Brothers or Laurel Hardy, something like the end of the pier show, but mostly like that of a very old married couple. However, they achieve a lot and the construction was causing considerable local interest.

One of the trickiest jobs was the roof. Joe is a perfectionist and would never nail felt to the roof, which would be the easy thing to do. Joe used a large blowtorch, to torch on 4mm high performance felt. What made this tricky was the height Joe was working at and the lack of space available to work in together with using the flame and gas tank. The result though will resist all weathers.

The final stages involved cladding the outside in a beautiful blue Eurocell coastal cladding. Another feature that sets off the beach hut is the beautiful double-glazed doors, which were obtained from and fitted by Mitch of Impressions, a company based in Chapel St Leonards itself. Again, this fits in with Joe’s ethos of using local companies and this is a family-owned business which has been run by that family for over 40 years. It could not be more local unless it was working out of the next beach hut! They fit tailor made windows, doors and conservatories so they were an ideal choice for this out of the ordinary job. One of the final tasks before moving to the internal work was to fit the security shutter. An unfortunate necessity of modern life, the seaside can unfortunately attract a small minority bent on destruction.

To illustrate this article, I wanted to take photographs at every stage of construction. One image I really wanted to capture was the beach hut at sunrise. Joe and I walked down to the site at 4am one morning when a cloudless sky was predicted. We waited in silence watching the horizon. At 4.31am precisely the sun rose above the sea slowly, filling the sky with a beautiful red light. In front of both of us, a new day was born. Behind us a new beach hut had been born, rising like a phoenix from the flames of the old one. Lincolnshire life just cannot be beaten.