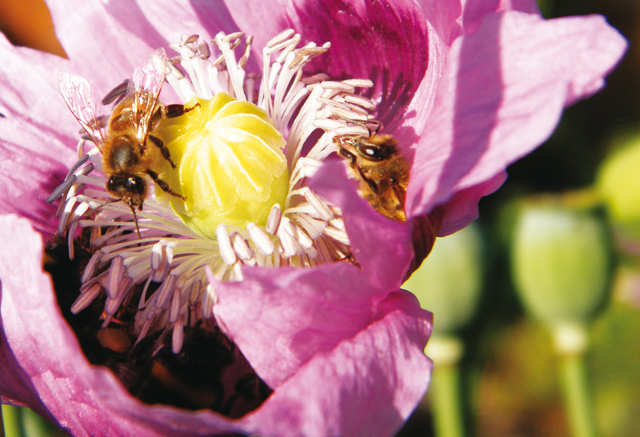 The busy bees of Rand

Their cedar beehives adorn the grounds of Buckingham Palace, Clarence House, the Eden Project, the Lost Gardens of Heligan and, with increasing frequency, rooftops and allotments in our biggest cities.
Family business E H Thorne (Beehives) Ltd, of Rand, Lincolnshire, has been manufacturing beekeeping equipment for almost 100 years and is the largest UK business of its kind, with clients all over the world.

“It all started by chance. My grandfather, Edgar Henry Thorne, was a joiner on the Panton Hall estate near Lincoln and was asked to make a beehive by a local schoolmaster,” explained Thorne’s chairwoman, Gill Smith. “He went on to set up a small business making hives, before the Second World War, with just one lad to help him, and we’ve been going ever since.”

Gill’s father, Leslie joined the firm on his return from the war and pushed it forward by expanding into the building trade, the profits of which subsidised the machinery for the beekeeping equipment.

With her husband, Paul at the helm as managing director and daughter, Rebecca working alongside them, the firm now employs 100 staff on a beautiful rural thirty-two-acre business park.

The company not only hand makes a range of beehives and flat-pack hives but they also provide all the other materials and paraphernalia that go along with keeping bees: protective clothing; smokers; honey extractors; reference books, plus candles and candle making kits.

With the surge of interest in beekeeping which has taken place in recent years, regular tours of the firm’s site and courses are also part of Thorne’s work; honey bees and their ecological importance are seldom out of the news nowadays. But it has not always been that way.

“In my grandfather’s day lots of people kept bees in the same way they had chickens and a goat, to provide food and income for the family. There were beehives in many gardens and people made their own honey,” said Gill.

“But for quite a while beekeepers became thought of as rather eccentric and weird. Luckily there has been a big sea change in attitude. People are far more aware of the important ecological role that honey bees play and are now taking up beekeeping for environmental reasons rather than just a hobby.”

The appearance of a new threat to bees has been largely responsible for the recent focus on beekeeping. In 2006-2007 Colony Collapse Disorder (CCD), the phenomenon in which whole colonies of bees suddenly die off, was sweeping the US and parts of Europe and was soon to be seen in Britain. At the same time a very harsh winter, which resulted in forty per cent of British beehive colonies being lost, caused huge alarm in the beekeeping world.

Gill explained: “The British Beekeepers Association helped bring the crisis to the attention of the media and the general public and thousands of beekeepers joined forces and marched on Parliament. It really made people start to appreciate how crucial bees are in terms of pollination of crops and plants in general and how the bees’ plight is our plight.”

So how important are honey bees in the great scheme of things? One statistic often bandied about is that bees are responsible for one in three mouthfuls of food we eat. As most people are now aware, honey bees don’t just produce honey; they are one of the main pollinators of agricultural and horticultural crops throughout the world, resulting in billions of tons of produce. The critical importance of honey bees and bee health in the UK is such that the insects have their own government department run by Defra – the National Bee Unit.

Bee experts around the world are still trying to establish exactly what lies behind CCD which has been blamed for beekeepers losing thirty to ninety per cent of their bees in one season. Theories include the varroa mite, viruses, pesticides, mobile phone signals and genetically modified crops – but, to date, no single cause, or combination of causes, has been identified.

The disorder manifests itself when worker bees suddenly disappear leaving the queen and young in a hive with healthy stores of honey and pollen. Without the workers the queen and hive cannot survive and the colony soon dies out. One key sign of CCD is a lack of dead bees, while disease or acute poisoning of a colony, by overexposure to a chemical for example, result in piles of dead bees in and around the hive. The lack of bee bodies has led some experts to believe that the disorder causes bees to become disorientated and unable to navigate their way back to the hive.

And then there is the weather.

Gill said: “The weather has a huge impact. Bees don’t like wet and windy weather. The perfect conditions would be warm days and wet nights but obviously that doesn’t happen very often. The very wet April last year was very hard for beekeepers, as the bees were staying in their hives and eating up their stocks of honey and pollen and multiplying like mad. Then with the first whiff of good weather a lot of them swarmed and were off.”

Swarming often occurs if the number of bees in a hive increases to a point where the individual bees cannot detect the pheromones of the queen; many of the bees ‘abscond’, taking the queen with them to find a new, bigger home. The original hive will carry on with a small number of bees along with a new queen that they have been nurturing in preparation.

Despite all the inherent challenges associated with keeping bees, including the current financial crisis which has hit many beekeepers, Thorne’s are keeping very busy.

Gill said: “The growing number of urban beekeepers is very noticeable, which is a good thing, especially if they go into it with proper advice and training. There are also a lot more allotment societies, parish councils, church associations and community groups coming to us. The Co-op has put a lot of money into beekeeping too.

“When people take up beekeeping a lot of them comment on how good it is at combating stress. Coming home from a busy day at work and watching the comings and goings around a hive is very therapeutic.”

Further afield, Thorne’s are also involved with Beekeeping for Development; Paul Smith is the charity’s chairman. The organisation encourages beekeeping in developing countries, not only to help provide a sustainable living for people in poverty, through producing and selling honey, but to increase pollination of crops and aid biodiversity as well. They work throughout Africa and Asia and provide a global information service. Quite aptly, one of the organisation’s patrons is the musician and activist, Sting.

During our conversation, Gill mentioned an old beekeeping adage: ‘Beekeepers never die, they just buzz off’. Thorne’s are firmly proving that they do neither.