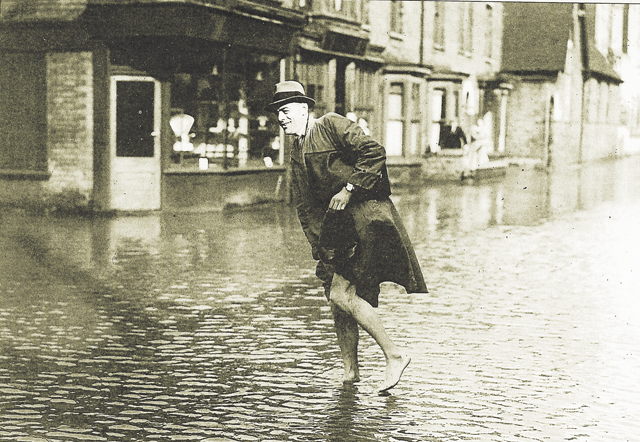 The winter of 1946/47 was one of the coldest in living memory with long periods of freezing temperatures.
This was accompanied by the worst snowfall for seventy years. Then in the second half of March came a rapid thaw and widespread flooding, which brought chaos to Lincolnshire due to overflowing rivers, dykes and ditches.

There were distressing scenes in several parts of Lincoln as water swept into houses, damaging carpets, lino and furniture. Many residents found their cookers and fireplaces under water and they moved upstairs to become bedroom dwellers. In Lincoln alone, water got into 3,000 homes and one-sixth of the city was under water.

In many streets the water was three feet deep. The streets around Sincil Bank were some of the worst affected, as water from Sincil drain came over. Residents in Weir Street and Webb Street were said to be the first to abandon their downstairs rooms, followed by Alfred Street and Foster Street. Streets to the south of Carholme Road were hit hard. Those who did not wish to live upstairs were ferried to higher ground by boat. The boat volunteers also did some shopping for the bedroom dwellers and handed the supplies to them through an upstairs window, by standing up in the boats.

Swans swam up and down many streets. There were even reports of pigs and other animals from the allotments floating along the streets. Water from the Fossdyke and Brayford Pool flooded railway tracks and trains had to be diverted. Water at Stamp End lock was nearly six feet above normal level. Many roads were closed.

Several factories were forced to shut including Ruston-Bucyrus, Dawson’s, Foster’s and Jackson’s Laundry. Farmers suffered particularly badly with thousands of acres under water. Cows on the point of calving were in a bad state. Sowing was delayed and there was a serious shortage of parts for farm machinery.

Emergency centres were opened for people whose homes were no longer habitable and who could not go to relatives. Mobile canteens were established and drinking water was delivered by boat. The Co-op Dairy on Boultham Park Road was surrounded by water but it was their proud boast that they never missed a delivery, even though some were made by boat.

The allotments at Skewbridge were flooded and a large number of chickens at risk of drowning. Some enthusiastic allotment holders decided to launch a rescue attempt using an improvised boat made from whatever materials were available. The rescue was successful and several boatloads of chickens were taken to higher, safer ground. The problem came with the realisation that, in the cold light of day, they could not tell which chickens belonged to whom and returning each to its rightful owner proved difficult. There were even claims that some people ended up with chickens who did not previously have any.

Gainsborough was badly hit by the floods. The hole punched through the Trent bank downriver of Morton was seventy feet across. The north bank of the Welland burst its banks and flooded Crowland and the surrounding fens. The army was brought in to help around the county. I was five years old in 1947 and lived in Kirkby Street in Lincoln. I was in my first year at St Peter at Gowts Infants School. This might take a bit of believing now, but all of us little children were taken to school by rowing boat. The boat picked me up outside our house, we went up Kirkby Street, along Sincil Bank and half way up Scorer Street, where we disembarked at an informal landing stage. From there we walked to school. I somehow don’t see that happening today.