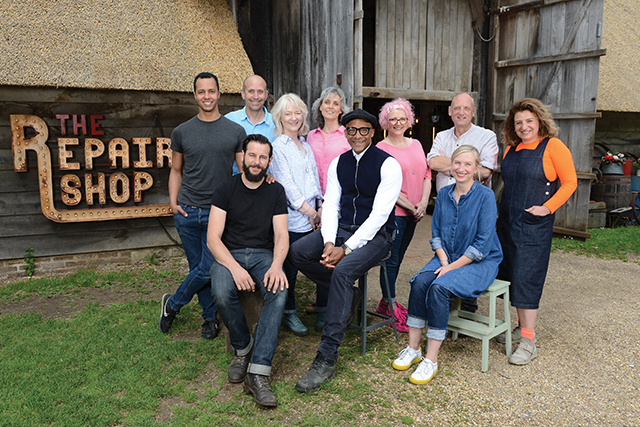 The herald angels ‘zing’ once more

Four wooden angels from a Lincolnshire church have been restored to their former glory thanks to an appearance on the BBC primetime show The Repair Shop. Kate Chapman tells their story.

The quartet of wooden carvings have been on display in St Gilbert and St Hugh’s Church, in Gosberton Clough, near Spalding, since 1915 when they were made by Belgian woodcarvers taking refuge in Spalding during the First World War. They were made in memory of the church’s founder, vicar Edgar Torr Hudson, but over the years have been repainted and suffered various damage and breaks.

It was parishioner Jane Tidswell, wife of churchwarden Brian and a fan of The Repair Shop, who came up with the idea to approach the programme’s makers to see if they would consider restoring the angels.
The show, which is presented by Jay Blades, agreed to take the project on and church members were delighted with the results, which showed that underneath the paint the carvings were coated in a delicate gold leaf.

The restoration was part of an episode aired back in April and is also set to feature in a forthcoming new book accompanying the show.

“The church had recently been decorated, we have a sub-committee which does some fundraising to keep the fabric in good order, and everything inside had been scrubbed and polished and cleaned,” explains Jane, “while these four angels just looked very sorry for themselves – they’d obviously been repainted at some point, they had broken wings and one had a missing hand.

“I love watching The Repair Shop – you can see the country’s best craftsmen repair things that would normally just be thrown away, so I decided to see if they would restore our angels.

“That was back in February last year, and they replied to say they were interested but needed to know a lot more about them, so I set about finding out as much as I possibly could. It was difficult as there were no signatures on the carvings.

“Despite spending hours and hours online and enlisting the help of others I didn’t really turn up much, so I was convinced that was it, but they got back in touch in the summer and agreed to feature them – we were thrilled with the finished results!”

St Gilbert and St Hugh’s Church was designed by William Bucknall and Sir John Ninian Comper and built in 1902/3. Its design is quite extraordinary and undoubtedly influenced by the Arts and Crafts movement, which was popular at the time. Comper is regarded as one of the last of the great Gothic Revival architects, designing churches and stained-glass windows, and the Gosberton Clough building features one of his signature strawberry designs.

A plaque in the church – telling how Belgian refugees had made the angels – gave Jane her starting point for her research. She contacted museums online, tried to locate Edgar Torr Hudson’s living descendants and received help from a member of Spalding Gentlemen’s Society, who was also researching Belgian woodcarvers.

Even though there was little information available Jane was delighted the show’s producers eventually agreed to restore the angels.

“It was quite a surprise, but we were thrilled – Brian and fellow churchwarden David Dickinson had to take them down to Chichester so that they could take part in some initial filming and then they had to leave them behind,” recalls Jane. “We had absolutely no idea what they were going to do to them and just had to leave them there and forget all about them!”

The Repair Shop’s antique furniture restorer Will Kirk worked his magic and Jane was contacted in late autumn to say the pieces were ready for collection. However, due to logistical issues it was agreed the crew would travel to Gosberton Clough to return the artefacts and complete filming at the church instead.

“It was a lovely bright November day – and they stayed with us all day filming until about 3pm, for what made a few minutes in the final edited programme,” says Jane.

“What Will had done to the angels was amazing; he had used a cotton bud and acetate to remove all the paint, it was meticulous work, and what he found underneath was that they were covered in gold leaf.

“It just completely blew us away – he’d also mended the broken wing and carved a little hand to replace the missing one. They looked stunning.”

Once the angels were back in pride of place in the church, there was a long wait until the episode was aired on 15th April.

“Unfortunately, due to coronavirus we couldn’t all get together to watch it as we would have done normally,” says Jane. “Brian and I sat here together, and the phone just didn’t stop ringing all the way through the programme as people were wondering whether we knew it was on! In the end we decided to just let it ring so that we didn’t miss anything!

“It’s been lovely though and an enormous boost for the church.

“What we really want to do now is have an open day, where people who are interested and want to find out more about the angels and the church can come along and see them for themselves, but unfortunately Covid has put paid to that for the time being, but that’s definitely something we’d like to do once we’re able.”

And now they’re back where they belong – albeit in a more prominent spot at the front of the church, just behind the altar – the angels also make an appearance in a new book accompanying the show – The Repair Shop: Tales from the Workshop of Dreams. They’ve also inspired an entry into the Song for Lincolnshire competition.

It is still hoped more can be discovered about them too, as there is a possibility their importance could be greater than originally realised.

Jane added: “There is a suggestion that they have been carved in the style of Comper and if that’s found to be the case then they are even more important than we first thought.”

The new series of The Repair Shop is on BBC One and on the BBC iPlayer.