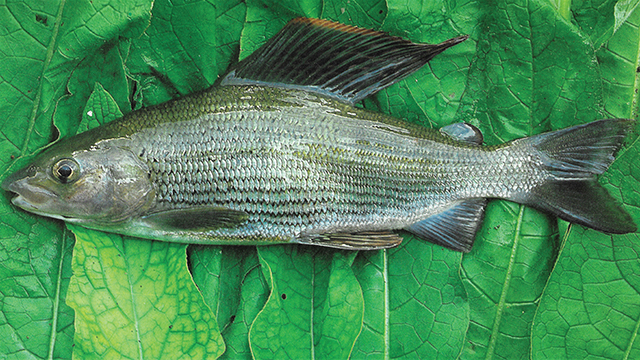 The European grayling provides good sport for the fly angler during the winter months. Here in Lincolnshire some exciting and challenging fly fishing can be had trying to outwit the ‘Lady of the Stream’.

A few years ago in my role as a river bailiff for Lincoln and District Angling Association, I was checking an angler’s membership at Meadow Lane bridge, near North Hykeham as it goes over the Witham. He told me he had caught four grayling whilst trotting for roach.

There are several species of grayling worldwide but here in the UK it is the European grayling, Thymallus thymallus, that is present. The Latin name for the grayling relates to the scent that the fish gives off. The smell is not a fishy one but rather similar to the smell of wild thyme. Some anglers say it is more of a cucumber smell.

The grayling spawns in the spring. A male will hover around a female trying to get her attention and eventually the chosen male gets to fertilise the eggs. The female then tends to go off to find another male and get more eggs fertilised. The female grayling can do this several times, so the father of the brood could easily be several different male fish.

The main diet of the grayling is freshwater shrimp (Gammarus) which is readily available, easy for them to catch and eat and also very nutritious. Grayling find and eat most of their food subsurface, so fishing a subsurface fly is one of the best ways to deceive a fish.

The Great Eau holds grayling. The best fishing is controlled by Aby Fly Fishers and you have to be a member to fish – day tickets are not issued. However, part of the Eau near Withern can be fished on a day ticket. Tickets can be obtained from Withern Mill.

The upper Witham also now produces superb grayling fishing. Here the fishing is controlled by Grantham Fly Fishers and is strictly private, you must be a member to fish.

The Great Eau and the Upper Witham are only narrow rivers and my choice of tackle is to use one of my own hand-built split bamboo rods from 7ft to 8ft length, taking a weight 3 or 4 double taper floating line with a 9ft tapered leader.

The choice of fly can be many. I like to use shrimp patterns, my favourite being the late Richard Walker’s dressing, so simple yet very deadly. The pattern is tied on a size 10 to 14 hook, and lead is lashed to the top of the hook shank to form a hump. This is covered in varnish to secure it. Over this lead is wound a body material of seal’s fur or wool in an olive colour. If wool is used, gently rough it up with the dubbing needle.

Over the body a ginger cock hackle is wound palmer style along the body, tied off and a neat head formed. The hackle is then clipped short on its back to remove the splayed out hackle fibres. Coats of varnish are now added to where the hackles were clipped, until a smooth shell-like back is achieved. The beauty about this fly is that it sinks fast and with the lead on the back, it will fish point up and can be bounced along the stream bed without getting fouled up.

To fish the shrimp it is cast upstream and allowed to drift back with the current. For bite detection, keep your eye on the leader where it enters the water. If it stops in the current, jerks forward or sideways, you must lift the rod instantly to make contact. Another method to use is the ‘Clink and Dink’.

A dry fly, usually a parachute, with an upright post that can easily be seen, is tied to the point of the leader, then a length of nylon of 2lb breaking strain is tied to the bend of the dry fly. At the end of this is tied your subsurface imitation. The length of this line is dependent on how deep you want to fish the imitation. The flies are cast upstream as with the shrimp method. If a grayling were to take the subsurface imitation you would get an indication from the floating fly. This fly could also be taken. My best grayling (4lb), taken on the Welsh Dee, was caught using Clink and Dink.

If you are a river fly angler, I highly recommend you get yourself out there and try for winter grayling on the fly. I offer guided days out for anyone who would like to try. All tackle can be supplied. Please get in touch through Lincolnshire Life or my website.