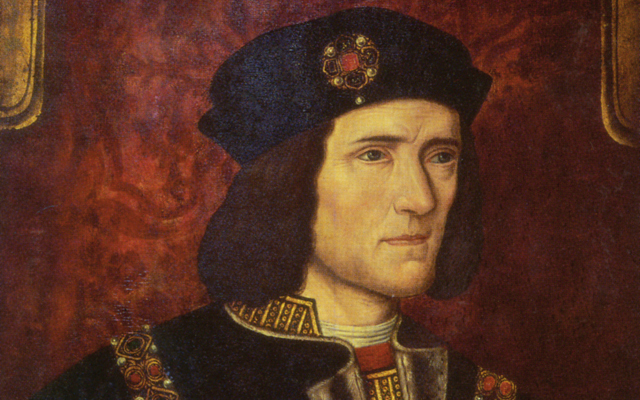 The last Plantagenet – King of England comes to rest

This author has always been fascinated by the enigmatic figure of Richard III. Following the recent discovery of bodily remains in Leicester and confirmation ‘beyond reasonable doubt’ that these are indeed those of the last Plantagenet King of England, my lifelong fascination now seems to be shared by a good few other people.
There are parts of the country which will forever be associated with Richard, principally Yorkshire where he spent much of his life and was probably at his happiest; Northamptonshire where he was born and Leicestershire where he died and lay buried and forgotten, until recently.

One county that played a less frequent and less celebrated, but nonetheless important, part in his story is Lincolnshire. The story here focuses on Lincoln, but particularly the Angel & Royal Hotel in Grantham.

Situated in the centre of this historic market town, the hotel dates back to circa 1203 and is the archetypal old coaching inn. The Angel & Royal’s website proudly proclaims that some have said that the hotel, ‘has more historical interest than many of our stately homes in the United Kingdom’.

Widely regarded today as the oldest surviving English inn, with a main façade dating back some 600 years, it’s known that the hotel had been a hostelry for a couple of hundred years even prior to this. Originally built as a hostel for the chivalrous ‘Brotherhood of the Knights Templar’, the extravagantly carved building then caught the fancy of King John, who decided it would be suitable as a stopping-off point for his travelling court in 1213, just two years before the signing of Magna Carta.

There is still an angel displayed on the inn sign at the front of the hotel today, the angel signifying the early and strong connection between religious houses and hostelries that were set up for the benefit of travellers, many of them making their way to religious observances. The inn must have prospered, as it was extended in both the fourteenth and fifteenth centuries.

The hotel was honoured with many more royal visits, the next apparently by Edward III and his Queen Philippa in the fourteenth century. Edward III is recalled as one of our foremost warrior kings, the architect of a new ‘way of war’ involving massed ranks of English bowmen, which would reap such dividends during the Hundred Years’ War with the French. Over the main archway there is a gold emblematic angel holding the King’s crown, placed there at the time of this royal visit (although some sources claim it was placed there in honour of the next royal visitor and the subject of this article).

My interest has always been in that next royal visitor, Richard III, who visited the Angel & Royal in the autumn of 1483, when he was on his royal progress around England following his accession to the throne. Having usurped the throne in April 1483 following the premature death of his big brother, Edward IV, Richard had shown himself to his people on a procession to York. He was now on the return leg of his itinerary, arriving in Grantham from Lincoln, via Nottingham.

Richard’s reputation has been besmirched, of course, for events that he may or may not have been responsible for that summer, namely the disappearance of the two Princes in the Tower, the sons of Edward IV, the eldest of whom, another Edward, should have been king. Doubts about the legitimacy of the princes led to their claim being passed over, however, with their uncle, Richard, Duke of Gloucester, being proclaimed king in their place.

Richard’s burial place may be confirmed, but his reputation remains a matter of acute controversy. Was he the evil uncle of Shakespearean prose who had his two young nephews ‘done away with’, or was he a good king, who has had his reputation dragged through the mire by the Tudors who supplanted him? We will probably never know.

What we do know is that Henry Stafford, Duke of Buckingham, who had been instrumental in helping to put Richard on the throne and had been well rewarded, now turned against the King for some unknown reason. Whether this switching of allegiance had anything to do with the fate of the princes, again we cannot know.

Richard had been the beneficiary of a ‘reception which the Bishop’s servants had provided at Lincoln for the royal entourage’ (Richard the Third, 1955) when he first got wind of a rebellion against him, receiving word from his loyal retainer John Howard, Duke of Norfolk. It was here that Richard was made aware of a plot against his life and reign by the man who’d been his closest confidante and supporter, the Duke of Buckingham. From admiring the splendour of Lincoln Cathedral, Richard was now planning the moves that would keep his realm secure.

Richard urgently dispatched a letter to his Chancellor, John Russell, the self-same Bishop of Lincoln, demanding that the Great Seal be sent to him so that he could proclaim Buckingham a traitor. The tone of Richard’s letter to Chancellor Russell sent from Lincoln on 12th October 1483 suggests that the news of Buckingham’s defection came as an immense shock and one that made him bitterly angry. He spoke of, ‘the malice of him that had a best cause to be true, the most untrue creature living.’ (Richard III, 1981) Richard would be heading south and demanded that the Great Seal of England meet him at Grantham, where he was now headed.

Richard remained in Lincoln, though, for five or six days before beginning his journey south. He needed to gather intelligence and prepare for the royal muster of his troops before setting off, as he had been caught on the hop with no armed forces in attendance. An urgent call to arms went out immediately with orders to gather in Leicester on 20th or 21st October.

Richard paused on his journey south at Grantham on 19th October. The King held court apparently in the ‘Chambre de Roi’ at the Angel & Royal, or the King’s Room Restaurant as it’s known today. ‘Robert Blackwell, one of the clerks of the chancellery, delivered the Great Seal into the hands of the King at the Angel Inn in Grantham.’ (Richard the Third, 1955)

With the Great Seal safely in his possession, a death warrant was duly sealed and Richard set off for Leicester via Melton Mowbray. Buckingham’s rebellion collapsed as it happened, submerged in extreme wet weather conditions, the likes of which we’re getting used to today. He was duly packed off to Salisbury marketplace, where he found himself deficient of one head on 2nd November.

The original letter that Richard sent to Russell is now in the Public Records Office in London, but copies are on display in the hotel, adjacent to the King’s Room Restaurant and the Richard III lounge. Richard’s own autograph footnote, denouncing the treachery of his onetime friend can be clearly seen in the margin of the document, as Richard ‘let rip’. Appropriately, a portrait of the King takes pride of place in the hotel.

Richard was safe on this throne for a little while longer, but in the event, for not even two years, for he would meet his end at the Battle of Bosworth Field in Leicestershire, on 22nd August 1485.

The King’s Room Restaurant still looks much as it would have done when Richard acted upon the awful news of Buckingham’s treachery with a single-minded determination. The stone walls and open fire remain and in one corner there is a small spiral staircase that presumably led to some kind of lookout, so that royal dignitaries could be espied before they descended on the inn. The room also possesses three oriel windows, each adorned with elaborate stone carving. One beautiful oriel window can be seen today above the arch at the front of the hotel.

Richard III’s visit was by no means the end of royal patronage of the hotel, as Charles I stayed here, as well as his nemesis, Oliver Cromwell (obviously not at the same time). The inn achieved huge popularity due to its position on the Great North Road during the coaching era and was also visited by George IV. It was only in the 1920s that the establishment finally dispensed with the word ‘inn’ and took on its modern name of the Angel & Royal Hotel.

It was a few years ago that my wife and I visited Lincolnshire and climbed Steep Hill to gaze awestruck at Lincoln Cathedral, as Richard and his young son quite likely did themselves in October 1483. On the last day of our trip, a Friday, we started heading south, stopping at Grantham for morning coffee on our way. Of course, there was only one place to partake on a wet morn and that was the Angel & Royal Hotel. In my lifetime’s quest to visit all of the places that featured in his life, this was ‘another little bit of Richard III’ and how satisfying that felt.