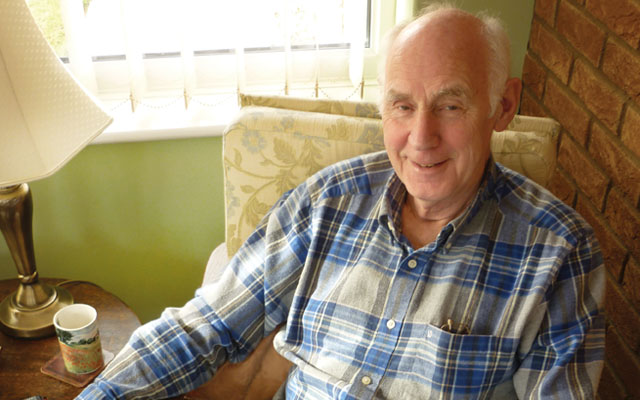 The lighter side of Dark

Graham Dark, former Head of Security at the Palace of Westminster, spoke to Jean Rush about his career and his current activities with the Fifty Plus Club in Spalding
When Graham Dark retired from the Metropolitan Police he didn’t opt for a quiet life. A Spalding resident for the past twenty-two years, Graham’s career began as a constable in the Met; he retired as a Chief Superintendent, having commuted to London from Spalding for the last two years of his career. Now he is busier than ever, not only as a district and county councillor, but as chairman of the Fifty Plus Sports and Social club, based at the Castle Sports Complex in Spalding. Very much a hands-on chairman, Graham organises a range of events throughout the year, from theatre visits and cruises to hotel breaks. His organising skills are well honed, after many years attached to the Met’s Royalty and Diplomatic Protection Department, responsible for ensuring the safety of the Royal Family and Members of Parliament. “I was on duty in and around Buckingham Palace, and as a PC often stood on the patio outside the Queen’s bedroom all night long,” he said.

In his early days, Graham was stationed at Cannon Row, only 100 yards from the Houses of Parliament. He was sometimes seen as the lone armed police officer guarding the door of No 10 Downing Street, and one memorable duty of that period was at the lying in state of Sir Winston Churchill. The guards around the catafalque stood with their heads bowed and in front of them stood policemen protecting them from any possible incidents as the crowds filed by. “They weren’t allowed to move,” said Graham, “but we were! Thank goodness there wasn’t any trouble.”

After two years’ probation, all officers were posted to a royal palace: “I was posted to York House, home of the Duke and Duchess of Gloucester. The great thing there was to be friendly with the cook! It was very much like Downton Abbey”. He also spent time posted in Bethnal Green, where he came across a number of local villains including the Kray twins! He continues, “On promotion to Inspector, I arrived at Marylebone Police Station at the time the IRA campaign had just started, and from then on with other operational officers I was heavily involved in counter-terrorism.”

As a Chief Inspector, Graham was posted to Paddington Green: “I was operations, traffic, vice and community liaison officer for that part of London for several years, and on operational aid to incidents such as the Brixton riots. My later bank holidays were spent policing the Notting Hill Carnival. I was also at St Mary’s Hospital when Prince William was born, on security duty outside the delivery room.”

While at Paddington Green, Graham was first on the scene at the bombing of the bandsmen in Regents Park: “We were responding to an earlier explosion and were within yards when the bandstand blew up killing seven bandsmen. An hour later, the Salvation Army arrived giving welcome moral support and cups of tea and coffee.”

Promoted to Superintendent, Graham had an office in Buckingham Palace for some time while the security in the Palace was reviewed, following the incident when a man climbed over the wall and made his way into the Queen’s bedroom. Graham was on security duty many times at the State Opening of Parliament, and on one occasion had to go to the Tower of London and collect the Crown Jewels to transport them to Buckingham Palace, the day before the State Opening.

He said: “I was promoted to Chief Superintendent and transferred to Wembley, as there was serious concern about public safety at the old Wembley Stadium. For four and a half years I was responsible for policing at every event at Wembley Stadium, which included all the security planning for Live Aid and other concerts. My final posting before retirement was to overhaul all Houses of Parliament security. The day I took over my office in the House of Lords was the day that Ian Gow was killed by a car bomb. I gave hundreds of security briefings to Members of Parliament and their families and brought in a bomb squad team which worked with me in and around the Palace of Westminster. At one time we located an armed device in Parliament Street.”

I asked Graham how, after such an exciting career, he came to be involved in the Fifty Plus Club.

“I started bowling and was a member of the Club. When the man who was running it resigned, I was asked to take over. I had been organising events all my life. In the police we found that if we had good family days and social events morale was high. I had run several trips to Warners Hotels for the indoor bowls club, and that became a regular event for the Fifty Plus Club, going on for the past fourteen years. The most I have organised so far is thirty events in a year,” he said.

Since Graham took over, the club membership has jumped from about seventy to 750, all by word of mouth, and the annual subscription remains at only £1 a year. Activities in the Castle Sports complex include bowls, badminton, swimming, keep fit, and the gym, all of which can be enjoyed by members on a Friday morning for a small fee. “We have referrals from the Citizens Advice Bureau, GPs, Age Concern, and from bereavement clubs. We also ensure newcomers are made welcome on a Friday morning. There’s plenty of support for members who aren’t well and voluntary work done by members for their favourite charities,” added Graham.

Not content with his work for the Fifty Plus Club and as an independent councillor, in February Graham organised another concert by the RAF Swing Wing Band at the South Holland Centre, Spalding, for the Help for Heroes charity. In 2011 £5,208 was raised, and this year another £6,040. The concert included guest singer Matthew Ford, one of the stars of last year’s Hollywood Musicals night at the Albert Hall Proms, and was a huge success.

Band master, Dave Jones said: “We had a wonderful reception in Spalding and Graham is a great organiser. We are hoping to come again next year, perhaps for two nights, one of them being a Valentine’s Day celebration.” Look out for that, because all tickets for this year’s event sold out within a few days.