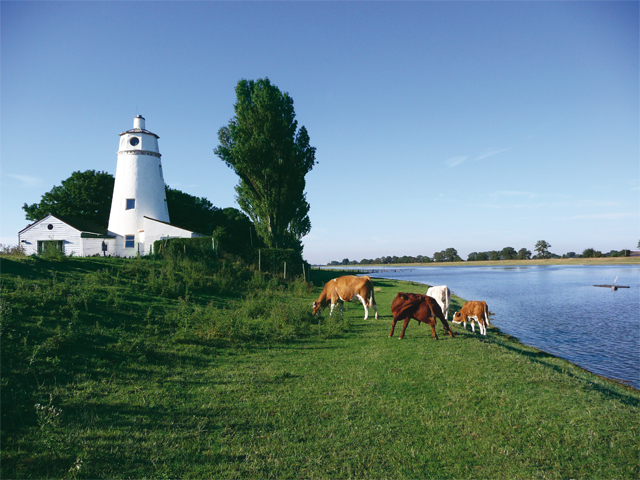 The lighthouse at Sutton Bridge

Regarded as one of the most important buildings in terms of global conservation, the Sir Peter Scott Lighthouse has new owners, who are working to make it more accessible to the public, so the legacy of its extraordinary namesake can live on.
The historic building, which lies on the banks of the River Nene surrounded by some of Lincolnshire’s most spectacular scenery, was bought by Kent couple Doug and Sue Hilton last year.

After spotting the lighthouse for sale in a magazine, they were thrilled to discover it was still available and arranged a viewing straight away. They fell in love then and there and were delighted when their offer to buy it was accepted. A few months on and they have already drawn up ambitious plans for a visitor centre, cafeteria and museum which, if all goes to plan, could open next year.

The Hiltons, who already look after the sixty-five acre Buckland Lake Reserve in Kent, through their Snowgoose Wildlife Trust, say the lighthouse is the “most important building in global conservation history” and are very excited to be playing such a big part in securing its future for many years to come.

The East Bank Lighthouse is one of a pair, built at the mouth of the river in around 1830, to commemorate the draining of the fens and was designed by Waterloo Bridge architect John Rennie.

During the 1930s the lighthouse was surrounded by tides on three sides, making it the perfect place to keep wildfowl. It was this landscape which drew Sir Peter Scott to the Fens and it became the place where he lived and worked, painting and studying the wildlife around him.

Mr Hilton said: “This lighthouse is the most important building in conservation history – there were conservationists before Peter Scott, but no conservationist ever operated outside their own narrow fields.

“This is where global conservation started.

“Scott was a wildfowler, that’s why he took the lighthouse – he started to collect geese and ducks from around the world and built up one of the biggest collections in the world.”

Recognised as the most influential conservationist of the twentieth century, there were many other strings to Scott’s bow. Olympic yachtsman, television presenter, gliding champion, skilled ice-skater, painter, naturalist and author were among his many talents. He was also holder of the Distinguished Service Cross for Gallantry and the founder of the World Wildlife Fund.

Scott was also the first conservationist to be knighted, when he was awarded the honour in 1973. The son of Robert Falcon Scott (or ‘Scott of the Antarctic’ as he is better known), Scott was always destined for great things.

He was passionate about nature and conservation and was deeply concerned about the planet’s abilities to withstand the demands of its human inhabitants on it.

He came to Sutton Bridge in 1933 and rented the disused lighthouse on the East Bank from the Nene Catchment Board, paying five pounds per year. It would be his home until the outbreak of the Second World War in 1939. The five-storey building, including basement, has four bedrooms, two bathrooms, a kitchen and studio, the latter of which was added by Scott.

From the lighthouse Scott would watch the wading birds, and it was these that inspired his first book, ‘Morning Flight’, which contains many paintings completed during his time at Sutton Bridge.

With the money he made through an art exhibition in London, Scott added a single-storey extension to the lighthouse to use as a studio.

By 1938 he had built up one of the biggest collections of wildfowl – around 350 birds in all, including numerous breeds of duck and up to twenty-five different types of geese. Today the Hiltons have around thirty wild geese in the reserves at the lighthouse, established by the previous owner Commander David Joel. And from the windows they can often see barnacle geese, pink-footed geese and snow geese.

It was this breed, which inspired the famous story – ‘The Snow Goose’ by Paul Gallico – which is based on Scott and his time at the lighthouse. Later he would go on to illustrate a version of the book.

Since buying the lighthouse Mr and Mrs Hilton have also been fortunate enough to come across a number of items of memorabilia linked to Scott, including his 1938 Olympic sailing medal, his gliding medals, a Royal Yacht Squadron Club cap worn by him and the set of poker dice he used to play a game with composer Strauss.

It is these items along with others which the couple will show off to members of the public in the museum they are hoping to create.

Mr Hilton said: “It’s been wonderful, all these pieces, they all have their own little story or anecdote to tell. He had so many vested interests and each is such a little gem – every time you’re touching a piece of history. It’s quite amazing, he was quite a man, and we’re only at the beginning really. We’re looking forward to hearing more stories about him.

“This lighthouse is such a special place.”

The couple are also hoping to put up a display of prints, taken from some of Scott’s wildlife paintings. Although none are up yet, one little marker from the artist remains: an engraving of some flying geese on a lintel can be seen in the living room, signed by the man himself.

Scott married photographer Philippa, with whom he had three children and eight grandchildren. He passed away in 1989 aged seventy-nine.

It’s easy to see why, in such a wonderful setting, Scott’s love affair with wildfowl began on the banks of the River Nene. Now anyone can follow in his historic footsteps by taking a walk along the Sir Peter Scott Way.

The lighthouse marks the beginning of either a seven-and-a-half or seventeen mile family-friendly route. Walking along the banks of the salt marshes gives perfect views over the finest Fenland landscapes, boasting wonderful flora and fauna including numerous varieties of birds and butterflies.

*To find out more about the exciting new projects at the Sir Peter Scott Lighthouse or the Snowgoose Wildlife Trust visit http://www.snowgoosetrust.org