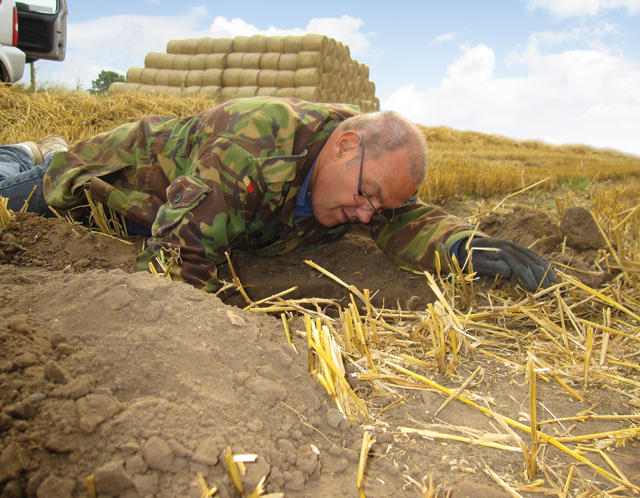 The Linwood Mirror, a first for Britain

My mobile rang: “Can you come out to Market Rasen right now and bring your camera?” Those few words were to herald a quite interesting historical experience for me and Mike O’Bee, local amateur archaeologist and expert in Lincolnshire Celtic history.
It all sounded extremely intriguing, as he thought he might have discovered a treasure hoard. When I got there, sure enough, he was in a deep hole and was in the process of carefully uncovering and lifting what looked like a largish bronze lid from the ground. What was beneath that ‘lid’? That was the tantalising question. Was it a hoard of Roman gold coins?

A lot of fantastic treasures have been discovered beneath the sod in Lincolnshire. The Holme hoard, 408 silver roman coins; the Normanby hoard, 47,912 roman copper coins found in 1985 and a hoard of 420 Anglo Saxon coins found in Tetney to name but a few.

These archaeologist types have the patience of Job. It was another thirty minutes before Mike lifted this bronze ‘lid’ out of the ground. The farmer was also with us by this time and he was doubtless thinking: “When that lid comes out I may never have to work again!”

Mike placed the bronze lid to one side and we all looked down into the hole. I could only see the imprint of where this lid had been, no bronze container brimming over with gold and silver coins. We all looked puzzled, so Mike picked the lid up again for a closer look. I was beginning to convince myself that it was a bit of farm machinery and yet it did look like it had been carefully buried. It seemed to have been placed perfectly flat in the ground and was well below the plough soil and that did not indicate a bit of farm machinery.

I commented that the surface that had been facing upwards and was convex simply did not look ‘old’ and looked so smooth. We perhaps should have got a clue from that but we didn’t. Mike insisted it had to be very old because of the context of the find and so we were right back to “What the heck is it then?” It had been deliberately buried about 45cm below the surface, well below the plough soil which is only about 25cm–30cm. He turned it over. It had four concentric rings but there was no sign of a knob and so maybe it was not a lid at all – but what was it?

Mike phoned Dr Adam Daubney, the local finds liaison officer, but he was on a week’s leave. The next day Mike took the object to the local museum to show the curator and we were delighted to see he had no idea what it was either, neither did the conservator. When the finds liaison officer returned from holiday and saw the photographs we had sent him he was on the telephone immediately and arranged to come and pick the object up next day. He told us he had recently been reading about Celtic and Roman mirrors and was pretty sure that this was indeed a mirror and not a pot lid. We thought he was going to do cartwheels!

He wasn’t sure if it was Celtic or early Roman but he was sure it was a mirror and would get back to us when he knew more.

The following day Mike got an email. “Hi Mike, I’ve tracked down some identical examples from Trier and Cologne. This is definitely a mirror and it appears to be a rare import to Britain. This one definitely needs writing up for publication, which I will enjoy doing very much.”

However, in spite of my own amateur status I still had many questions. Where is the handle? Looking at those concentric circles on the concave side, how on earth was it made; in other words, was it really old or still some kind of contemporary machine part?

A few days later Mike received it back from Lincoln museum. We were told that it was unquestionably a mirror and was early Roman of a specific type, known as a Lloyd-Morgan Type E mirror which dated to the third century AD and was manufactured mainly on the Rhine frontier at Trier and Cologne. It measures 12cm in diameter.

Adam Daubney had examined it thoroughly using various hi-tech instruments and discovered that it had been tinned on both sides and there was no trace of enamelling at all. The colours in the centre of the concentric rings are not the remnants of enamelling as we all imagined but simply copper corrosion. It must have gleamed beautifully when it was new.

One evening Mike and I looked at this mirror again, closely. In particular we debated (argued) about the stud that was right slap bang in the middle of the mirror. I placed the edge of a steel ruler from this stud to the outer rim and saw a clear gap between the stud and the rim. After a couple of hours and several cups of tea later, Mike had a ‘eureka’ moment: “That stud is supposed to be there,” he said. “It’s to protect the mirror surface from wear.”

I laid the mirror face down on the desk and, sure enough, that once tinned surface would have been protected from scratches and abrasion because that stud lifted the mirrored surface clear of whatever it was laid on.

So how was it made? We were told it was made using the ‘lost wax’ method and then turned on some kind of a lathe where those concentric circles were made. I’m not sure why they needed to use a lathe after the lost wax method had been done but by now I bowed to those with much more knowledge than I have.

There was no handle, there were no signs at all that a handle had ever been there. Some call this kind of mirror a ‘palm mirror’. A wealthy lady’s maid would hold the mirror up for her lady in the palm of her hand while she applied her make-up or did her hair.

As far as is known, this type of mirror (usually found in a grave) is the first of its kind to be found in Great Britain and therefore is of significant interest historically and especially to the county of Lincolnshire.