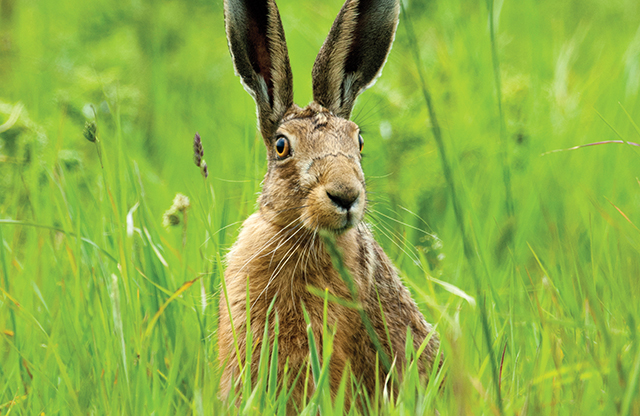 I can’t count the number of times I have been out photographing various types of wildlife when a hare has appeared – and almost always ambled my way.

Invariably it keeps on coming until it is around 3m away and then senses ‘something’ (me) and ambles off. Of course, if I were to move in the slightest it would take off like a rocket!

On a warm sunny day last August I was driving slowly along a farm track in Grainthorpe when I noticed a couple of hares sitting quietly about 150m away on a tilled field. I stopped the car to watch them for a while. Slowly one of them (the female or doe) made an attempt to move. In no time at all the buck was after her and the mad ‘August’ hares were off!

Since the breeding season for the hare is between January and August, it is a myth to think they only ‘go mad’ in March. March is a time when the crops are just beginning to grow, the ground cover is short and so they are easy to spot whereas during the rest of the spring/summer when the crops have attained some height their antics are rather harder to see.

Having watched them ‘perform’ many times, in my opinion the madness comes from the testosterone-fuelled buck whose advances invite the razor sharp claws of an unresponsive doe, who rips fur and even flesh off him with a few huge kicks thrown in. Still he continues the pursuit even while bits of his fur are still descending to the ground!

On this particular occasion I hid behind my car, using it as a hide, and watched them through a telephoto lens.

Every 20 minutes or so the chase would begin. Suddenly she ran towards the car with him hard on her heels and in seconds they were both whizzing around the car, with me trying to follow them through the viewfinder. It was impossible; they were so close now that had I managed to get a clear shot of them it would just have been a part of a head or leg. After this melee they both stopped for breath. Only then did they see me – and were off!

Hare watching is fun because it is so unpredictable; one minute they are sleeping in the sun with not a care in the world, the next a predator or tractor has them on the move again. And they can move: they are the UK’s fastest mammal, managing 40mph.

Weighing in at around 3.8kg (8.38lbs) they can live for around 12 years. With a gestation period of 41/42 days they can have three litters per year with three or four leverets per litter. These little brown charmers are active from birth and the doe quickly disperses them around the field for safety. Hares make a ‘form’, a depression in the ground about three inches deep and when they lay in it with head down and ears back they are almost impossible to spot.

But do they give off a scent? I think they do. The fox cub pictured, seen in the stubble at dusk, knew there was ‘something’ nearby and kept slowly searching until it got too close to a sleeping hare that simply leaped right over it and was off, easily outwitting the startled cub who was left very perplexed.

So it seems our beautiful countryside friend will continue to be known as the ‘March Hare’ but as for mad, I think that label belongs, well and truly, to the poor beaten up buck, don’t you?