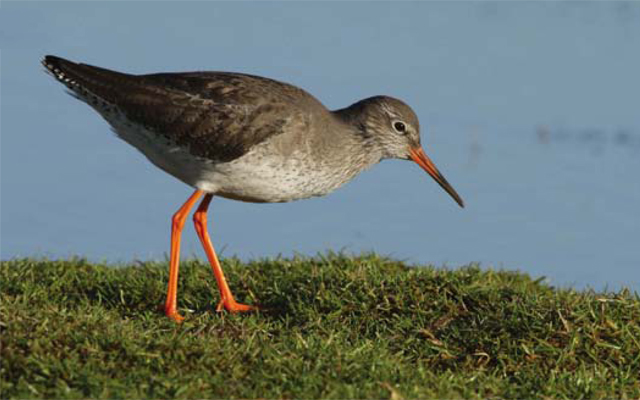 The making of Frampton Marsh

When I first saw the new facilities at the Frampton Marsh RSPB site one sunny weekend in June 2009 I was impressed. That such a wonderfully spacious, diverse environment for so many species of fauna and flora had been created within a few miles of my home seemed almost too good to be true.
Yet I need not have been so surprised as Simon Wilson, the friendly Visitor and Publicity Officer at Frampton Marsh, has since remarked about the recent history of the site: “In 1984 the RSPB purchased one of the largest and most valuable salt marshes in the world.” Yes – and it was right on my doorstep!

Sadly, the importance of The Wash and the nearby marshland and fenland for wildlife has not always been appreciated. This huge area was once a haven for all kinds of wildlife species and plants – what we would term biodiversity today. When the fens and marshes were reclaimed for agriculture en masse from the seventeenth century onwards these vast areas disappeared, transforming them into the most fertile soil in the country. While this may have been a boon for humans, it was a disaster for wildlife and birds in particular. From that time onwards The Wash became even more precious as an essential home for certain species, as Simon was at pains to explain to me: “This area was proven to be an important site for breeding redshanks. These elegant wading birds nest in the tussocks of vegetation on the salt marsh and thrive on the invertebrates they find, by probing with their extra long bills, in the mudflats.” With the RSPB being at the forefront in nature

conservation in this country, and with an ever-increasing acreage of arable land being set aside, it was decided to make the most of the opportunities available, as Simon said: “More recently in 2007 arable farmland inland of the seabank was purchased to house an ambitious wetland creation project, which would see the recreation of the lost landscape of The Wash.”

The Frampton Marsh site lies at the mouth of the River Witham, near Boston, affording wonderful views across the vast salt marsh and The Wash, as well as inland towards Frampton village and Boston Stump. On a clear day the cliffs along the Norfolk coast around Hunstanton are visible. Quite often large ships of varying kinds, from this country and beyond, can be seen slowly navigating the nearby river Witham.

Typical of most RSPB sites, Frampton Marsh is run by a small number of dedicated expert staff, and is reliant on significant numbers of volunteers who are always on duty at the impressive visitor centre which, with the exception of Christmas Day, is open all year round from 10am until 4pm. “During the recreation of these lost habitats,” Simon continued, “excellent facilities were built, including a visitor centre with panoramic views, toilets and hot drinks available, along with three birdwatching hides, designed to bring people closer to nature. Over three miles of wheelchair accessible footpaths were created as well as free parking facilities and picnic areas.”

And don’t worry if you don’t have binoculars with you, as these can be borrowed, and feel free to use the in-house spotting scopes which permanently point to areas of interest from the windows of the visitor centre. There are three toilets in all, one of which is for the disabled.
Aside from the visitor centre, the three hides can be accessed by relatively easy walking. The ‘360 Hide’, as the name suggests, is designed to get an impressive all round view and nearby is the ‘Reedbed Hide’ which overlooks that specific habitat. The ‘East Hide’ is a little further away, nearer to the seabank, but it is well worth the extra effort to reach it; on the way you are often rewarded by such wonderful sights as hares loping around, as well as bird species like the reed bunting, sedge warbler and little egret

THE VISITOR CENTRE
coming quite close by as you walk. Keep an eye out, too, for rarer plants such as bird’s-foot-trefoil in the summer months.

What’s more, beyond these wonderful facilities there is so much more to see. The Frampton Marsh site provides many miles of rewarding walking, including the extensive sea wall, as well as a broader range of habitat for the wildlife. Simon Wilson was rightly proud when describing some of the site’s statistical facts: “The 120 hectares (297 acres) of wet grassland have been created in conjunction with the Environment Agency. A nineteen hectare (forty-seven acre) area of developing reedbed has been created, with 15,000 reed stems planted by hand to provide a suitable habitat for declining birds such as bitterns and bearded tits. A further twenty-one hectares (fifty-two acres) of freshwater pools known as ‘scrapes’ have been created as a safe breeding ground for other wading birds, including avocets and little ringed plovers, as well as a safe feeding ground for thousands of birds on migration.”

Impressive indeed and within a year of opening the site was witness to probably its rarest migrator so far: an oriental pratincole, which entertained birders and twitchers alike for a few days near to the East Hide. This year saw the addition of water voles breeding between the Reedbed and 360 hides, although it has to be said that the extremely harsh December of last year seems to have devastated the barn owl population. Nevertheless, birds of prey like kestrels and marsh harriers can often be seen, as well as an occasional hen harrier, merlin and peregrine.

The fact is that, no matter what time of year you visit, you will be rewarded – although the autumn migration is especially good and long lasting. Even in winter, a time when perhaps too many of us sit inside taking little exercise, the sight of large flocks of brent and pink foot geese and the sheer variety of duck makes you realise how lucky we are to have places such as Frampton Marsh near to hand.

It is fitting to allow Simon Wilson to have the last word: “Since the opening of the new habitats and facilities in April 2009, over 80,000 people have visited and over 200 species of bird have been recorded. As the site develops, it is hoped that these figures will continue to rise as more and more people are able to get close to nature.”