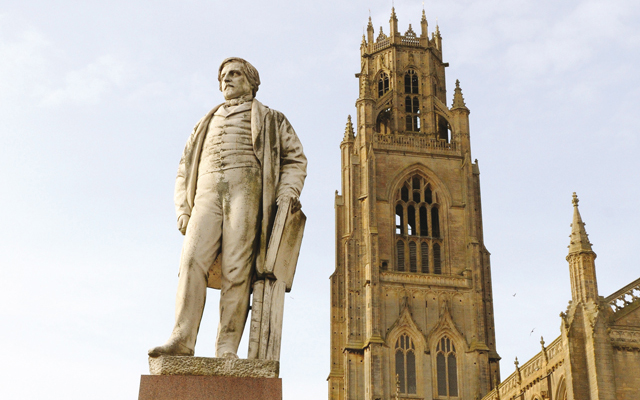 The man who watches over Boston

Herbert Ingram made a lot of money by founding the ‘Illustrated London News’ – and much of it he spent on good works for Boston.
Standing sentinel on a stone plinth high above Boston Market Place is an imposing figure, gazing over the shoppers and stalls not at nearby St Botolph’s Church but perhaps rather more appropriately at the Nationwide Building Society. His name is Herbert Ingram, a thick-set, pugnacious, rather round-shouldered character with shortish dark hair. In real life he was much shorter than his statue would have us believe, but like many short people he was intensely ambitious. He achieved in his forty-nine years a remarkable catalogue of successes, which fully justify his place of eminence above the heads of his fellow townspeople.

Herbert Ingram was born in 1811, the son of a local butcher who died when he was still an infant. He and his sister were brought up by their mother in some poverty, but he received the rudiments of education at Laughton’s Charity School, an establishment providing for ‘the education of the poorest freemen’s sons and the placing out as apprentices three such children each year’.

In Herbert’s day this school operated in the south-west chapel of St Botolph’s, then badly in need of restoration. He then moved on to the much larger National School in Pump Square, where life was much tougher and a handy pair of fists came in useful from time to time.

He was fortunate to be apprenticed to Joseph Clarke, a learned and well-read tradesman with premises in Market Place. Clarke was primarily a printer, but supplemented his income with a handy side-line as a chemist and druggist, making up his own prescriptions. Clarke gave young Herbert a good report, describing him as ‘patient, industrious, persevering and always unwilling to abandon anything he had begun until it was entirely completed’.

Herbert certainly was acutely ambitious, and set out to learn every aspect of the printing trade. Born without the semblance of a silver spoon in his mouth, he was determined to acquire one, no matter what obstacles he had to surmount. He became a keen disciple of Feargus O’Connor, whose creed was social justice for the working classes, and whenever there was a radical politician in town, he would be sure to elbow his way to the very front of the crowd.

Realising his chance of making his fortune in Boston was slim, for everyone was aware of his childhood poverty, he followed Dick Whittington’s example and set off for London. At the age of twenty-one he found work as a machine printer, and dedicated himself to working harder than anyone else in the trade.

He became friendly with Nathaniel Cooke, a well-educated lad from a good family, who later married his sister. Nathaniel had the literary ability which Herbert lacked – he never did master how to construct a grammatical sentence – but the two young men made a good team. Herbert had the drive and he was a born entrepreneur.

Their combined savings were enough to start a provincial business in Nottingham, where they set up as printers, newsagents and stationers. Remembering Joseph Clarke’s side-line back in Boston, Herbert also devoted a corner of the shop to an agency for pills.

The partners were fortunate to come across a descendant of Thomas Parr, who had lived to the incredible age of 152. Old Thomas claimed that the secret of his longevity was a vegetable pill supplied from the recipe of Dr Snaith, back in Boston. Somehow Herbert Ingram managed to purchase the recipe, and the sale of Parr’s Life Pills soon became a real bonus.

How many of the two partners’ clients lived to a ripe old age history conveniently does not record, but with profits from the pills they were able to move back to London and set up a printing business in the heart of the metropolis. Herbert Ingram’s next venture was to take up an idea from a member of his staff called Marriott, and to found an illustrated weekly newspaper.

Ingram held a sincere belief that an understanding of topical news should not be the prerogative of the well-educated and the wealthy. If pictures could supplement the text, he argued, it would not be necessary to be literate in order to know what was going on in the world. So he ignored those who dismissed the idea as preposterous or a mere gimmick, and founded the ‘Illustrated London News’ in 1842, selling for sixpence a copy. He thus became a newspaper proprietor at the age of thirty-one, and it was certainly the first paper of its kind.

The ‘Illustrated London News’ was an instant success. This was partly due to Joseph Clayton the publisher, who already published ‘The Spectator’ which was the best-selling weekly in the business. But it was also because of the proprietor’s drive, tenacity and indeed ruthlessness. Circulation soon reached 66,000 copies weekly, and the issue that featured the funeral of the Duke of Wellington in 1852 sold 250,000 copies. Three years later, for the Christmas 1855 edition, coloured prints were used for the first time.

Herbert Ingram’s ruthlessness showed itself in the way he used the skills of clever people without ever giving them the credit that they deserved. To those whom he saw as being of no threat to his prestige he would be kind, generous and encouraging, and he certainly was an excellent man of business. But he could be intolerable to his closest and most talented colleagues, especially when he was drinking heavily.

By now, Herbert Ingram had married Ann, only daughter of a prosperous farmer from Eye, near Peterborough. In due course the couple had ten children, the first being stillborn. Of the surviving nine, four were sons and five daughters.

Despite his shortcomings, Ingram did a great deal for the town of Boston, for which he retained a deep affection all his life. In 1853 he bought the patronage of the vicarage for £1,050, and he was instrumental in the major restoration of St Botolph’s Church (The Stump) in the same year. It was here that he first learnt his alphabet and the rudiments of addition, and now he played his part in restoring it to the glory of its past. In particular he paid for the staining of the glass in the glorious east window.

Ingram then turned his attention to what had been a longstanding bone of contention with Boston residents – the scarcity of drinking water. In 1815 water had cost a penny a bucket from water carts, and the only public pump was in Pump Square. This was served by two underground cellars, which acted as a primitive reservoir. Otherwise, people used to catch the rain as it landed on their roofs or trickled into their gutters.

Ingram formed the Boston Water Works which built a reservoir twelve miles north of the town at Miningsby, where there is a flat tableland behind Revesby Park.

This is 170 feet above the pavement height in Boston, so water was able to run freely through twelve-inch diameter iron pipes. This proved a great boon to the town.

Railways were all the rage in the mid-nineteenth century, and Ingram was determined that the town and its port should be connected to the national network. The Boston, Sleaford and Grantham branch line was constructed in 1853, and a loop line heading northwards linked with the Great Northern Railway main line.

Perhaps it was from the nearby railway line that he first spotted the derelict house that he determined to restore and convert into a local home for Ann and their growing family. Swineshead Abbey had originally been built by Sir John Lockton in 1607, on the site of an old Cistercian abbey.

By 1855, when Herbert Ingram bought it, the house had deteriorated badly. He spent a lot of money on a thorough restoration of this handsome building. Ingram also acquired about 2,000 acres of farmland around Boston.

As a benefactor to the town and a wealthy landowner, it was no surprise when Ingram decided to stand for parliament in 1856 as a Liberal. It was a by-election and he won comfortably, securing 521 votes against 296 cast for his opponent, William Henry Adams. Ingram was assisted in his campaign by Mark Lemon, the editor of ‘Punch’, who had lived in Boston as a teenager. Herbert Ingram was re-elected the following year, and in 1859.

This triumph was the final accolade of his transformation from the urchin who stood in the gutter and watched the carriages of the wealthy roll by, thirty-five years earlier. Before and during his parliamentary career he received very generous coverage both in text and pictures from the ‘Illustrated London News’.

But no amount of ambition can overcome the cruel hand of fate. In 1860 he took his eldest son, also called Herbert, on a trip to the New World to obtain illustrations for an ‘Illustrated London News’ feature. As they were travelling across Lake Michigan their ship collided with another, and a large number of people were drowned in the tragedy. Ingram’s body was recovered and brought home for burial, but sadly that of his fifteen-year-old son was never found.

Boston mourned its famous figure with dutiful dismay. Two years after his death, the monument to Herbert Ingram in Market Place was unveiled – and there he is to this day, almost one-and-a-half centuries later, left hand clutching a weighty tome of ‘Illustrated London News’.

By the pedestal a girl is carved, pouring water from an urn, signifying what Boston feels was his greatest achievement – a plentiful supply of pure water for his home town. It is a paradox that water was ultimately to cause his death all those miles from home, when he was not yet fifty years of age.