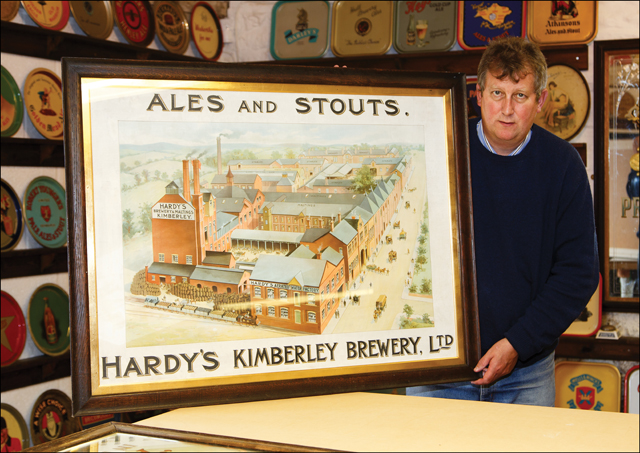 For over thirty years Richard Percival has been collecting old British brewery memorabilia including pre-war ashtrays, ceramic coasters, matchstrikers, jugs, bells, mirrors, showcards and menu holders. His main passion, however, is his extensive collection of British brewery trays or ‘waiter trays’ to give them their correct title.
Today I have circa 1,200 trays, all of which pre-date the 1970s and some of which date as far back as the 1870s, effectively a century of British brewery trays. The collection is the largest in Britain and probably the world, weighing approximately half a ton.

There are parts of the collection which I particularly love and being an East Midlands man, who once lived in Corby Glen, Lincolnshire, I am most delighted when I add a tray from this county.

MY LINCOLNSHIRE CHALLENGE
Despite the size of my collection there are still a number of brewery trays I am still searching for from closed Lincolnshire breweries. The tray I would most like to add to my collection is one from Soulby, Sons & Winch Ltd, once of West Street in Alford.

This brewery was acquired by J W Green Ltd in 1951 with 144 public houses. I have been looking to acquire a tray from this brewery for over thirty years and it wasn’t until this year that I even knew if a tray existed or not.

The good news is that it certainly does (see picture of 1920s tray) but the bad news is that it’s still missing from my collection. Can you help? Do you have a friend, relative or neighbour who can?

BUILDING MY COLLECTION
My collection started in 1982, when I was given a lovely modern brewery tray from George Bateman & Son Ltd Salem Bridge Brewery, still brewing in Wainfleet.

At first I would ask pub landlords if they had a spare tray but then I began to scour local junk shops and collectables antique shops. During the late 1980s regular visits to Junktion in New Bollingbroke, near Boston and the huge antiques centre at Hemswell both enabled me to uncover a few lovely older brewery trays.

A breakthrough occurred in the early 1990s whilst visiting an antiques fair in Lincoln. There I met a fellow collector of brewery memorabilia or ‘Breweriana’. He became the first person in what has now become a network of around fifty other sad cases! I was advised to target a number of specialist advertising fairs and larger international fairs, such as Newark and later Swinderby in Lincolnshire. The result was staggering and within a few years I had amassed a collection of around 1,500 trays and more importantly created a network of friends who still help me turn up rarer examples today.

REFOCUSING MY COLLECTION
The attendance of many events continued as one of my prime routes to acquiring trays but I did, however, receive the greatest shock at one of these fairs in the late 1990s.

I approached a stallholder who had in his possession probably one of the nicest trays I had ever seen, a Bullard’s Brewery example from Norfolk in pristine condition and obviously very old. I enthusiastically enquired about the price. I was staggered to hear that he wanted £150 for the tray and I refused, a decision I regret to this day.

The end of that decade saw my collection bulge at around 2,000 trays. The collection had become too big and so I decided to part with around 800 trays. I stopped collecting trays produced after 1970 and sold all the trays after that date. I also decided to focus most of my time and effort on acquiring pre-WW2 trays, these being distinguished by having black coloured backs and which are my personal favourites. Black-backed trays became my new passion.

Just when the trickle of trays had dried up eBay arrived! The online auction site uncovered probably the biggest number of quality trays with many pre-war black-backed brewery trays appearing, which I did not even know existed.

In 2006 one of my dreams was achieved. An old cow barn was converted into a mini museum in which 400 of the best trays are still displayed today. This room attracted the media and resulted in several TV appearances including BBC’s Antiques Road Trip.

THE FIRST BREWERY TRAY WEBSITE
Over the past two years I decided to create a forum whereby any individual could learn about brewery trays and with this in mind I developed a new website www.brewerytrays.co.uk

The website has been received very positively from the press and collectors alike. It features all 1,200 British brewery and cider trays in my collection, including a photograph of each one and the history of the brewery it advertises.

As well as the trays themselves, which without saying are the main focal point, an information section includes a number of special features.
• TV appearances plus a forty-five second introductory video inside the display room.
• The history of brewery trays 1870–1970
• Articles from magazines and newspapers from the early 1990s to date
• Ten of the most frequently asked questions including how to date and value a tray

I feel sure that at least one of these old Lincolnshire breweries produced a tray or two.

If anyone could help I’d greatly appreciate it if you could contact me. You can contact Richard at tel: 01664 464883 or email: richard.percival@hotmail.co.uk