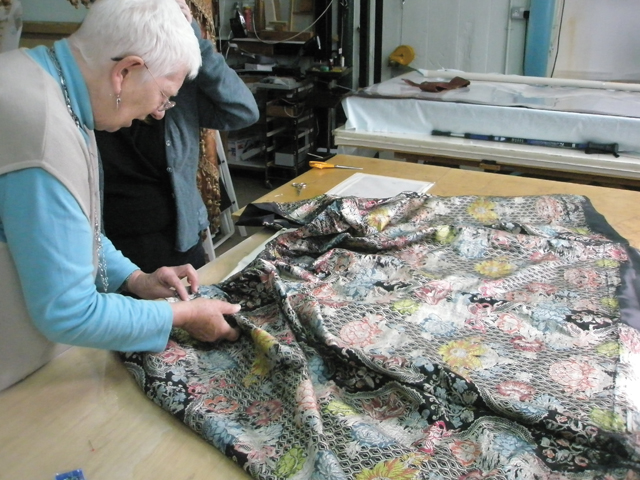 The mystery of the mantua

In 1937 a Miss Charlotte Mary Epton, schoolmistress in North Willingham, loaned an early 18th century mantua style dress to the Usher Art Gallery, Lincoln, for inclusion in their Coronation Exhibition.
At the time it was catalogued as a court mantua dress of the Queen Anne period (1702 – 1714). When the exhibition closed Miss Epton offered the dress as a gift to the Usher Gallery, stating in a letter ‘…the gown has been in my family for 200 years and was much valued by my mother…’ She also requested that the dress go on display and be kept in a glass case to keep it free from dust and moths. A very sensible curator replied that to permanently display such an item, even in a glass case, would lead to its decay. Would we still hold the dress in our collections today if Miss Epton’s request had not been granted?

The mantua style of dress originated in the late seventeenth century as a coat-like garment, based on an article of clothing from the East called a banyan. The name mantua comes from the French word ‘manteau’, meaning coat, and refers to the bodice and train which is usually worn over a petticoat constructed from the same fabric as the mantua. Underneath the petticoat was a hoop or panniers constructed from linen and cane, which could vary in size or shape as fashions changed. At times petticoats were so wide that architecture and furniture had to be adapted to accommodate them. The bodice of a mantua was open and the gap filled with a stomacher, a stiff ‘V’ shaped piece which could be made from the same fabric as the mantua, or in a contrasting colour, and was often highly decorated. The stomacher was pinned or sewn in place after the mantua was put on and a narrow belt was added to finish the waistline. By the early 1700s the mantua had become a formal dress worn for grand occasions and for attendance at the Royal Court, and by the 1760s mantuas were only ever worn at court, the fashion dying out by the 1820s when George IV declared that court ladies were no longer required to wear hoops.

The Lincolnshire mantua comprises a gown and petticoat made from Spittalfields silk. The ground weave is dyed black and is decorated with a white lace pattern, brocaded with large, stylized, brightly coloured flowers. Although we know that black was a fashionable colour in the eighteenth century very few examples, if any, have survived as the methods of dying black were destructive to textiles, particularly silk.

For many years the Lincolnshire mantua lay in storage at the Museum of Lincolnshire Life in Lincoln. In 1998 Sheila Landi, textile conservator of the Landi Company Ltd, Stamford, was hired to complete a survey of the county’s costume collection. Upon opening the box containing the mantua she immediately realised she had stumbled upon something unique. She called upon Natalie Rothstein, internationally renowned expert on eighteenth-century woven fabrics and former curator at the Victoria and Albert Museum, London, to study the dress. Although I was not working at the museum at the time I have often heard the story of how Natalie’s jaw ‘hit the floor’ as her eyes fell upon the mantua laid out on a table. She was anticipating a Japanese copy from the 1920s and the mantua to be a fancy dress, but instead she recognised the fabric as a very rare survival of a style known to exist in the 1730s, but of which almost no examples have survived. Natalie later dated it to precisely 1735, so Miss Epton’s claim in 1937 that the mantua had been in her family for 200 years was fairly accurate and leads us to believe the dress had been in her family from new. As conservation progressed Sheila discovered the dress had been adapted in the 1740s to bring the shape up to date with the new fashions of the decade. She noted further minor alterations had been made over the years and the mantua may have been used as a fancy dress costume at some point.

In 2010 Sheila conserved and restructured the mantua to its original design as far as possible and she also constructed a replica pannier and undergarments for use in its display. Sheila offered to do this work gratis and conservation materials were funded by the Friends of Lincoln Museums and Art Gallery. During its conservation and restoration Sheila noted that the original construction and stitching was quite crude and more likely the work of a provincial country mantua-maker rather than a high class London seamstress.

For me there are two mysteries surrounding the mantua: – firstly, how has this dress survived over the centuries, considering the destructive methods of dying the silk black meant that the fabric lost strength almost as soon as it was made? The second mystery is how did a schoolmistress from North Willingham come to have such a high status dress which she claimed had been in her family from new? It is interesting to note that the collection also holds an eighteenth-century Chinese silk dress which once belonged to Miss Epton. This dress is equally high in status as the mantua, but not as unique; the Victoria and Albert Museum holds a similar example. Often, wealthy ladies passed tired and unfashionable dresses on to their maids; perhaps this is how the Epton family acquired the dress? I believe this theory is doubtful. As previously discussed, in 1937 Miss Epton stated her family had owned the dress for 200 years and Natalie’s dating of the dress to 1735 means it is likely the family owned it from new.

So who was Miss Charlotte Mary Epton? Preliminary family history research has revealed that Miss Epton was born in Langton by Wragby in 1877 to William Epton, a farmer, and his wife Sarah (née Brocklesby). Charlotte was the third of five children and the eldest of two daughters. The 1881 census shows that her father employed a governess and five servants, so the family must have been prosperous. By 1891 Charlotte was a scholar living with her spinster aunt, Elizabeth Epton, at 1 St Leonards Lane, Lincoln and in the 1901 census she is listed as a governess to the Newton family in Eltham, near London. At the age of twenty-four she was earning a wage teaching the children of a civil servant. Charlotte had returned home to live with her parents in Langworth by 1911. At this point there was a grandmother, a domestic nurse (probably to care for the grandmother, who was ninety-three) and one servant also living in the house. Charlotte’s profession is listed as an elementary school teacher. Electoral records show that between 1936 and 1942 she was working as a schoolmistress at North Willingham, although she may well have held this post prior to 1936. In 1942 Miss Epton would have been sixty-five so it is likely she left the school due to retirement.

It is still not known how Miss Epton came by such a dress, although further research is progressing. Financially her family were comfortable, but not of the social standing to have owned and worn a dress like the mantua 200 years earlier. It is usual for high value feminine items such as jewellery, ceramics or silverware, to be passed down the female line from mother to daughter. Could the dress have entered the Epton family from her mother’s family, the Brocklesbys? Miss Epton said her mother valued the dress. Was this because it came through her mother’s branch of the family?

As regards the survival of the dress, Sheila believes that by chance the dress must have spent most of its life stored in the correct environmental conditions – kept dry and in the dark, as recommended by the sensible curator. Miss Epton’s final letter to the Usher Gallery states ‘I will leave the gown in your care hoping that it will continue to exist long after I have passed away’. Miss Epton died in Langworth in 1962. She never married and had no children to bequeath the dress to. I hope that she would have been thrilled that fifty years after her death her mantua dress will be on display, finally restored to its former glory.

Due to the fragile nature of historic textiles the eighteenth-century costume and textile collection is rarely on display; however the Lincolnshire mantua will be exhibited for the first time since 1937 in ‘The Art of Dress: 18th Century Frocks and Finery’ at The Collection: Art and Archaeology in Lincoln from 26th January to 24th March 2013 (free entry). Accompanying the mantua will be further eighteenth-century costumes, embroideries and decorative art. Sheila Landi will be giving a talk at The Collection about her conservation work on the mantua on 7th February 2013 (admission charge). For images and further information about the mantua, and details of other items held in the Lincolnshire County Council’s heritage collections, please visit www.lincstothepast.com For enquiries contact Sara Basquill, Collections Access Officer – Local Studies on 01522 555207 or at Sara.Basquill@lincolnshire.gov.uk

(With thanks to Sheila Landi for her conservation report and Lynda Hotchkiss for the family history research).