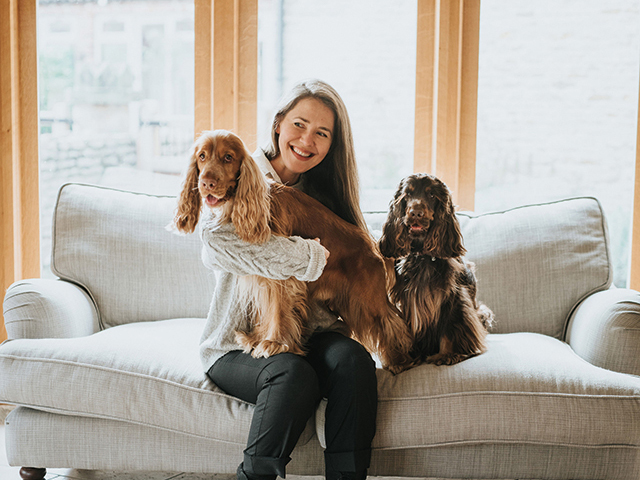 The companionship of dogs has always been important to Natalia Ashton. Now she’s drawn on her 30 years’ experience of living with and raising them to write a book dedicated to her favourite breed. Interview by Kate Chapman
The Cocker Spaniel has been Natalia’s dog of choice for more than a decade, during which time she has channelled all her efforts into studying, observing and learning everything she can about them in order to give hers the best life possible.

Dedicated to her first cocker, Oscar and his two successors, Cooper and Fred, her book Perfect Cocker Spaniel is split into two comprehensive sections – theory and practical – covering all aspects of the breed, diet, health, grooming, training and useful tips for anyone else with an interest in the breed.

“I like to write and started a blog for myself after Oscar died to help deal with the pain of his loss,” explains Natalia, who moved to a village near Brigg a couple of years ago after falling in love with the Lincolnshire countryside when she visited the area to collect Cooper from a breeder.

“A bit later I started sharing daily pictures of Cooper on Instagram and soon other puppy parents were contacting me, asking for tips and advice and it gave me an idea that maybe I should put it all down in a book.

“To me books are timeless, and I thought it would be a good way of keeping the story of Oscar alive too.”

Natalia, who grew up in Russia, has always been passionate about dogs and proved herself ready to have her first when she was just 12 years old, after attending an intensive year-long care course.

“After deciding I wanted a dog, my parents told me all the responsibility would be mine, so I completed a course which went into all aspects of anatomy, physiology, nutrition, grooming, training and puppy care,” she recalls.

“It was very intensive. At the end of the year they brought me a puppy – it was a poodle, who became my companion. It was wonderful – and that’s where it all started really.”

Her next dog was a Doberman, but it wasn’t until she came to England that her love affair with the Cocker Spaniel began.

Natalia initially moved to Surrey, after meeting her husband Simon while he was on holiday in Russia. The pair kept in touch after he returned home and following visits to each other’s home countries they knew they wanted to be together and set up home in England.

Natalia, who has a degree in economics and is also a translator, decided on a change of career and trained in nutritional therapy, before setting up her own practice advising people to maintain and improve health through diet and lifestyle changes.

Once settled she decided the time was right for a puppy and set her heart on a Cocker Spaniel having never had one before.

“Eventually I found an advert for Oscar who went on to become our baby,” she says.

“He was a wonderful dog who never left my side – we were inseparable, and Oscar was my world, my life, my everything. Cocker Spaniels are just beautiful dogs, they are such little characters and so loyal.”

Tragically Oscar passed away when he was only six-and-a-half as a result of an L4 vaccine that led to fatal haemolytic anaemia.

“It was just awful after I lost Oscar – to me it felt like losing a child. He was always by my side and I just felt bereft,” she says. “Everything felt so pointless without him and I just couldn’t understand why it had happened to us. My whole world had turned upside down.

“I couldn’t concentrate at work, I didn’t want to talk to people, it was a terrible time.”

When Natalia’s husband suggested they get another puppy she agreed and soon found an advert for Cooper, whom they welcomed home a few weeks later.

It was after visiting Lincolnshire to collect him, the couple noticed how beautiful the county’s landscape was. Agreeing what a great place it would be to live with their dogs they took the bold decision to move their lives across the country, and they haven’t looked back.

Natalia had already started studying canine nutrition before Oscar died, but completely embraced it in 2016. After settling into her new rural home, she continued her extensive research and finally finished her book Perfect Cocker Spaniel, which became her tribute to Oscar. By this time the couple had also welcomed cocker Fred to the family too.

“My book is a straight-talking guide, written for the love of the English cocker – for the most caring parents and the happiest pups,” says Natalia.

“The comprehensive theory covers the history and characteristics of the breed, provides expert advice on nutrition, breed specific diet, in-depth information on grooming and the art of hand-stripping, health, first aid and preventative care, behaviour, training and more.

“The practical part fully prepares you for finding, raising and living with your English cocker puppy month by month to ensure that your chubby little guy becomes the most perfect spaniel you’ve ever dreamed of!

“I’m so proud of the book I’ve written and I can live happily knowing that the memory of Oscar will remain alive forever. And that helps to deal with the heartache a little bit better.”