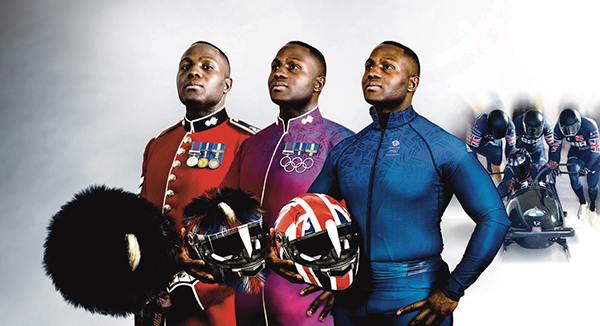 Travelling at speeds of up to 90mph down an icy, banked track is not for the faint-hearted but for bobsleigh pilot Lamin Deen there’s nothing like it for an adrenaline rush, as he tells Kate Chapman.

He found his calling in life thanks to the army and has embraced the opportunities it has afforded him wholeheartedly, rising to the pinnacle of competitive sport as part of the British bobsleigh team.

Lamin has always been passionate about sport and for the past 10 years the Grenadier Guardsman has been part of an elite sports programme, enabling him to train and compete full-time. He represents his country at the highest level in two and four-man events, has competed at two Winter Olympics and won numerous medals as well as breaking speed records – he’s one of only three competitors to reach speeds of 156km/h.

“Without the army, or the Grenadier Guards, I wouldn’t have been competing at the Olympics. I wouldn’t have travelled to the places I have been. I definitely wouldn’t be in the position I am now,” says Lamin, who lives in Welton, near Lincoln, with his partner Sarah and their children Theo and Aria.

“l had the chance to further my boxing career and box for the regiment, anything that was sport related, I always had a chance to do it. I’ve made some great friends, was promoted quickly up the ranks to sergeant – I really found my calling in life. If it wasn’t for the army, I wouldn’t be doing what I am now.

“I love the camaraderie of the bobsleigh and then there’s the adrenaline rush – you cannot replicate that anywhere else, going down a hill at speeds of over 85mph.

“You can’t make a mistake, you’ll crash or end up upside down, and you get that, every time you go off the top.”

Sport has always played a part in Lamin’s life. At school he excelled in football, basketball, athletics and cricket. Born in London, he lived there until he was seven, before spending two years in Sierra Leone, West Africa, where his family originates. On returning to England, he attended Burnage High School, in Manchester, devoting as much time as he could to sport.

“I was sport mad and spent every lunch and break playing football, basketball and cricket,” he recalls. “I played a lot of basketball for the school, it competed at a very high level and we’d travel all over. I boxed too, with one of the local clubs, where I used to go in the evening. Everything was sport orientated, but I loved it and would have a go at anything.”

After school, Lamin started college, but his career path took an unexpected turn when he accompanied a friend to the army recruitment office and found himself signing up. He’s now served 23 years in the Forces, completing tours to Northern Ireland and Bosnia, as well as other overseas exercises.

As a Grenadier Guardsman he’s guarded HM The Queen, taken part in the Trooping of the Colour and paraded outside many royal palaces.

It was while competing at an army athletics competition in 2007 that he was asked to try out for the bobsleigh team.

“I didn’t realise, but the military has a strong involvement in the bobsleigh, as it was heavily involved in the invention of the sport and is a strong feeder into the national team,” Lamin explains.

“I love the film Cool Runnings, it’s one of my favourites – I knew it off by heart. So, when they said bobsleigh, I was 100 per cent yes. A couple of months later I was sliding down a mountain in Italy as a brake man. The first time I remember thinking, what the heck is going on? I got to the bottom feeling really dizzy, and thought maybe this isn’t for me, but on the next run I was like, wow, and it went from there.”

Lamin quickly moved up the ranks, progressing from pusher in the two-man event to the crew of a four-man bob. He competed in the European Cup and World Cup divisions. Injury prevented him from attending the 2010 Winter Olympics, but following a change of position to pilot, he qualified for the games in Sochi in 2014, where his four-man squad placed 17th while his two-man team was

“It was disappointing, it’s four years’ preparation and then you don’t make it,” he says.

“The team suffered with injuries, but that’s elite sport, it happens, it happens to everyone. When you’re dealing with times down to 100ths of a second, everything can affect it – someone not having done their shoelace up properly, or if someone’s carrying the tiniest of injuries – so it was disappointing. But there’s lots to look forward to, our season starts again in October.”

From now until September, Lamin and his teammates will focus on dry land training including speed and power work twice daily. In June they move to the University of Bath, which has a push start facility. From October they will compete on circuits in North America and Canada, before moving onto European tracks, where the next World Cup takes place in St Moritz, the home of the bobsleigh.

Lamin has also been focusing on charity work, and has recently returned from Sierra Leone, where he visited a school in the area where his dad grew up. It was in desperate need of equipment including desks, chairs and writing materials and also lacked a fresh water supply. After fundraising, Lamin has started a project to create a borehole to bring up the natural water.

In June he takes part in another fundraiser, billed as the world’s toughest rowing race. GB Row is the ultimate rowing challenge, requiring teams to navigate complex tides and the changeable British weather as they row 2,000 miles around Britain unaided, starting and finishing at Tower Bridge.

“This is possibly going to be the hardest thing I have ever done and could take 25 or 26 days, if it goes well, depending on the conditions,” says Lamin.

“We’ll also be working with the University of Portsmouth, by collecting microplastic samples from around the coastline, so the condition of the waters around the country can be monitored, which will help compare the oceans. It’s going to be a busy year, but there’s lots to look forward to and I can’t wait for the racing season to begin.

“Every time you race in a bobsleigh there are so many emotions when you cross the finish line – fear, happiness, anxiety, disappointment, exhilaration. There’s nothing else like it.”