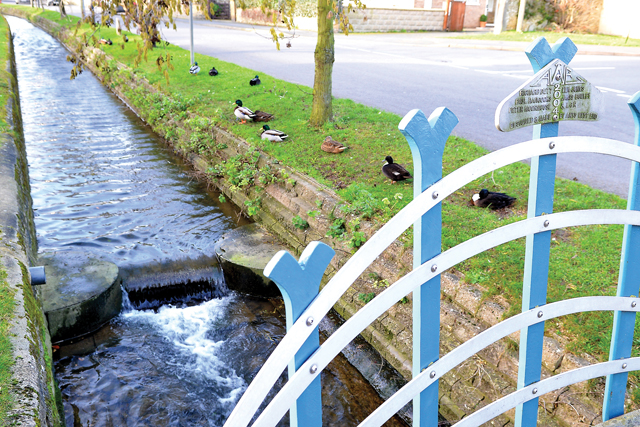 Ruskington is one of the largest villages in Lincolnshire and can boast a thriving community, a picturesque environment and a fascinating history.
Ideally situated just four miles north of the market town of Sleaford and sixteen miles from Lincoln, Boston and Grantham, it still has its own railway station and a regular main bus service making it a great location for young families and retirees alike.

It boasts a variety of amenities, including a modern medical centre, a selection of quality retail units, many clubs and societies and a Co-op supermarket, which encompasses the post office, meaning residents literally have everything they need on their doorstep.

In addition to providing a range of products and services the village’s businesses include a major employer, Tulip Ltd – which makes pork products – providing vital job opportunities.

Ruskington has a wealth of community spirit which will come to the fore later this year when residents will turn out in force for its summer village celebration.

Clerk to the Parish Council Eddie Findlay said: “Every two years the village gets together with the schools for the village celebration.

“One side of the High Street is closed and is packed with a variety of stalls and the schools have fetes and put on activities and entertainment as well.”

Plans are still being finalised for this year’s event but the last one took place in 2014 and saw stalls along High Street South as well as inside and outside the Winchelsea Centre where refreshments and food were also on offer.

The Youth Centre became a hub for children’s entertainment, activities and a crèche while parents enjoyed the treatments on offer at a pamper event. Outside the youth centre there were more stalls.

The main event, though, was the duck races along the Beck in aid of the Lincolnshire and Nottinghamshire Air Ambulance. They always prove to be a crowdpuller and an entertaining spectacle, and the 2014 event was not exception.

That same community spirit will also be in evident when the village once again takes part in the Best Kept Village Competition.

“We entered it a couple of years ago and did fairly well. But we want to do even better this year,” said Mr Findlay.

Though situated on flat fenland, Ruskington has features that have significant historical importance including an Anglo-Saxon burial ground and Roman road within the western boundary of the village.

The village is notable for its parish church, All Saints, which has been a place of worship for more than 900 years, having been built in the twelfth century on the site of an earlier stone church erected in the eleventh century. This earlier church is thought to have replaced an even earlier Saxon wooden church.

Today, the Nave and Chancel are as they were at the end of the nineteenth century, but the tower has been altered to provide a new vestry, kitchen and toilet. Solar cells have been installed on the roof of the south aisle to generate electricity for the church.

There has also been a Methodist Church in Ruskington since 1849 with extensions to the schoolroom and vestries added in 1867 and 1909 respectively.

The building at that time was heated by a coke boiler which was situated adjacent to the church building. Because of the proximity to the Beck, a stream which runs through the village splitting the high street in two, the stoke hole and cellars would occasionally flood which caused considerable difficulty and damage.

In 1924 the piano and harmonium were replaced with a small pipe organ and some of the young people had to act as organ bellow blowers.

By the 1940s the building was showing signs of extreme deterioration and it was decided that new premises should be erected but it wasn’t until 1957 that enough money had been raised to start work on a new church, which opened a year later.
Ruskington has two primary schools, Winchelsea and Chestnut Street Church of England school, both of which have received good standard Ofsted reports. And there is also one secondary school, St George’s Academy, which also operates in Sleaford. The school had 2,247 pupils on roll in 2012 across both sites.

However, education has been paramount in the village since 1868 when a national school was opened to house 120 children and was not provided for by local rates under the Education Act 1902.

In 1878, the Ruskington School was established and erected a school two years later; in 1903, the Board was abolished and the school became Ruskington Infants’ Council School, provided for by local rates; in or about 1947 it was renamed Ruskington County School. The Winchelsea School replaced it, opening in 1974 and moving to its current, purpose-built site in 1992.

When it comes to leisure activities, there are more than forty groups based within the village, as well as four churches, play areas and allotments.

The groups cater for sporting interests including football, scrabble and bowls. Young people can also enjoy meeting at the Ruskington Youth Club, which is located in High Street South.

Children have the use of five different play areas, two of which are directly owned by Ruskington Parish Council, which manages all five, and families or individuals can also relax in an open area known as Horseshoe Hollow which it is hoped will be an even more important area for the village in the future.

Ruskington Parish Council is hoping to secure Local Nature Reserve Status for Horseshoe Hollow. As an area of natural landscape with flora, fauna and wildlife representative of the locality and Lincolnshire in general, it is felt that this area of land is a very valuable asset for the locality and village in general.

The intention is to preserve, protect and enhance this area for the enjoyment of all local residents. By achieving Local Nature Reserve Status for Horseshoe Hollow, which is a legal definition and recognised nationally, this will provide some protection from development for several years to come.

RUSKINGTON GARDEN CENTRE
Run by the Elkington Family for over thirty years, the charming and award-winning Ruskington Garden Centre is housed in the original historic farm buildings on the edge of the village. The family still farm in the area and run the centre with a dedicated and knowledgeable team, many of whom have worked at the centre for years and have superb horticultural knowledge.

With a well-stocked planteria and a wide variety of high quality plants, trees and shrubs to choose from and welcoming gift and clothing departments housed in a lovely glass atrium, the centre has something for every visitor no matter what the season or weather.

The Ruskington Coffee Shop is well known for being a great place to relax and unwind and serves a huge range of freshly brewed barista style teas and coffees. The menu is varied, has something for everyone and also offers a tempting range of homemade cakes, bakes and slices. Working with a wide network of local food suppliers is fundamental to the working ethos of the centre, as is the food being “freshly prepared to order” which the family pride themselves on.

AWARD WINNING…
The main employer in Ruskington is Tulip Ltd, a division of Danish Crown, which is the largest pork producer in Europe and the biggest exporter of pork in the world.

Tulip International was established in 1990 through a merger of Normeat, Danepak, Jaka and Tulip, and in 1998 became wholly owned by Danish Crown. In 1999, Vestjyske Slagterier (VJS) and Danish Crown merged.

Tulip Ltd was established in the UK in 2002. Its links with Ruskington began in December 2007 when it acquired George Adams and Sons Ltd and consolidated its position as the UK’s market leader in food production and as a key supplier to UK supermarkets.

Adams had been a family butchers brand for more than 100 years, producing quality meats since 1910 when Mr George Adams opened his first butchers shop in Lincolnshire, so the Adams brand was a British heritage.

Today Tulip has seventeen sites throughout the UK and employs around 8,000 people.

In the past twelve months it has carried out an £8m expansion plan at the Ruskington plant, which is the largest factory for the supply of cocktail sausages and Scotch eggs to the retail sector.

The expansion plan saw the factory grow by 25 per cent, with the creation of up to 45 additional full-time jobs. The work also included a new production line and state-of-the-art upgrades to its refrigeration, power and waste facilities.