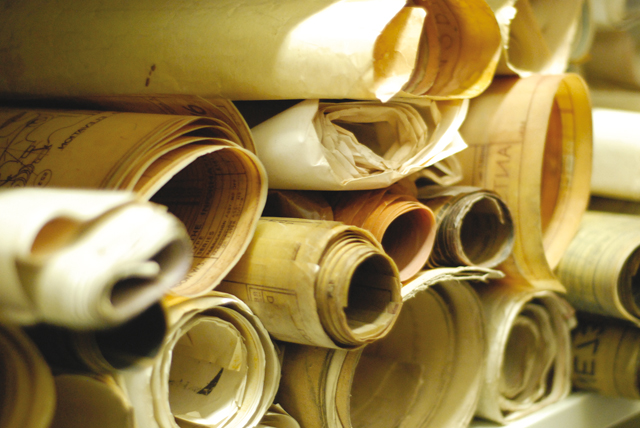 An incredible archive of documents, photographs and films revealing in exquisite detail the prominent role Lincolnshire played in Britain’s industrial revolution has been preserved.
A major heritage project is now underway to catalogue the Ruston Hornsby (Siemens) Archive, which spans 150 years of engineering heritage. Professor David Sleight, Dean for Public Engagement at the University of Lincoln, is one of the small group of heritage enthusiasts who have worked to secure the material for future generations to explore. Here he recalls how this unique project came about…

A chance conversation while I stared down the barrel of the lens of photographer Phil Crow first brought to my ears the news that there was a warehouse down Firth Road, in Lincoln, crammed to the rafters with historic documents going back over a century. Phil had been in-house photographer for Siemens in Lincoln and he and his former colleague Steve Wildman, now head of oil and gas for Siemens London, knew the riches it contained. This was back in 2010, and Siemens had just announced their investment in new premises at Teal Park. While that announcement was fabulous news for the city and the region, it meant the clock was ticking to find a new home for tonnes of papers, documents, books, photographs, films and other engineering ephemera stored in the old warehouse which would need to be vacated.

One of the delightful aspects of my role is that I get invited into so many forums across the county that help inform my work, and I had heard that a plan may be in the offing at Lincolnshire Archives. Few people knew that, after The Collection Museum opened in 2005, the underground cavern beneath it had not been kitted out because of a shortage of funds. Quite sensibly the decision had been taken to put the money into the public facing areas. But when you need archive space for thirty cubic metres of materials that must be kept in a light-, temperature- and humidity-controlled environment there really is only one solution: build it for special use. Linking the archive with the space to store it became the key challenge, and Steph Gilluly and her team at the Lincolnshire Archives have been pivotal in making this possible. They made the case for support to Councillor Eddy Poll, Lincolnshire’s Heritage Champion, and he offered his immediate support to secure the funding to get the archive vault ready in double-quick time.

The storage of the 150 films was easier. In the summer of 2011 the University of Lincoln had won the opportunity, against six other universities, to bring the Media Archive of Central England to Lincoln. We had to bid for and secure £500,000 of Film Council/BFI funds, to build a special environmentally-controlled vault the size of two tennis courts, and then move the 50,000 films and tapes from Leicester. Moving another 150 films from Firth Road to campus wouldn’t be a problem, would it? We had scoured the collection for tell-tale ‘red’ tins, these being nitrate stock legendary for their volatility and habit of sometimes exploding spontaneously on contact with air. The MACE team had been to the Siemens factory and taken away in their secure vehicle the nitrate films for sending to this national archive, now one of the only places that is permitted to store nitrate stock in quantity in the UK.

With my car reversed into the loading bay at Firth Road, I was joining Frank Carchedi, director of quality for Siemens. His immense commitment to the archive was being sorely tested that day, because his unwavering belief was that the collection must stay together at all costs – preferably close by in Lincoln – and made accessible to everyone as quickly as possible. The 150 films were the only part of the collection we were separating because of the specialist needs of storage – and I think he knew in his heart MACE was the best place in the whole of the Midlands for them to be stored.

As we carried armloads of tins to the car, every title on the cans was intriguing. They sparked Frank’s memories drawn from over thirty years working for engineering businesses in Lincoln. ‘Engineers to the World’, for example, what could that contain? Others with titles that hinted at Lincoln and the Cathedral, I couldn’t have hoped for us to find those, but sure enough we found three films about the Cathedral that day, and later Phil Hamlyn Williams, chief executive at the Cathedral, and I enjoyed our very own Cathedral film festival as we reviewed over two hours of documentaries. (For an opportunity to see a premiere of these films later in 2013 at the Cathedral, keep checking the Cathedral website for details.)

It is less than a mile from Firth Road to the Brayford Campus, but 150 films represented some 200,000 feet of celluloid, enough spliced end to end to stretch from the engineering works in Lincoln all the way to Gainsborough’s Marshall’s Yard and back again. Not only do we have cataloguing to do, we need to digitise the films to preserve them for the future, and that’s one of the main challenges for the whole archive. As I gingerly drove up Tritton Road thinking of the tank development that took place on these very fields, and with footage of the tank’s development in the back of the car, I had a very privileged moment – something I could never have foreseen growing up in the city in the 1960s and ’70s.

As for the rest of the archive, paperwork, books and photographic negatives all decay sitting in a warehouse for decades. By the time we got started on the move, some damage had inevitably occurred. We were so fortunate though that, during his working career, part of it spent at the Firth Road site, Ray Hooley had carefully put aside so many of these records and artefacts knowing that one day they would be cherished by others. It is always tempting to spring clean and factories are no different. Often the first thing to go is the old documents. Over many years, whenever he saw a pile of documents ready to be thrown, Ray asked if he could check through them before they went. Sometimes he even went against official advice and hid some parts of the collection away that would otherwise have been destroyed. Thank goodness he did: his corporate disobedience has turned into a civic contribution of great importance. Early indications are that the untapped potential of the Ruston Hornsby (Siemens) Archive is probably of national significance. If it helps us tell the story of engineering might that sent Lincoln machinery worldwide, it will help to ensure the restoration of Lincoln’s reputation for engineering and innovation.

The timing for that could not be better – just at the moment when the University’s School of Engineering (created in conjunction with Siemens) is getting into its stride, the new University Technical College is being planned, and just as other major companies are moving into the city to join the growing engineering community, we have secured a memory bank. It provides that lineage that enables Lincolnshire engineering to be proud of what they are achieving today, knowing that in decades, perhaps a century to come, people then will look back and show respect for their achievements and innovation as we do today.

HOW YOU CAN HELP
The first phase of cataloguing this vast archive needs volunteers who work or worked in the engineering industry to come forward and help describe the contents. The second phase will involve securing the funding to digitise as much as possible to allow online access for the public and researchers. If you’d like to volunteer to help please contact Dr Mike Rogers at Lincolnshire Archives on: mike.rogers@lincolnshire.gov.uk. If you would like to make a donation towards the preservation of, and growth in public access to, the Archive please contact Professor David Sleight on dsleight@lincoln.ac.uk